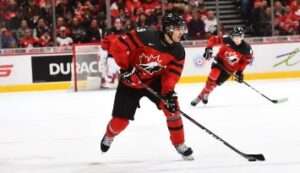 One of the biggest attractions for fans at the upcoming 2020 IIHF World Junior Championship is the most successful team of the history of the tournament – Canada. Last season was a disappointment for the Canadians, who failed to claim a medal on home ice for the first time ever. However, they have claimed a medal at all previous World Junior Championships held in the Czech Republic, and this year they return to the arena where they won gold in 1994.

Tomas Plekanec was chosen ambassador of the Canadian team. The long-time captain of the Czech national team played most of his 1,001 NHL games for the Montreal Canadiens. Near the end of his time in the league, he played 17 games for Canada’s other “Original Six” team – the Toronto Maple Leafs.

The 37-year-old Plekanec emphasizes the interest Canadian fans have in this event, stating: “The World Junior Championship is followed far more closely than the men’s World Championships over there. The fans are crazy about these young players, as there is huge interest in junior hockey in general.”

That’s also a reason why the last three World Junior Championships took place in North America – twice in Canada and once in the United States. “At the time of the World Juniors, more people watch those games on TV than the NHL,” said the current Kometa Brno centre.

Canada has taken part in every World Junior Championship so far and is the most successful country in its history with a total of 17 gold medals. That includes two separate stretches where the Canadians finished on top five times in a row – first from 1993 to 1997 and then again from 2005 to 2009.

During both of those five-year stretches, one of Canada’s titles took place on Czech ice. 25 years ago, the Canadians claimed gold at the same Ostravar Arena that will host this year’s tournament, although at the time it was called the Palace of Culture and Sport. The other occurred in Pardubice in 2008, with an overtime victory over Sweden in the final.

Expectations are always high for the Canadian national junior team, but this is especially the case at home, where the team receives much media attention. In the 11 previous World Junior Championships held in Canada, the home team had claimed five gold medals, five silvers and one bronze.

Tim Hunter’s team started last year’s tournament strong, crushing Denmark 14-0 in its first game. The first hitch came in the group’s final game when the Canadians fell 2-1 to Russia in a tight game for first place. That was a prelude to what awaited them in the quarter-finals.

Awaiting Canada was a hardworking Finnish team that perhaps underachieved in the group stage and finished third. Despite the troubles, the Canadians seemed on the verge of advancing, leading 1-0 into the final minute of the third period, when Aleksi Heponiemi scored the tying goal. Then in overtime, defenceman Toni Utunen struck the fatal blow, stunning the Canadian team and the fans in Vancouver.

Every year, Canada can rely on an incredibly deep roster of talented players, some of whom already have NHL experience and all of them either have been or will be drafted. This year in Ostrava, the team’s most notable player in the age group is centre Kirby Dach, the third overall pick in last year’s draft who currently plays for the Chicago Blackhawks.

It will be interesting to see if Cole Perfetti and Hendrix Lapierre get into the Canadian lineup. The two showed incredible chemistry together at the Gretzky Cup in Breclav this past summer, where they finished and second in tournament scoring.

Tomas Plekanec, ambassador of the Canadian team, says that it’s difficult to find weak players on the Canadian team. “There will be plenty of talented players, not only for Canada, but in the entire tournament,” he figures.

“What I always like about these tournaments is that some player, who was not expected to dominate, jumps out. Certainly there will be someone new, whether it be from Canada or any other team,” says Plekanec.

The head coach of the Canadian team is 59-year-old Dale Hunter. Hunter enjoyed a successful NHL career, most notably for the Quebec Nordiques and Washington Capitals, where he combined high offensive output and toughness. He played in the NHL All-Star Game in 1997 and is the all-time leader in penalty minutes during the Stanley Cup playoffs. In 2000, a year after he retired as a player, Hunter and his brothers (Dave and Mark, who also played in the NHL) purchased the OHL’s London Knights. For most of the time since, Dale has coached the team, except for a brief stint coaching the Capitals in 2011/12. Internationally, he led the Canadian U18 team at the 2013 Hlinka Memorial Cup.