The Comeback Kid: How Sam Bengzon found his way back to the hockey rink 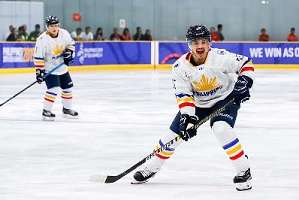 All the ice around him was not enough to stop hockey forward Samuel James Bengzon from heating up the SM Mall of Asia skating rink, in what would be one of the best moments of his 2019 Southeast Asian (SEA) Games run.

With less than six minutes left in the game and a Singapore goal tying it up at 2-2 just a minute ago, he found the barely open ice and went for the kill, hitting his first international competition goal to a wild response from the crowd.

“When I scored that goal, I went straight to where my family was,” he said, recounting how he skated to the glass barricade to share his triumph with his loved ones and fans.

From his composure at that moment, one could not tell that the 30-year-old was not even sure he would be in this arena this year. Go further back to two years ago, and he was not even a hockey player.

Bengzon first found his spot on the ice when he was 10. At the time, he and his cousins were more interested in figure skating. This was until an old coach approached him and asked if he wanted to try something else.

“I already saw Mighty Ducks and I was a big fan of the movie,” he said of the 1992 Disney hockey film. “Then a few months after, I tried hockey, fell in love with it, and kept playing.”

His Disney fantasy soon became a reality when Bengzon started competing in hockey meets until high school, also becoming a varsity baseball player in the process. But just before college, he felt he wanted to have a normal balance of schoolwork and social life, which led him to leave behind his childhood sport.

Instead of picking up his club for training nights like most of his contemporaries, Bengzon spent a decade away from the puck, building a family of his own and getting into the poultry and CrossFit training businesses. Incidentally, being a fitness coach kept him ready to go back into the rink anytime, as it honed his discipline and maintained his athletic form.

“In Crossfit, everything is about trying to learn. It teaches you discipline and knowing yourself,” he said. “So I think it really helps with the hockey aspect; I know myself and I know what I need to work on.”

What ultimately got him back in the fray was his being a dad. Last year, he and his wife were deciding which sport their four-year-old son should play. They settled on ice hockey.

Bengzon eventually realized that the best way to get their child interested in the game was for him to have a role model to look up to. Wanting to play again either way and with the support of his wife and kid, he took a jersey and went back to the rink.

“Most of the time, [my son] would beg to watch us practice. He loves skating, he loves the ice,” he said. “My wife, she knows not to wake me up after a night of hockey, so she brings the kids out of the room just so I don’t wake up.”

It was never going to be easy coming back from a ten-year hiatus, but Bengzon caught up with invaluable help from his teammates, who were kind enough to spend extra sessions outside of their weekly routine training him on the ice. He regained his form just in time for this year’s IIHF Challenge Cup of Asia, helping his team lead group A of the preliminary round and finish silver against the once 45th-ranked team in the world, Mongolia.

“It’s really nice to have Sam as part of our team, because ever since I was really young, he’s actually the one I look up to in the ice. The guy’s my idol,” said defenseman LR Lancero. Bengzon, during his first hockey run, was there when Lancero took his first step on the rink at three years old.

He added: “He’s a guy that I trust and depend on, not just him but all of my teammates, because it’s really good to have someone behind your back to support you.”

Now in the thick of his first SEA Games stint and with two international goals in winning games, Bengzon’s focus is to keep at it as his team faces powerhouse Thailand — which has not allowed a single goal from opposing teams.

What gives them confidence, he said, is a home court advantage like nothing any of them had seen.

“Thank you for all your support so far, the Facebook messages, the reposts. After the first win, I spent an hour before going to sleep just thanking everyone,” Bengzon said. “It really helped. Every small message like, ‘good job,’ we remember it.” 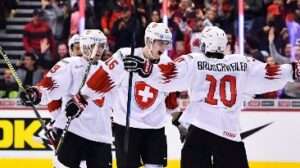 Switzerland’s Yannick Bruschweiler #10 celebrates with Nico Gross #16 in the game for bronze at the 2019 IIHF World Junior Championship.

By Organizing Committee – IIHF.com
The Swiss haven’t been among the favourites at the World Junior Championship recently. In fact, as recently as 10 years ago, they played in Division I. However, the team is coming off a successful tournament last season, reaching the semi-finals for just the fourth time ever after upsetting Sweden in the quarters. They eventually finished fourth after losing the bronze medal game to Russia.

Before the turn of the millennium, Switzerland was an “elevator team” that regularly moved up and down between the top two divisions of the World Junior Championships. However, since the expansion of the top division to 10 teams for the 1996 tournament, the Swiss have only been relegated once – that happened in 2008, and they were re-promoted the following year.

Switzerland’s only medal at the World Juniors came in 1998 in Finland, when the team built around later Colorado Avalanche netminder David Aebischer – who was later named the tournament’s Best Goalkeeper – beat the Czech Republic in the bronze medal game. Otherwise, the Swiss have finished fourth on three occasions, including 2002 in Pardubice and Hradec Kralove.

Switzerland’s latest fourth-place finish came last year. Led by forward Philipp Kurashev – who led the tournament with six goals – the team only managed to win one game in the group stage and finished fourth, but in the quarter-finals upset the favoured Swedes 2-0 on goals by Yannick Bruschweiler and Gianluca Burger and a shutout by Luca Hollenstein.

In the semi-finals, however, the Swiss had a poor start and ended up losing 6-1 to the eventual champion from Finland. In the game for third place, the Swiss stayed close for two periods, but Russia eventually pulled away and won 5-2.

Last year’s Swiss lineup included several 2000-born players, so the Swiss will have one of the more experienced teams at this year’s tournament. The player who will receive the most attention is 19-year-old defenceman Janis Jerome Moser, who recorded two points in seven games last year. Moser also played three games for Switzerland at the senior World Championship in Slovakia before leaving due to an injury.

The Swiss defence will be further strengthened by New York Rangers draft pick Nico Gross, who was an alternate captain at last year’s tournament despite his age, and is expected to be the team’s captain this year.

Forward Valentin Nussbaumer had three points in last year’s tournament, and could lead the team in scoring this year. The Arizona Coyotes draft pick currently plays for the Shawinigan Cataractes in the QMJHL, with 19 points in 25 games so far.

The Swiss should be solid between the pipes with returning goalies Luca Hollenstein and Akira Schmid. Hollenstein currently plays for EV Zug in the country’s National League, while Schmid plays for the Omaha Lancers in the USHL. The two split duties last year in Canada, with Hollenstein getting the start in all three final-round games.

Before the tournament in Ostrava and Trinec, there were many changes to the coaching staff of the Swiss national junior team. After three years at the helm, Canadian-born Christian Wohlwend has chosen to concentrate on his duties with HC Davos. His replacement is Thierry Paterlini, an experienced youth coach who worked for the U18 team for five years, reaching the quarter-finals twice. He was an assistant coach under Wohlwend at last year’s World Juniors.

After a summer camp in Vierumaki, Finland, the Swiss team played in a Four Nations tournament in Piestany, Slovakia in November, where it beat Norway and Slovakia and lost to Germany. The team reconvenes under Paterlini on 10 December, and seven days later will move to Kravare, Czech Republic, where they will train until the beginning of the World Junior Championship. They will also play a pre-tournament game against Canada in Brno on 19 December.