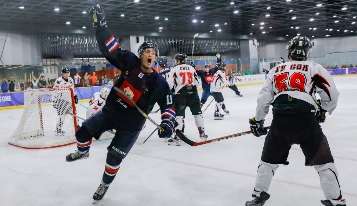 Thailand produced a flawless week of hockey as it powered to gold in the Southeast Asian Games in the Philippines. The Thais won all six of their games with an aggregate score of 75-3, sweeping all before them in this five-team tournament.

After cruising through the group stage, Thailand did not allow a goal in the playoffs, hammering Malaysia 15-0 before defeating surprise package Singapore 8-0 in the gold medal game. The Philippines, defending champion in this tournament, claimed bronze with a 17-1 success against Malaysia on Sunday afternoon at Mall of Asia rink in Pasay in the Manila region. The fifth team in the competition, Indonesia, failed to advance from the group after losing all four of its games. Despite that, goalie Sangga Putra had the second best save ratio in the competition after stopping 146 shots in the four games he started.

Last time at the SEA Games, Thailand lost out in the final against a Philippines team taking its first steps on the international stage after becoming an IIHF affiliate in 2016. This time around, revenge was in the air.

“We worked really hard since the last SEA Games to turn that loss into a win,” said defenceman Ken Kindborn, the leading scoring in this year’s tournament. “So right now I’m very proud and very happy, but also really humble.”

In 2019, teamwork made all the difference. “We really stuck to what we have to do as a team,” Kindborn added. “Everyone knows their role and everyone bought into it 100%. We had the right chemistry in everything, from how we eat, what we do off the ice, on the ice, how we warm up, even how we spend our time off.

“Everything has been amazing for the four months that we’ve been preparing for this.”

The gold medal game went according to the form book. Thailand was dominant from the start and opened the scoring on five minutes through Papan Thannakroekkiat. But Singapore stood up well in the face of the onslaught and even withstood a 5-on-3 power play for the Thais midway through the frame. It wasn’t until the last minute of the period that the resistance faded as goals from Kindborn and Tewin Chartsuwan opened a 3-0 lead.

After that the contest was effectively over. Thailand kept the scoreboard ticking over regularly as Singapore found it hard to generate much offence. The shot count read 55-6 after 60 minutes of often one-sided play. Fittingly, Kindborn scored the eighth and final goal, taking him to 5 (2+3) points for the game and cementing his position as the tournament’s leading scorer with 28 (10+18). Swedish-born and with three seasons of experience in division two with Ulricehamns IF, the 24-year-old is a big player on the team. His play for Thailand’s second goal in the final highlighted his contribution. Collecting the puck at the point, he shaped to shoot before spotting the opportunity to advance into a more dangerous position. With the Singapore defence unsure what to expect, Kingborn cruised into position between the hashmarks before wiring a wrister into the net.

However, this is not a team built solely on players who learned their hockey abroad. Local talents like Thannakroekkiat, 24, and 18-year-old forward Phanaruj Suwachirat also had a big impact at this tournament. The former topped the scoring from the blue line with 10 (6+4) points, the latter had 14 (8+6).

This was Thailand’s second tournament of the season. Last month the kingdom came close to progressing through the opening phase of Olympic Qualifying but lost out to Chinese Taipei in the last 70 seconds of the decisive group game in Hainan, China. And, under the guidance of Finnish head coach Juhani Ijas, also noted for his work in developing the national program in the UAE before moving to Thailand in 2016, the team will contest its second world championship campaign later in the season. After a Division III qualifying campaign last term, Thailand goes to South Africa in April for the Division IIIB tournament with Kingborn hoping for more progress.

“Our goal is to move up from that stage,” he added. “We want to advance Thai hockey now. We’re on the right path, we just need to make those next steps and that’s what we’re going for.


Despite coming up short in the final, this was a great tournament for Singapore. Before the event, most expected the host nation and Thailand to dominate the conversation about the gold medal, but Singapore had other ideas. In the group phase, it pushed the Philippines all the way, eventually losing 3-5 to two goals in the last minute of a gripping encounter.

Then, in Saturday’s semi-final, Singapore got its revenge in similarly dramatic fashion. The host nation blew a 2-0 lead and when Christopher Wong put Singapore 3-2 up in the 49th minute, the shock was very much on. EJ Sebug thought he had saved the game for the defending champion when he made it 3-3 with 60 seconds left in regulation, but this time the last-gasp winner came at the other end. James Kodrowski scored for Singapore with 21 seconds on the clock to seal the country’s first ever victory over the Philippines and guarantee the team a medal. “Nobody was expecting us to win and we knew that we had nothing to lose,” defenceman Ang Yu Jin told the Philippine Daily Inquirer.

Singapore’s roster is a mixture of local youth and expatriate experience. Kodrowski, who potted that semi-final winner, is a 40-year-old born in the USA. He played in the NCAA at the turn of the century and, since moving to Asia, has become a key figure on the national team. He scored heavily at last season’s Challenge Cup of Asia and was his country’s leading scorer here. Head coach Robert Martini, 31, also brings NCAA experience after captaining the University of Niagara’s team in 2011/12. The Ontario native has been coaching in Singapore since 2014/15. Among the locals, veteran defenceman Chew Wee, 40, has been on the national team since 2012/13 and plays a key role in nurturing the next generation of Singaporean talent.

And there is genuine potential among the country’s youngsters. Christopher Wong is still only 17 but has played in two CCOA events and got his first international goal here in Pasay. Bryan Lee, aged 16, was the leading scorer at last season’s CCOA and contributed 3+1 this time around. And newcomer Ethan Redden, 18, was born in Singapore but has North American experience with Nicholls School in the CISAA. His debut tournament yielded 8 (6+2) points.

The Philippines came into the tournament as defending champion and, with home ice advantage, was expected to be a strong contender again. However, it found life tougher than expected in the group phase, struggling to beat Singapore before losing 1-10 to Thailand and taking second place in the five-team round robin. Then came that semi-final surprise from Singapore, sending the Eagles to the bronze medal game against Malaysia. The team’s leading player, Swiss-born Steven Fuglister, admitted after the game that the Filipinos needed to be more clinical with their chances, and they certainly learned that lesson ahead of the medal game. Fuglister scored four, matched by Kenneth Stern, as Sunday’s bronze medal game ended in a 17-1 victory over Malaysia.

Fuglister, 33, is eligible to play thanks to his Filipino mother. Born in Kloten, Switzerland, he and his brother Jeffrey learned their hockey with their hometown team. Jeffrey went on to play for Switzerland at the World Juniors in 2010, while Steven spent several seasons in the top Swiss amateur league with Bulach and Winterthur before taking up a job offer in the Philippines and resuming his hockey career with the Manila Griffins and later the national team. He finished the tournament with 21 (12+9) points. Carl Montano was the leading local-born player, second in the team’s scoring with 14 (3+11). The roster also featured three teenage prospects, with 19-year-old Aro Regencia already getting game time on the first line alongside Fuglister.

Plaudits for the host


bronze medal for the Philippines in the hockey tournament helped the country to top the overall medal-table in this Olympic-style multi-sport event. And success in competition was matched by a positive response to the organization of the Games.

Kindborn summed up the efforts of the host nation: “It’s been a great tournament and the hosting has been excellent. It all worked perfectly, the hotel, the transportation. The Philippines did a really good job as host.”