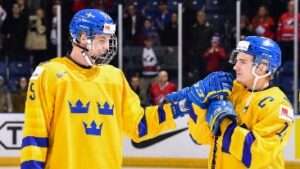 Their program is among the most sophisticated in the world, regularly finishing among the top teams at the World Championships and sending players to the NHL in record numbers every year. For those reasons, the Swedes will be among the medal favourites in Trinec and Ostrava. At last year’s tournament in Canada, however, they were upset by Switzerland in the quarter-finals, which continued an unwelcome trend. The Swedes haven’t lost a group-stage game in more than a decade but have only won one title in that time and only one medal – a silver – in the last five years.

“Sweden’s youth development system is different than the Czech Republic only because it has a much larger base of youth players,” explains Martin Hostak, comparing two programs that he is quite familiar with.

The former right winger, and current general manager of Czech Extraliga club Berani Zlin, knows Swedish hockey well after playing nine seasons for MODO Ornskoldsvik, Sodertalje SK and Lulea HF. That’s one of the reasons he was asked by the Organizing Committee of this World Junior Championship to take on the role of team ambassador. In this role, the long-time Czech television hockey analyst has the task of attracting fans to Trinec and Ostrava from Sweden, where the name Hostak still resonates.

Sweden has gained a reputation as a top country for developing hockey players despite a relatively small population. That’s because, says Hostak, “they just let the boys play there and then choose the best ones for the academies, where the hockey training really starts.” As for the atmosphere in Swedish dressing rooms, Hostak adds: “It’s highly competitive and the guys really work on themselves and want to get better and better.”

A traditional hockey country, Sweden has participated in all 43 World Junior Championships so far, and its 18 medals is the fifth-highest total of any nation. After taking bronze at an unofficial championship in 1975, the Swedes won their first official medal 1978. Mats Naslund, a member of the Triple Gold Club and a Montreal Canadiens legend of the 1980s, starred for the silver-winning team in his future home city.

The was followed by two more bronzes in the next two years and then a gold medal for Sweden at the 1981 tournament in West Germany. The team’s biggest star in those years was Patrik Sundstrom, who went on to several fine seasons with the Vancouver Canucks and New Jersey Devils.

For a long time, that was the only title for the Swedes at the World Juniors. They won a silver and a bronze in the late 1980s, followed by a string of five medals in a row between 1992 and 1996, when they earned four silvers and one bronze. Among those teams were future stars Peter Forsberg, Markus Naslund, Fredrik Modin and Mattias Ohlund.

After losing to Canada at the 1996 final in Boston, the Swedes would have to wait 12 more years to win another medal. At the 2008 tournament held in Liberec and Pardubice, the team coached by Par Marts that included Victor Hedman, Magnus Paajarvi and Patrik Berglund again took silver. Then in 2012 they won their second title after an overtime win over Russia, with Rickard Rakell, John Klingberg and Filip Forbsberg under coach Roger Ronnberg, who formed the core of the senior men’s team that won the 2017 and 2018 World Championships.

The Swedes continued their group-stage dominance in Victoria, Canada, winning all four games against Finland, Slovakia, the USA and Kazakhstan to top the group. Their winning streak was threatened in their third game when the Americans erased a 4-0 deficit in the last 11 minutes of the third period, but Adam Boqvist scored in overtime. However, success in the group stage once again failed to translate into a title as the Swedes were defeated in the quarter-finals by Switzerland 2-0, despite being heavy pre-game favourites. It was the first time since 2006 that Sweden failed to reach the semi-finals.

Who among the Swedes could shine? “Philip Broberg and Adam Boqvist were at last year’s tournament. It is definitely worth watching them; they have the potential to become stars on the world stage in the future,” says Hostak.

Philip Broberg is among the modern style of defencemen who do not like to just take care of their own defensive zone. On the contrary, he is an extremely fast, mobile player who reads the play well and can keep his team stable. That was one of the reasons he was highly rated entering last summer’s NHL Entry Draft, where the Edmonton Oilers chose him ninth overall. However, the Orebro HK product, who also played for AIK Stockholm in the past, has not yet gone overseas. This year, he is gaining valuable experience in the SHL with Skelleftea AIK. The 18-year-old won gold at the U18 World Championship this past spring, and also played four games at the last year’s World Junior Championship. This year in Trinec, he should be called upon to play a more prominent role on the team.

Adam Boqvist is a year older than Broberg, with whom he shares a similar playing style. He is definitely not a stay-at-home defenceman. Rather, Boqvist is extremely mobile and dynamic, and hardly ever loses one-on-one battles in the neutral zone. An even bigger offensive contributor than Boberg, the 19-year-old Hedemora IK product went through the Brynas Gavle system and was picked eighth overall by the Chicago Blackhawks in 2018. After a fantastic 2018/19 season with the OHL’s London Knights, he started this season playing professionally with the AHL’s Rockford IceHogs. At the end of October, he was called up to Chicago for the first time.

It will be interesting to see some members of the reigning U18 World Champions, who certainly have a chance to appear at this U20 championship. Particularly interesting is the trio of centre Karl Henriksson (Sodertalje SK), highly-rated 2020 Draft prospect Lucas Raymond (Frolunda Gothenburg) and pure goal-scorer Alexander Holtz (Djurgarden Stockholm).

The head coach of the Swedish national junior team is a position that is often referred to as the prelude to joining the men’s national team, and 41-year-old Tomas Monten is off to a good start. He started coaching at age 23 in Farjestad Karlstad’s system and then moved on to Mora IK, Djurgarden, Timra and Linkoping at the club level. This will be his fourth year at the helm of the Swedish team at the World Juniors, with a silver medal from Buffalo two years ago in his trophy case so far.

Preparing for the championship

The players will reconvene on 16 December for the start of the pre-tournament camp, where they will be joined by those from North America. Sweden will then play a pair of pre-tournament games in the Czech Republic – on 20 December in Frydek-Místek against the Czechs and against the USA two days later in nearby Cesky Tesin.