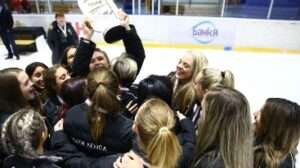 South Africa won the 2020 IIHF Ice Hockey Women’s World Championship Division III in a dramatic fashion. Before the last day of play in the Winter Palace in Sofia there was a possibility for a four-way tie for first place, but the first game on Tuesday destroyed that intriguing option.

South Africa defeated Lithuania 4-2 and finished the tournament with 12 points. In the first period 16-year-old Lithuanian star Klara Miuller scored her event-leading ninth goal and tied the game at 1-1. Tarryn Keuler and Inge Marais tallied a pair in seven minutes during the second for South Africa’s 3-1 lead, but just 28 seconds before the intermission Nomeda Burneikaite stroke on a power play for the Baltic country.

Dalene Rhode had her second goal of the game in the start of the third and her team was all over the Lithuanians with four consecutive power plays and 15-2 shots advantage in the period (43-9 in the game), but the score remained 4-2.

And then the long and tense waiting began. In the last game of the tournament Romania (at that moment with 9 points) needed a regulation-time victory against Belgium (6 points) to take first place and get back to Division II Group B. The host team Bulgaria already won convincingly its last outing 5-0 over the team from the Chinese island of Hong Kong and relied on the same development to get the bronze medals with 8 points. But Belgium was playing for silver and had a great support from the South African team on the stands.

Romania had two power plays in a row and five seconds after the second one expired, Ana Voicu opened the scoring in the 14th minute. In the end of the period Femke Bosmans had the equalizer. The second period was decisive with three more goals for Belgium – two in a row by Lotte de Guchtenaere and one by Valentine Maka. Romania’s goaltender Andrea Kurko was replaced by Nadina Niciu after allowing four goals on 10 shots, but it was too late for a comeback. In the third Romania had a 14-5 shot-on-goal advantage, but there was just one goal – 49 second before the end, again scored by Voicu – 2-4. So South Africa won the division ahead of Belgium and Romania.

“We always knew that it would be a tough game for Romania because Belgium looked better as the days were going on. We are grateful for what was happening,” said Andre Marais, the smiling head coach of South Africa. His team started the tournament on the wrong side – an 11-4 loss to Romania, but then was able to turn the things around with four consecutive wins: Belgium 4-3, Hong Kong 2-1, Bulgaria 2-1, Lithuania 4-2.

“The first game was tough for us because as a team we really didn’t know what to expect. We had many games against men’s teams, but not so much against women’s teams. We haven’t had a lot of preparation for games against organized opposition. So after this bad start we had few things to address. The ladies and our team really dedicated themselves to defence. South Africa won the rugby World Cup this year and we used that as an analogy, because our defence was so good there, and I said to the girls that this has to be the model to use. And that has been our secret – stepping hard and taking the team deep into the third period, where we can snatch it,” explained 38-year-old Marais, whо played in 18 men’s World Championship tournaments (12 in a row; 2008-2019) and has been head coach of different South African teams on the world stage since 2009.

“We stayed the same all the way through and our commitment to the team was to play three lines. I don’t believe in playing 10 players, I believe in using the whole bench and I’m trying to use that to get momentum later in the game. Our goalkeeper Shaylene Swanepoel played really well, especially in the moments when we needed her. I don’t think her saves percentage shows how well she played in the minutes where we really, really needed her,” continued Marais. 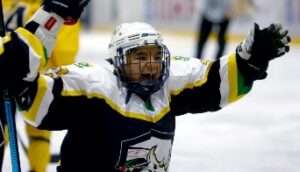 South Africa didn’t score a power play goal at all despite 19 chances to do so. The team was next to last in the tournament in penalty killing (72.7%) and save percentage (81.6%), on 4th place for scoring efficiency (13.5%). But they were on the top of the most important final ranking for points and earned the promotion to the Division II Group B for the 2020/2021 season.

“It’s the moments for me. The ladies believed and stuck to the game plan – to be the hardest team that they can be to play against and the chances will come to us. We don’t need always 30 shots in a game, but if we can keep the team tight and if we can tire the opposition, we can play hard hockey and then often things go your way, “said Marais, who has been the head coach of the women’s national team for a sixth season.

Four years ago it was almost the other way around. The tournament was also in Sofia and South Africa won its first game against Romania 3-2 in OT, then they defeated Bulgaria 7-3 and were closing to their first promotion, but lost 2-3 to Hong Kong in the final day. Then the Asian team had to wait the last game, hoping that Bulgaria will beat Romania. It didn’t happen – the host lost 3-8 and Romania finished in first place, Hong Kong was second, South Africa – third, Bulgaria – fourth. In the last five years Bulgaria had only one win in 18 games played on the world stage. This time the team won three of five games, but finished on fourth place once again. The star player was Veronika Metanova (7 goals), who was at Concordia University from 2013 to 2017, but the veteran players Tina Lisichkova (3+4) and Stefani Stoyanova (5 assists) had a huge impact as well.

“Bulgaria played better hockey than the last years and the team showed discipline, which was lacking before. Everyone is realizing how important is to raise your level, just to play in these championships, because teams are always coming up from bottom. Last year was Ukraine, couple a years ago was Croatia, in 2015 – Romania,” Marais described the level of the Division III.

“For us it was more that we have to improve our skills, we adopted a specific training program and we have a Swedish company that is involved with us, helping us using the off ice time and the good weather condition that we have to train outside. The ladies have never been as fit and in condition as they are now, which was shown. We dedicated ourselves to skills development, little bit less tactics, so to say lets get skill and that should help us through. We had training camps once a month from August to November and we came earlier in Sofia to get used to the ice surface, to get them in environment earlier and spend more time as a team and that’s also a big thing about this group – they are real team, they love each other, they do a lot together and having fun. It’s that commitment to each other that helps them in the times when the games are getting tough.”

This was South Africa’s 13th showing at Women’s World Championships. In the first seven years (2003-13) there were a total of 3 wins. Andre Marais took over the head coaching job in 2014 and since then the team had five third-place finishes in a row and had two wins every year except the first under him. This time South Africa was triumphant in Sofia and now the country has a top finish in each IIHF category in which it has participated.