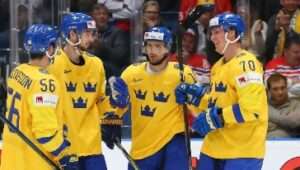 Sweden, beaten in its first three games under new head coach Johan Garpenlov, hit back hard in Russia to win the Channel One Cup. Tre Kronor defeated the host nation and the Czechs, coming out on top in the latest stage of the Euro Hockey Tour despite a painful 1-5 defeat against Finland in the middle game of its three.

The Finland game was also notable for Frans Tuohimaa’s empty-net goal. There’s nothing very unusual about a shot from beyond the red line going into an unguarded net, but Tuohimaa is a goalie. Goaltenders rarely turn goalgetters, but this was a memorable exception.

However, Garpenlov’s team was the success of the tournament – and the head coach had every cause for relief as it bounced back from a dismal display in the Karjala Tournament last month.

“It feels really good,” the head coach said. “I’m happy for the guys, they put so much work into this.”

Sweden began with a statement of intent in its first game in Moscow, defeating Russia 4-3 despite long spells under pressure against the tournament host. The Red Machine topped the shot count 46-19, but never really recovered from going 0-2 down in the first period.

“We had a good first period and got some goals,” Garpenlov added in a TV interview after the game. “We took a hold of the game, which it felt like we never did in the last tournament. We talked about how we wanted to do that here and we went out to get a rapid return.”

Russia came second in the tournament and put on a grandiose spectacle in Sunday’s game against Finland. But, despite winning 2-0 in front of 67,877 fans at St. Petersburg’s Gazprom Arena in a Winter Classic, there were still questions about Alexei Kudashov’s team after the competition. The Russian media raised concerns about the team’s defensive frailties after the 3-4 loss against Sweden was following by a 3-3 tie against the Czechs. Russia won that in a shootout and tightened up its game to shut out the Finns, only to face renewed criticism for boring hockey that failed to excite the big crowd.

Kudashov, meanwhile, pointed out that games against Finland are traditionally low-scoring affairs. “It was a tough, tight game,” he said. “Against Finland it doesn’t happen any other way. How often have you seen the Finns allow opponents to produce bright, attacking hockey? They have a disciplined team that is strong on defence, especially on the smaller ice. They do not open up and it’s hard to get behind them. You saw it in the World Championship and today was the same. We study the opposition; we look for their weak spots. Today we had a plan to win the game, and we did it.”

Finland took third place in the tournament and drew level with the Czech Republic in the overall Euro Tour standings. The Czechs, meanwhile, followed victory at the Karjala Cup with a fourth-placed result here.

Good omen for 2020 IIHF Ice Hockey World Championship host Switzerland as the Swiss national team won their home tournament of the December International Break in convincing fashion. It was their second tournament win in just over a month after having claimed the Deutschland Cup in November.

Swiss defenceman Romain Loeffel scored four goals in his country’s 8-2 victory over Russia ‘B’ at the NaturEnergie Challenge in Visp. The 28-year-old became only the second man ever to score four for the Swiss in the modern era, following Felix Hollenstein’s haul in a 20-1 victory over China in 1994. Loeffel is the first blue liner to hit four in one game for the Swiss.

“I had no idea these were so historic,” he said after the game. “I was mostly just happy for the team that we put on such a great performance. And of course it’s great to score four goals. I’ll keep my stick and the pucks that I scored with in a place of honour when I get them home.”

Switzerland’s emphatic victory in that game followed a 5-0 semi-final win over Norway as the host nation topped the table in this mini-tournament. Simon Moser scored twice against the Norwegians, while Enzo Corvi had three assists.

Russia started the tournament with a shootout win over Slovakia, recovering from 0-2 to tie it 2-2 in regulation. Norway defeated the Slovaks 4-1 for third place

In the Hungarian capital of Budapest, Belarus came out on top in a six-team tournament within the Euro Challenge framework. The Belarusians defeated France 3-2 in the gold-medal game after topping its group ahead of Korea and Ukraine.

Head coach Mikhail Zakharov admitted that he could not remember the last time Belarus won two tournaments in a row. Earlier this season Belarus won in Liepaja, Latvia. “Last year, we lost every tournament we played,” he said. “In recent years, we’ve found it tough to win even one tournament in the Euro Challenge, never mind two.”

Zakharov also noted that he had a more experienced and skilled roster in Hungary. Andrei Kostitsyn was a key player, scoring twice in the final against France, while Nick Bailen had two assists in the same game.

However, there was a curious conclusion to the group stage meeting between Belarus and Ukraine. In the 43rd minute, an injury to Ukrainian goalie Bogdan Dyachenko meant the game had to be halted. The starting netminder, Oleg Petrov, had been injured earlier in proceedings and there was nobody else available to see out the rest of the play. Belarus was leading 4-1 at the time and was awarded the victory by that scoreline.

Korea took third place thanks to a 5-2 win over Japan in the bronze-medal game. Hungary got the better of Ukraine in the placement match-up.