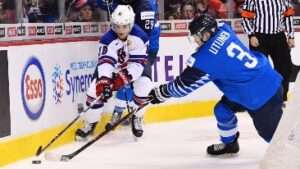 As the 2020 IIHF World Junior Championship gets nearer, we take a look at the United States, which will again be one of the medal favourites. The U.S. team is going to be stacked with drafted players and some current NHLers may appear on the roster too. The Americans will also try to extend a streak – in the last four years, they have brought home a medal from each tournament and they will try to make it five in a row in the Czech Republic.

The ambassador of Team USA is goaltender Petr Mrazek, who currently plays in the NHL for the Carolina Hurricanes. Before becoming a pro, he attracted attention at the 2012 IIHF World Junior Championship. “I remember it well. It was a great group of guys and we came together as a team really well. We enjoyed the tournament and I think it is a gateway to professional hockey for a lot of guys,” says Mrazek.

The World Juniors are a major international event also because all countries will send the best to the fight and viewers will be able to watch top players, including those from the United States. “There will be many future stars in the NHL and European leagues – many good teams. Canada and the USA will send the best teams they have, as well as Finland and Sweden – the hockey will be excellent. In Canada and the USA, this is bigger than the men’s World Championships. Scouts from every NHL team will sit there, so you are under close scrutiny,” Mrazek shares his own experiences.

Alongside Canada, Sweden, Finland, Russia and the Czech Republic, the USA is one of only six teams that have never been relegated since the World Juniors began in 1977. Despite this long history, however, the Americans had to wait nearly 30 years for their first gold medal – that came in 2004 in Helsinki when they beat Canada 4-3 in the final. Key players in that victory were goalie Al Montoya, who was chosen Best Goalkeeper of the tournament, and forward Zach Parise, whose 11 points placed him third in scoring.

Since then, the American youngsters have been dominant, winning the World Juniors three more times in 2010, 2013 and 2017. In addition to those four gold medals, they have also won two silvers and six bronzes – the first of which came in 1986.

The United States has been a dominant team at youth levels recently. In the last four World Junior Championships, it has taken home a medal from each one – last year it was silver. The Americans finished second in Group B and then beat the Czech Republic 3-1 in the quarter-finals.

After that, they won by a one-goal margin against Russia and advanced to the final, where they fell just short against Finland. Throughout the tournament, scouts, media and fans closely monitored the then 17-year-old Jack Hughes, who played in three different World Championships in 2019 and in June was selected first overall in the NHL Entry Draft by the New Jersey Devils.

Although Hughes is still eligible to play at this tournament, he is not expected to appear considering his role in New Jersey. The Americans could put their hopes in the arms of players like Oliver Wahlstrom, a 2018 first-rounder praised for more than just their hockey sense.

Same as goaltender Spencer Knight, defencemen K’Andre Miller and Mattias Samuelsson, and forward Jack Drury he’s a returnee from last year’s team. Although Knight was the backup goalie last year in Vancouver, in June he was selected in the first round of the Draft by the Florida Panthers and, as a 2001-born player, will have a chance to present his skills in the crease – in particular his calmness and mobility.

And those aren’t the only high draft picks on a U.S. team that will certainly be worth watching.

In April 2019, USA Hockey named Scott Sandelin as head coach of the national junior team, who was an assistant coach of last year’s silver-medal team. As a player, Sandelin played in the NHL for the Montreal Canadiens, Philadelphia Flyers and Minnesota North Stars, as well as in the AHL and NCAA. At the 1984 World Juniors, he was the captain of the American squad and two years later also participated at the senior World Championship. He has spent most of his coaching career in the NCAA – since 2000/01 he has been head coach at the University of Minnesota-Duluth.

Preparations for the tournament

After the World Junior Summer Showcase, the Americans attended a training camp in December where the roster was finalized. Just before the tournament, the United States played exhibition games in the Czech Republic against Sweden and Germany. 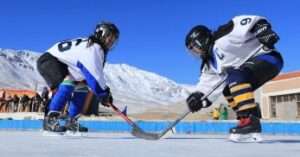 The Ladakh Women Ice Hockey Foundation (LWIHF) organised its second yearly Ice Hockey tournament in collaboration with Pangong Youth Cooperative Society for Environment and Care (PYCSEC) at Phobrang village in Changthang. The village lies at an elevation of 14,635 feet above sea level in Ladakh from 15th to 18th December 2019.

LWIHF was formed by the female Ice hockey players of Ladakh in 2015 and has been engaged in various activities since then to promote Ice Hockey in the region and the country. It is the highest altitude game of ice hockey in the world.

The ice hockey season in Ladakh lasts for roughly two-and-a-half months. In this period, different clubs and village associations organise winter camps and tournaments. But most of these tournaments are open only for the men teams and individuals. Keeping the scarcity of tournaments for women, LWIHF decided to organise a tournament specifically for the women teams in January 2019 together with Chuchot Sports and Welfare Association in Leh, where four teams participated.

Keeping the positive impact of the 1st tournament, LWIHF organised the 2nd tournament in which 6 teams participated, namely Lalok team, JKP team, Kargyam team, SECMOL team, YAGM team and SAVE Changthang team. A total of 85 girls participated in the tournament. The tournament was funded by the District Administration – District youth services and Sports, Leh under the Khelo India Scheme: Sports for Peace and development. Indo Tibetan Border Police (ITBP) supported the tournament by providing dry ration for the players. 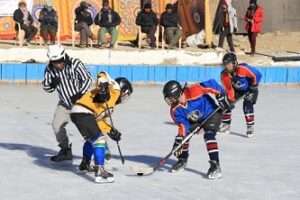 The final match was played between Lalok team and Kargyam team

The girls moved from Leh to the destination on 14 December and two buses were arranged, a community hall was arranged for the participants where the teams stayed together during the tournament period.

The final match was played between Lalok team and Kargyam team. The Lalok team emerged as the champions by scoring 6 goals and conceded none.

The Hockey Foundation earlier raised $30,000 for charity and donated the supplies used for the attempt to the Ladakh Winter Sports Club to help them finish the construction of their first full-sized ice hockey rink, helping to bring jobs and activities to the locals in that region of India.