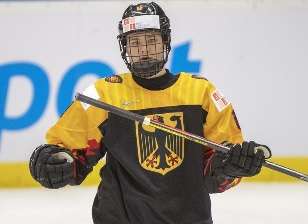 Like most kids in Germany, Tim Stutzle started out playing soccer.

He liked tennis, too, and fell in love with both. There was also another itch that needed scratching — hockey.

And like his Canadian, American, Russian, Swedish and Finnish counterparts, Stutzle eventually had to decide which one to pursue more seriously.

Stutzle heads the sport’s next wave of high-end German talent on display at the world junior hockey championship, one that hopes to follow in the footsteps of Edmonton Oilers star Leon Draisaitl.

Set to turn 18 in the middle of January, Stutzle is already excelling in his country’s domestic league against men, causing him to rocket up mock NHL draft boards.

And with scouts and general managers having made their yearly pilgrimage to the under-20 tournament, Stutzle hasn’t disappointed. The forward has five assists in five games, runs his team’s power play and is an assassin-like threat every time he touches the puck.

There’s constant chatter that comes with draft hype — a top-10 selection seems likely at this point — but at least for now, those around Stutzle have been impressed with how his feet have stayed firmly on the ground.

“At this age, it’s very impressive.”

Polite and soft-spoken, Stutzle doesn’t like discussing himself. He’s allowed his play on the ice at an event where many teammates and opponents are two years his senior tell the story.

“It’s a big honour there are so many people talking about me, but we need to settle down maybe a little bit,” said Stutzle, who has five goals and 23 points in 25 games with the Mannheim Eagles in 2019-20. “There’s a long season to go. Then the (draft) decision is made by the teams, not by me.”

“He’s a humble kid,” said German captain Moritz Seider, who went No. 6 to Detroit in 2019. “He’s performing every single night. He has to learn a couple things, but he will adjust quick and has a bright future.”

While the likes Canada’s star and projected No. 1 pick Alexis Lafreniere have grabbed a lot of attention at the world juniors — and rightly so — whichever team winds up taking Stutzle, who has some on-ice traits similar to shifty New York Islanders centre Mathew Barzal, won’t be disappointed.

But the six-foot, 187-pound Stutzle, who plays on a line in Mannheim with former NHLer Ben Smith, is just one of Germany’s young talents turning heads. He’s been skating with fellow draft-eligible 17 year olds John-Jason Peterka and Lukas Reichel — the nephew of former NHL player Robert Reichel — combining for six goals and 14 points in Ostrava.

Abstreiter said that while sometimes the stars align for a generation of players, credit also needs to go to the country’s hockey federation, which won a surprise silver at the 2018 non-NHL Olympics, and pro clubs for nurturing the talent.

“When extraordinary players get trust and confidence from their teams at home, they can evolve and they can improve and perform at a higher level, and learn a lot,” said Abstreiter, who suited up for Germany at the 2002 Olympics and the 2004 World Cup. “When young players in the German hockey league get a lot of important ice time, you see the results.

Tourigny, who has a player of his own projected to go high at June’s draft in the form of 67’s centre Marco Rossi, said Stutzle’s path reminds him of another meteoric rise from a smaller hockey nation.

“I remember a few years ago when (Switzerland’s) Nico Hischier had a really good world juniors,” the coach said of the No. 1 selection in 2017. “From there it built up and people talked more and more about him. He’s a good player. It’s a good draft year. If you look at the draft this year, there are some pretty good players.”

The Germans were unlucky to be dropped into a powerhouse Group B here — dubbed “The Group of Death” — with Canada, Russia, the United States and host Czech Republic.

They led the Americans midway through the second period and upset the Czechs for the country’s first victory at the world juniors since the 2014 event, but wound up fifth and have to play a relegation series against Kazakhstan.

Germany, which previously hadn’t qualified for the tournament since 2015, won the opener of the three-game set 4-0 and will look to close things out Saturday to secure a spot next year in Edmonton and Red Deer, Alta.

That’s of course Draisaitl’s backyard, but while Stutzle has tons of respect for the NHL’s second-leading scorer and has been buoyed watching the No. 3 overall pick in 2014 excel, he wants to chart his own path.

The way things are going, there could be a lot more Draisaitls, and eventually Stutzles, on the way.