Iceland triumphs in U20 Division III 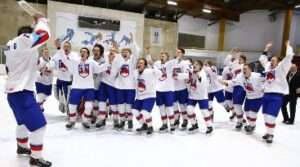 For the second time in the history of the IIHF Ice Hockey U20 World Championship program Iceland won a tournament in the Division III. The Arctic island country defeated Australia 4-1 on Sunday in the gold medal game at the Winter Palace in Sofia.

Eight countries, divided in two round-robin groups, participated in the event. The semi-finals and the placement games were held during the weekend in the Bulgarian capital.

“It’s a quite good bunch of players. We were growing game by game. Every time we were playing better. These guys stayed together, they were fighting for each other. We had a good goaltender and also we had some luck, but you need this in any sport,” said Iceland’s head coach Vladimir Kolek in front of the team’s dressing room. In the meantime the players inside were singing “We are the champions”.

The most difficult game for Iceland was in the first day of the tournament against the hosts. Miroslav Vasilev scored the first goal in the 9th minute, but Hakon Magnusson tied in the end of the period. Then Solvi Atlason and Kari Arnarsson tallied two goals in the second and Iceland had a 3-1 lead. In the start of the third period Vasilev netted on a man advantage for Bulgaria. 3:50 minutes before the end of regulation time there was another penalty against Iceland and the opposing team took a time-out, but couldn’t score on the power play. Then with 79 seconds left the goalie Ivan Stoynov went to the bench for an extra attacker and the efforts for the equalizer were realized for the delight of the home crowd. Kaloyan Vachkov, who plays for Nassjo in Sweden’s U20 Division 1, scored with just 18 seconds left on the clock. On high adrenalin the Bulgarians were quite opportunistic and went for the win in regulation, but lost the puck and Iceland scored on a counter-attack just one second before the buzzer after an individual surge by Unnar Runarsson.

“This game was entertainment for the spectators. We were lucky but the guys were working very hard and were ready to use their luck. It goes that way, sometimes the team has luck, other times – not at all. Because, if we had lost this first game, maybe the tournament could have evolved differently,” explained Kolek.

His team continued with wins against Mexico (5-2) and New Zealand (10-1) to finish first in Group A. Mexico defeated Bulgaria 5-2 for the second place and secured a spot in the semi-finals.

In the other group Australia went through undefeated: 6-1 over South Africa, 5-0 versus Chinese Taipei and 3-2 against Turkey. In the last game Turkey was leading 1-0, but the team from Down Under scored three times in the second period (5-on-5, shorthanded and on power play) and Seb Woodland, who was selected by the directorate as the best goalkeeper in the tournament, had 27 saves.

In the first semi-final Mexico had a 2-0 lead in the 7th minute, but Australia answered with three goals within 4:40 minutes in the first period, another three in 7:03 in the second and two more in 1:39 in the third. Just two of these eight straight goals were scored on power play. The captain Kenshin Hayashi had four in a row – from 2:2 to 6:2. In the end, the other captain, Gonzalo Hagerman, the best defenceman in the tournament, had his second goal of the game for the end result of 8-3.

Iceland and Turkey exchanged goals in 38 seconds in the first period in the other semi-final, but then the team from the north took control of the game with four goals in the second period – two apiece by Solvi Atlason and Axel Orongan, the best forward and top scorer in the tournament, and won 5-2 in the end.

Chinese Taipei won the game for 7th place 5-4 in overtime against South Africa after a goal by Huan-Yu Mi, who plays in North Toronto. After winning both IIHF tournaments (U18 and Men) that were staged in Sofia last season, the Bulgarian team had ambitions to strike gold again, but finished in fifth place after a convincing 6-1 defeat of New Zealand in the last placement game.

For second straight year Turkey won the bronze medals in this division after beating Mexico 4-2, which was relegated from Division II Group B in 2019. Two times Hagerman gave the lead to Mexico, 1-0 and 2-1, but Murat Kizilkaya and Sarp Demirezen tied the score and then Timur Turut scored two times in the third period.

In the big final Heidar Johannsson scored for Iceland at 18:08, but in the beginning of the second period there was a call for too many players against the team and Australia had a chance to tie the game. Instead Orongan scored a shorthanded goal to make it 2-0.

“We were feeling awful and yeah, it was a relief to score that goal, but we still had to play shorthanded and they had a chance to score. Our penalty killing was very strong today,” said Kolek, who is also in his third season as the head coach of the Icelandic men’s national team.

Orongan had another goal on a power play later in the period and 17 seconds into the third Heidar Kristveigarson made it 4-0. Jack Ransome had the only goal for Australia in the game three minutes later and the team with the kangaroo on the jersey finished second for second year in a row.

Iceland will be back to the U20’s Division II Group B for the first time since 2015. The last time this small country won a tournament in the U20 age group was in 2012.