Q & A With Douglas Boulanger 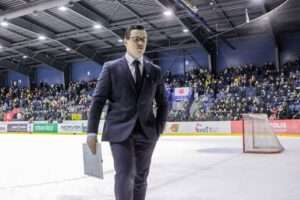 In a country where basketball dominates Douglas Boulanger and others are trying to change the culture of hockey. We had the great pleasure of speaking to Mr. Boulanger about his coaching career and Hockey in Lithuania.

You coach Lausanne U17 team for many years. How did you end up in Switzerland?

I’ve coached LHC U17 for 7 years and the U20 for one year. When I was fifteen years old, I was getting my first summer coaching job at the Quebec Remparts Hockey School (2003-04). At this camp, there was the father of a kid who was actually taking part at the camp…He really liked how I worked with the kids. Long story short, he offered me to come give private lessons to his son, in Switzerland. We developed a friendship and to this day we are still partner in several businesses.  It was the beginning 3 years later of Leysin Sport Academy and Open Ice Sports Services. One of the biggest hockey structures in Switzerland now, roughly 2000 kids per year coming through our door from every where around the world.


What made you want to take the coaching job of Lithuania U18 & U20 national teams?

When I was 15, I left during the hockey season to play in the USA (Summer came back home to work for the camp). My host family was a Lithuanian family named Shalna’s. Home of the former Biathlon Olympic Gold Medalist Alguimantas Shalna. He was in Lausanne, last week, for the Youth Olympics. They stayed at my house in Lausanne. What goes around comes around ! Their son Tautvydas is still my best friend to this
day !
Back in the day, Alguimantas was the team USA Biathlon coach. Then, a couple years later I took part in a show case in Klaipeda Lithuania for recruiting players and I met the President of Ice Hockey Federation back then (Petras Nauseda), which is now our team manager with the national teams. Petras was a friend of the Shalna’s. A couple years later, Dainius Zubrus took over the Presidency of the Federation and they were looking for a coach for the U18 and Petras put us in touch. That’s how I got in touch with the Lithuanian Ice Hockey Federation. 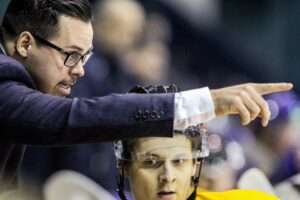 How much of an impact for the younger players is it to have guys like Zubrus and Kasparaitis involved over the past few years?

These two gentlemen are icons for the players and they are doing so much to develop Ice Hockey in Lithuania. In the past two years, I already saw the difference and the impact they have on the game. The club’s are also working hard to improve their development structures. It takes time, but they really are going in the right direction. Progression has been noticed for sure !


Lithuania was host to the World Junior Championships Division II Group A, where your team finished in 3rd position. Did Lithuania meet expectations?

In my opinion, we finished where we deserved to be. We can always do better, but all I can tell you is that our players gave everything they had in the tank for their country and i am extremely thankful and proud of them. It is a work in progress and we’ve noticed improvements in the last couple of years. Lithuanian’s Hockey is getting more professional and better ! We also had good crowds and support at the game. The committee did a wonderful job to organize and put together this event. 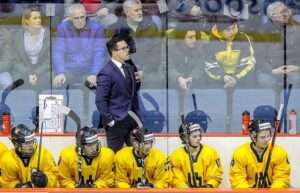 What players impress you at the World Junior Championships Division II Group A?

We have a lot of young and promising players. Our future looks good. To build a house, we need a lot of workforce and different field, which we have. Our players are accepting the roles we give them within the team and they play with a lot of HEART. It is a team sport and I don’t want to put a particular player in the front line. It’s all about the team !


In a basketball country like Lithuania, do you see hockey ever competing at the top level?

We are in the right direction to surprise other countries. It is a work in progress, but I strongly believe that we will go up in the next couple of years and we will be able to stay up, which matters the most. 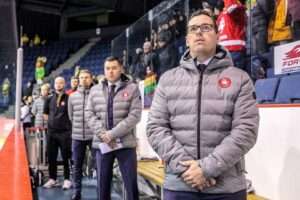 Standing up for the National Anthem of Lithuania

Do you see yourself one day coming home to Canada and coaching hockey.

If you read carefully these previous answers, I believe in destiny and I trust the process. I’m very fortunate and happy where I am. I’m taking a lot of pride in what I do and I’m surrounded by good hockey people to accomplish so…


Do you follow NHL or KHL if so what are your favorite Teams or Players?

Every morning, I watch the NHL highlights and some games. I like Pittsburgh this year and Mike Sullivan. They have been fighting with injuries and they still find a way to win hockey games. I still collaborate with several coaches in the summer. A good friend of mine is Newell Brown, which is the Assistant Coach for the Vancouver Canucks, so i also have to follow the Canucks too. We run a couple of summer camps together in the summer. He helps me to feed myself with new tendencies, so I can eventually feed my players in return. I’m extremely fortunate to share everything with him. It helps me grow as a coach.