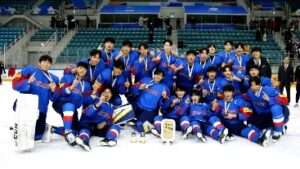 Offense wins games, defence wins championships. Korea’s juniors showed that they have absorbed that lesson with a perfect record on home ice at the 2020 IIHF Ice Hockey U20 World Championship Division II Group B. In a high-scoring tournament, the Koreans managed a solid 20 goals – but allowed just six to freeze out the opposition and win all five at the Gangneung Hockey Centre, host venue at the 2018 Olympic Winter Games.

Not surprisingly, goalie Hyung Chan Kim was a key figure. He stopped 94.17% of the shots he faced for a GAA of 1.07. His shutout in the 1-0 win over China was pivotal: had that game gone the other way, the gold medals may well have gone with it. But Kim kept the Chinese at bay, and Minwan Kang’s goal midway through the second period was enough to secure the verdict.

Kim, 19, is one of the youngsters benefitting from opportunities to play outside of Korea. After beginning the season on the books at Anyang Halla, a leading Korean team in the Asia League, he has since taken up an opportunity to play in the Czech Republic with Hvezda Prague in the fourth tier.

Another player with experience in Central Europe is defenceman Maejin Lee. He had two seasons in Slovakia with MHK Dubnica and was named an alternate captain for this, his first tournament at U20 level. The 19-year-old has also made four appearances for the Korean men’s national team. In Gangneung he was the pick of the blue liners: 6 (2+4) points and a +10 rating – the best in the tournament – from his five appearances.

Not only did Lee impress in defence, he also produced a crucial goal in Monday’s victory over Croatia. Although Korea ultimately finished six points clear of the pack with a 100% record, it still had a job to do in Monday’s final game against Croatia. Defeat would have given the visitor top spot and denied the host nation an instant return to Division IIA after relegation a year ago.

The early stages went according to plan, with Jinhyuk Mun’s fourth-minute goal putting Korea in front. But Croatia would not be shaken off so easily. The score was still 1-0 at the second intermission, and Sven Paulovic tied the scores at the start of the third. The teams traded two more goals before Lee potted the game-winner on 52:13. It was a little bit special as well: the defenceman collected the puck from his own goalie and set off down the ice. Evading two opponents in the left-hand channel, he moved inside and fired off a wrister from between the hashmarks to spark huge celebrations from his team-mates. A late effort from Hyosuk Kim sealed a 4-2 victory as Korea claimed gold on home ice.

While Korea was all about defence, the Netherlands and Croatia boasted some impressive firepower. Both countries scored more than 30 goals in their five games, and both were bolstered by big wins against an Israel team that found the competition tough in Gangneung. The Dutch won 16-1 and went on to take silver; Croatia had a 13-0 verdict and supplied the two leading scorers in the tournament. Dominic Canic was nominated top forward after posting 16 (4+12) points from five games; Leo Selitaj wasn’t far behind with 14 (6+8). China, too, overwhelmed the Israelis on its way to a bronze medal. All three countries were tied on nine points.

At the bottom, Israel finished dead last after allowing 50 goals in its five games. Belgium came fifth by virtue of its 4-1 victory over the Israelis on Monday morning.