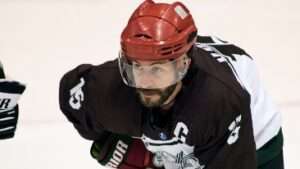 Mexico’s captain, Fernando Ugarte, is one of the great survivors of the sport in his country. He first appeared in the national jersey in the U20 championship in 2001 and he’s been a fixture on the senior team since making his debut in a Division II Qualification campaign the following season. Along the way, he’s taken part in three previous Olympic qualifying tournaments, wearing the ‘C’ in World Championship play since 2007.

So, after a tournament that saw the Mexicans suffer heavy losses not only against the Netherlands and Spain, but also lowly Chinese Taipei last December in the Olympic Qualification process, he’s well placed to take the longer view. In Barcelona he was one of just three players who featured in last season’s World Championship campaign. That made a tournament in which Mexico was seeded three out of four even tougher.

Among the absentees in Spain were Hector Majul and Carlos Gomez, the team’s leading forwards at last year’s home-ice World Championship Division IIB event. First-choice goalie Andres de la Garma was also unavailable. Ugarte, one of his country’s longest-serving players, found himself adopting a role as mentor as well as defenceman.

“Sometimes it’s like I’m a coach, but on the ice,” he smiled. “The thing is, I love the game. I came to this tournament because I love being a part of it, I love to give some feedback and help the younger players.”

Despite his country’s difficulties in Barcelona, Ugarte is optimistic about the future.

“Some of our players here are part of a new generation,” he added. “Some are older, but it’s a first international tournament for a lot of players. There are good players but, especially when coming from U18 or U20 hockey, it’s an important step. It’s hard for them to know how these tournaments are until they play here.

“Hopefully in a few years we can get our country promoted. We’re well established in the Division IIB now, but we hope in a couple of years we will be able to fight for the gold medal with our emerging players.”

The challenge in Mexican hockey remains unchanged. In a tropical climate, in a country where football is king and baseball remains the closest pretender to the crown, it’s not easy for the game to garner much public attention. The player pool is close-knit, often relying on family connections to keep the flame burning.

“I started when I was 10 and Mexico got its first ice rink,” Ugarte said. “But my father used to play back in the 50s. I learned to skate with him, he introduced me to the sport. But in Mexico, nobody talks about hockey so it’s difficult to get support and sponsors.”

Without support, especially financial backing, trips to Europe and beyond for international tournaments can strain the resources of Mexico’s players. A recently established league boasts just four teams – colourful names like Ugarte’s own Teotihuacan Priests, the Mayan Astronomers and the Aztec Eagle Warriors speak of the country’s rich history – but could be a starting point for more.

“Right now it can be difficult to keep people coming back year after year,” Ugarte admitted. “Now we have this league, we’re starting to work with it. It’s still small but we want it to keep people in the game.”