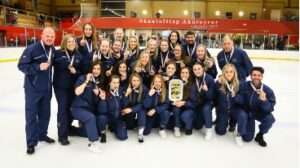 Australia will return to Division II Group A next year

The Trans-Tasman rivalry was relocated to the other side of the world as Australia and New Zealand battled it out for gold in the north of Iceland.

The decisive game of the Women’s World Championship Division II Group B tournament put the Southern Hemisphere in the spotlight – and ended with a convincing 7-1 Australian victory as the team secured promotion back to IIA after a single season.

The Aussies went in as favourite, undefeated in its first four games. New Zealand and fellow contender Iceland both had one loss on their records, but the Kiwis could still force a three-way tie with victory – and would take top spot if they could win it by four.

It might have been an outside chance, but New Zealand did everything to make it happen. An early goal from Caitlin Heale put the Ice Fernz 1-0 in front and an Australian penalty shortly after offered a fantastic opportunity to intensify the pressure. Instead, though, a shorthanded goal from Sharna Godfrey tied it up in the fifth minute and the scores stayed level until the intermission.

In the middle frame, though, Australia began to dominate. Outshooting the Kiwis 21-10, it jumped to a 3-1 lead on goals from Rylie Padjen and Ashlie Aparicio. The third proved one-sided, with Godfrey scoring twice more to complete her hat-trick and assisting on a goal for Kate Thiema, who was nominated as Australia’s player of the game. Natasha Farrier added a goal to her earlier pair of helpers as the game finished 7-1 to the Aussies.

Australia turned this tournament into a longer trip north. Swapping a southern hemisphere summer for the snows of Scandinavia, Stuart Philps and his team flew to Sweden for a week-long training camp in Tranas. The Aussies took on a couple of local women’s teams in exhibition games and worked on their pre-tournament preparations. All of that helped to set up a flying start in Akureyri, where a 6-1 victory over the host in the opening game set the tone for an impressive display.

Over the course of the tournament, Australia allowed just four goals and scored 39. The team that came closest to matching the eventual champion was Turkey, for whom goalie Sera Dogramaci produced a stellar display, making 39 saves to keep the score to 2-1. Dogramaci had some local knowledge to help her; she plays her club hockey in Australia with the Sydney Sirens.

New Zealand, defeated in the de facto gold medal game, went home with bronze. But there was also optimism after a relatively youthful roster proved that it could compete on the international stage. Jana Kivell, a 19-year-old rookie, led the team in scoring with eight points. Better known in the inline hockey world, she adapted well to the ice. Ice Fernz head coach Rachel Park told the Puck Yeah podcast: “I’m really excited for her. She’s definitely come into her own and the stats speak for themselves. It can be very nervewracking for a player in her position but we’re seeing her shoot the puck more. She’s got a killer touch and she can put the puck in the net.”

Park also spoke of the backing her team enjoyed in New Zealand and the importance of that support in helping to fund the long trip to Iceland. “We had lots of conversations about the future of women’s ice hockey and the girls we are inspiring along the way. We’re really appreciative of all that support and these girls are trying to do it for everyone back home.”

Host nation Iceland took silver and wrapped up proceedings with a 7-0 victory over Ukraine in the last game. Silvia Bjorgvinsdottir scored 2+1 in that game to finish with a tournament-leading 13 (8+5) points. The 20-year-old Akureyri native was chosen as the event’s top forward on her return to her hometown; at the end of last season she left the local Skautafelag club to join Sodertalje in Sweden’s Division 1. Team-mate and namesake Sunna Bjorgvinsdottir (no relation) made a similar journey. With 85 points between them in Swedish hockey this season, those two are the most successful of Iceland’s ‘exports’, a small group of players developing their careers in Sweden and Norway.

Another export, Australia’s Olivia Last, won the top goalie prize. She allowed three goals in three games, stopping 95.5% of the shots she faced. Like Bjorgvinsdottir, she’s also moved to the Baltic and is playing this season with RoKi in Finland. Australia’s captain, Rylie Padjen, twice an Australian national champion with Melbourne Ice, took the top defenseman honours.