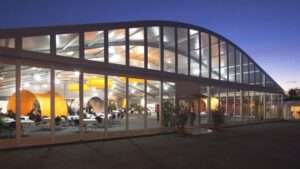 The new rink, which is expected to include indoor sports courts and a climbing wall, is due to open by June

Plans to replace an ice rink on the Isle of Wight will not be called in by the government despite an objection from Sport England.

The new £3m centre, next to Smallbrook Stadium, Ryde, was approved by the island’s council last month.

However, it could not be formalised until ministers were consulted.

Isle of Wight Council said Secretary of State for Housing, Communities and Local Government Robert Jenrick would not call the decision in.

The new rink will replace Ryde Arena which closed in 2016 due to unpaid rent.

Legislation states where a development would result in the loss of a playing field, and where Sport England has objected to the scheme, the secretary of state must be consulted, an Isle of Wight Council spokesman said.

He added: “The secretary of state wrote to the local planning authority to confirm that the decision will not be called in, and that it could be issued at the local level.

“Therefore, officers have issued the planning permission in line with the decision of the planning committee.”

Sport England previously said the scheme would result in the “significant loss” of a playing field.

Charles Johnston, property director of the public body, said it was “disappointed” by the government decision and added it maintained its objection “since the proposal isn’t in line with our playing fields policy”.

He added: “We will continue to work with the local authority to ensure provision for sport and physical activity in the area.”

Isle of Wight MP Bob Seely said: “The land is not a playing pitch, and consequently no loss of a sporting use arises from this development.”