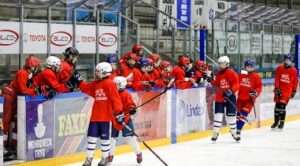 It is also noteworthy that 51 new girls and women have entered the sport in the just concluded the current season.

Development Consultant at the Danish Ice Hockey Union, Christina Benn, is pleased with the rises to the of ice hockey players to the clubs.

First and foremost, we welcome the fine numbers and we have established a central recruitment committee at DIU which will start in earnest when the society opens again. In everyday life, try to set the framework for the clubs so that they can recruit more easily. We have two national recruiting days – Ice Hockey, but in addition our member clubs are also making great efforts to bring in new teammates for current players.

It’s so inspiring to see, and we hope the clubs will also be inspired by colleagues around the country, says DIU’s development consultant.

As soon as ice hockey  starts up again, Denmark’s Ice Hockey Union has a new projects ready, which will hopefully end up with an increase in the recruitment of girl players and another increase in membership.