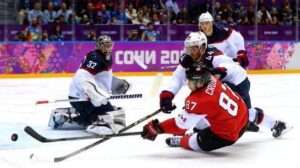 The U.S. and Canada drew the same Olympic men’s hockey group for the first time since 2010, guaranteeing the North American rivals will face each other at the 2022 Beijing Winter Games.

The International Ice Hockey Federation announced the Olympic seedings and groups Friday, using the world rankings. There was no change in the men’s top 12 from 2019 to 2020, given the world championship tournament, scheduled for May, was canceled due to the coronavirus pandemic.

The Olympic tournament format will remain the same. The group winners, plus the highest-ranked group runner-up, advance directly to the quarterfinals. The other eight teams go to a playoff round to determine the other four quarterfinalists.

The U.S. lost in the quarterfinals to the Czech Republic at the 2018 Olympics, where there was no NHL participation for the first time since 1994. It last earned a medal in 2010, taking silver behind Canada. Its last gold was the Miracle on Ice in 1980.

NHL commissioner Gary Bettman repeated in the last two years that he doubts the league takes a midseason break for the 2022 Winter Games, even with a more favorable host market for hockey growth in China than in South Korea in 2018.

“There is no news to report,” Bettman said in November after meetings with the IIHF. “I don’t want to sound like a broken record on the subject, but I think going to the Olympics is a challenge for us. I know the players love representing their countries. I know that the players like going. I know that the players that don’t go like having a break in the middle of the season. But from our standpoint, we have found going to the Olympics to be incredibly disruptive to our season.

“For us, at best, it’s a mixed bag. And, again, it has some pretty material downsides in terms of what happens to our season.”

In the women’s tournament, the U.S. and Canada drew the same group for a third straight Olympics. That was a formality, given the women’s group structure places the world’s top five nations in the same group. Beijing will be the first Olympics with 10 women’s teams, up from eight in 2018.

In the past, the top two teams from the top-ranked group advanced directly to the semifinals, and the bottom two into the playoff round.