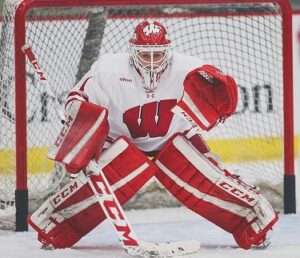 Alyson Baldwin is an ordinary American athlete. She gave many years to hockey, trained under the guidance of the Tretiak, almost got into the Russian Gararin Cup. Now she has moved away from hockey, went into power lifting and helps young North Americans in hockey. The history of the Russian American  Alison Baldwin – in our interview.

Tell me something about yourself?

I was born on June 5, 1997 in Dzerzhinsk (Nizhny Novgorod Region), but in December an American family adopted me and took me to the United States. The name at birth was Tatyana Kalashnikova. As I was told, my family already had a child and my parents could not provide one more, therefore it so happened that in December with the help of a woman from the USA who helps American families to adopt children from Russia I was adopted. My parents were grateful to this woman for help and I was named after her – Alison. That woman in the 90s helped many Americans. Another child was adopted with me. Now his name is Sean, and after some time his brother Trey  was adopted. Trey is the youngest in our family, my American parents do not have their children. As for my biological parents, I don’t know anything about them, I tried to find information about them on VKontakte, but nothing worked. My family said that they did not want to contact us.

You have a photograph on Instagram of the Russian “Stalin”. What kind of house is this and who made this photo?

This photo was taken by my American father in 1997. The photo shows an orphanage in Dzerzhinsk. Now he is gone. 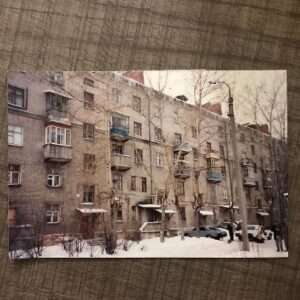 How did your Russian origin affect your life in America? Maybe there were some difficulties in adapting?

“Adaptation was not a problem for me.” I was very young when I was adopted and I did not get into Russian culture. However, I still have Russian citizenship. I learned about Russia when I was in Latvia in 2012 in a goaltender camp and I made friends with goalkeepers who then played in the MHL, and now in the KHL and VHL. I have many friends from Russia. As for the Russian language, I myself learned to read, although there is still a lot to learn and learn. 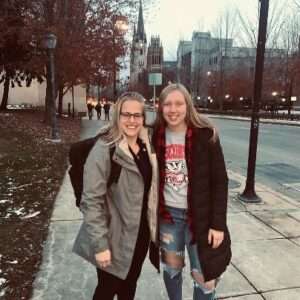 Alyson (left) with her former teammate

How did you get started in hockey?

I started playing hockey in Houston, Texas. I was still very young. My dad, who adopted me, brought from Moscow a jersey of the Dynamo Moscow hockey team with number 20. My father never played hockey, none of my American family was connected with hockey when I started. I thought it was an interesting sport. We had a skating rink near my house and I went skating for fun. Hockey seemed insanely cool in my mind, and I liked it when I was little.

Tell us more about your hockey career?

“It will be a long time, get ready”. When I started, in 2006-2008 I was a forward. Then I began to play the goalkeeper position, because at that moment the boys on my team were stronger and faster than me, they did not give me a pass, they threw themselves at me,  and to stay on the team I decided to change my position. I played for the youth team in Houston, Texas. When I got a little older in 2009 I went to the Alliance Bulldogs hockey team in Dallas, Texas. It was a low level team. Then we moved on to the Dallas Stars Elite league, AAA-league. I played in Dallas until 2012. In 2012, I went to Riga to goaltending camp with the Tretiak and members of the FHR. This gave me the opportunity to meet new people and friends in Latvia and the goalkeepers of Russia.

In 2013-2014, I studied at the Ontario Hockey Academy, developed very well as a hockey player. I had a game in Minnesota against the Russian women’s Olympic team before the Sochi Olympics. Our team won 8-0, but I did not play in this game unfortunately. In 2014-2016, I studied and played at Kent School, on an elite school. We won twice won the championship. In 2016, I went to St. Petersburg to see the local Dynamo club, but I could not go to Dynamo, I had obligations to the Wisconsin Badgers. In 2016-2018 I played in there in the NCAA League. We played twice in the NCAA National Tournament, 2017 – 2nd place; and 2 times became WCHA champions. 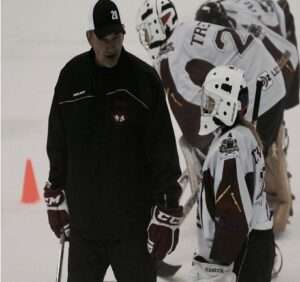 I was not given the opportunity to play a lot. I had negotiations with several D3, NCAA teams, but not with the leagues above. No team wanted to give me a chance. I was upset, in Moscow, Dynamo St. Petersburg wanted me to come, provided that I had good statistics, but my team did not give me the opportunity to play. I left my team in 2018, worked in ordinary jobs until 2019. Last year, I returned to the University of Wisconsin and began to study international relations. Now I am studying international political and military relations, especially Russian-American relations and US foreign policy. Now I am seriously engaged in power lifting. I like to train, to lift weights, it is popular in Russia, so I felt happy again. I was disappointed that I worked very hard in hockey, and the coach told me that I’m not good enough. In power lifting, I train for myself, I know when I work out well. I like my role in hockey now. I give advice and help parents about which youth teams are good, where there are good hockey teams in high schools in the USA and Canada. I work with many goaltending coaches in the USA (Goalies Inc.), I organize camps. My good friend from Quebec moved to the United States with his family and worked for the North Korean men’s and women’s teams. Unfortunately, I can’t continue to play, but I found an opportunity to help young hockey players through my experience and continue my university education.

Do you already have experience participating in competitions in your new sport?

I started training in August 2019, after some time I went to my first competition and got 3rd place. Squats 110 kg, bench 62.5 kg and traction 135 kg. This month I qualified for a power lifting tournament at the US National,  but the coronavirus canceled our competition. This has given its difficulties.

Tell me an interesting story.


What is funny or interesting is that most American hockey players and youth are inspired by the game of 1980 against the USSR (“Miracle on Ice” – a match at the Olympics-80 in Lake Placid between the strongest USSR team and the US team assembled from college students. USA won 4-3.)