Xtraice rink in the Azores.

Xtraice rink at Praia Vitória, on Island of Terceira

There are nine major Azorean islands and an islet cluster, in three main groups. These are Flores and Corvo, to the west; Graciosa, Terceira, São Jorge, Pico, and Faial in the centre; and São Miguel, Santa Maria,
and the Formigas Reef to the east and the Population of the islands are about 250,000.

In 2018 Xtraice opened it ts first ecological ice rink in the Azores (Portugal).

The 100m2 rink was purchased by a Portuguese company that is betting strong on Xtraice synthetic rinks.

Thanks to this initiative the Azorean people and tourists on the island enjoy a typical Christmas activity such as ice skating without being affected by the warm climate on the island.

The rink was installed at Praia Vitória, on Island Terceira. Praia Vitória is one of the most modern cities of The Azores, with a beautiful beach and high class port.

Also In 2019 Xtraice opened a 20x10m rectangular skating rink at Lagoa on the Island of São Miguel. The island is the crown jewel of the Azores not only is it the biggest island, but it the most beautiful island of them all. 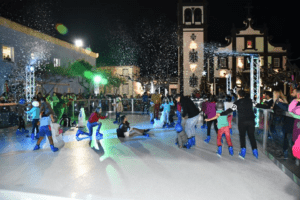 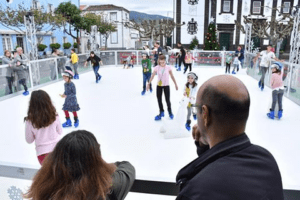 No Ice hockey was played but the Azorean people can dream of one day  ice hockey being played in the archipelago of the Azores.