Matt Dalton: “Naturalization is good, but it needs to be controlled” 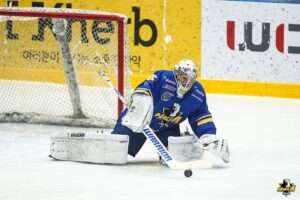 The best goalkeeper of the Division IA World Championships in Kazakhstan in 2019, the Korean hockey player who plays for Anyang Hall and the South Korean national team Matt Dalton gave an interview to NToIH and talked about himself and whether foreign hockey players should be invited to the national teams.

Why did you choose the position of goaltender?

I choose the position because when I was younger our goalie on our team got injured and he could not play anymore. So our team rotated goalies each game. When I got to play I actually did really well, and I really enjoyed it. So the next season I decided to switch full time. I also always loved the goaltender equipment.


What would you be if you hadn’t become a hockey player?

This is a very good question that I cannot answer immediately. When I was a child, I dreamed of becoming a hockey player. I thought it was possible and therefore did not even think about other options. I grew up in a farming family and, probably, if my hockey career had not worked out, I would now be working in a something related to farming.

Did you have the opportunity to stay in the USA and try to break into the NHL after the 2010/11 season? Why did you decide to leave for Europe?

Yes, at the end of the season I could have stay in America, but I received an offer to play in the KHL. I spoke with some players who already had experience this league and they told me that this is a good opportunity to play at a high level of hockey.

How were you invited to play in the KHL?

We had a skills coach in Providence that was from Russia when I was playing there. I got to be friends with him and we were always working after practice. I asked him one day if there was a chance I could go to Russia and play. He helped me and got me a chance to go and play there. 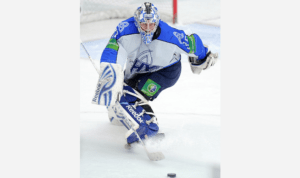 Which Russian cities do you remember most?

I would have to say the cities where I played – Nizhnekamsk and Podolsk. Among others I will single out Moscow, St. Petersburg, Yaroslavl, Novosibirsk and Kazan.

The most difficult opponent to play against in the KHL?

Perhaps this is SKA.

Tell me about the offer to play for Korea?

“I meet a Korean in London, Ontario.” His name is Steve Beak, he runs a skills hockey program called BK Hockey. In the off season, he and I skated together. Once Steve told me about the opportunity to play in South Korea, and the to get a Korean passport and play for the national team. This was a very hard decision to make but I called a few players that were already playing over there to talk about what hockey life was like and everything they said was positive so I thought I would try it.


Did you think that if you stayed in Canada you could now be the main goalkeeper of the national team?

Honestly, no. It so happened historically that we have a good history with goalkeepers. I really respect all the guys from Canada who are now playing in the NHL.

You have a child. Does he enjoy hockey and what do you see in his future?

Yes I have a 3 year old son. He is just starting to get interested in hockey and really enjoys watching me play and also watching hockey on TV. I hope that he will become a great right handed defence man hahahhaha.
But really I hope that he has passion and love for the game like I do and that he wants to play hockey as he grows up. I will really enjoy watching him follow his dreams. 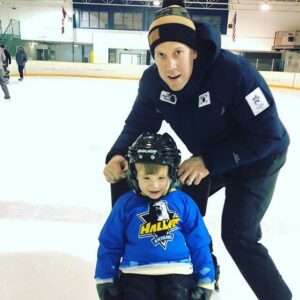 Matt Dalton with his son

Do you talk at home with your family about past games?

It happens sometimes. Usually, right after the game, I talk with my dad and my wife. I do not try to talk about it the next day. I used talk more about game but now i try not to focus to much on past games and just live in the moment as much as possible


In the Asian Hockey League next season a new team will appear. How will this affect the championship?

I think it’s great for the league. They are located in a good city and it will be easy to get to it. I hope that the team is competitive , but I believe that, like any other new club, it may take them several years for them to build there team up.


You have been to many cities and countries. What places do you remember most and why?

This is a difficult question, since I have been to so many beautiful places. One of my favorite cities is Prague. They are very friendly people and very good food. Prague is an historical city, so tourists will definitely be interested in visiting there. I have been there several times with my team and I have only positive impressions about this city. I would also mention Moscow, I just love the city, there is always something to do and thins to see.

Is there a country that you would like to visit in the future for the first time?

I have never been to the UK, but I think I will like it there. All my ancestors came from there and it would be great to go and look at this counties. There is so much history between all of them and it would be very interesting for me. I really enjoy history.


The Asian League season was interrupted in the final matches. How frustrating  was that?

Yes this is very frustrating that we had to cancel the rest of the finals. But I also understand why it was done. It makes me feel good that they were concerned about everyone’s health. But it is a pity that we could not finish.

In the summer they called me and asked what number I wanted. I said I want No. 30, but it was unavailable . Then I thought and decided that I could take No. 1. but it turned out that number was also unavailable. Then I wanted choose No. 86, because that was the year I was born in 1986, he turned out to be free and so happened that from that moment I play under this number.

“You always had helmets painted.” Which helmet design do you like most?

I think this is the helmet in which I play for the South Korean national team. It depicts Sun-Shin who is a hero in Korean for what he was able to do on the battle field. 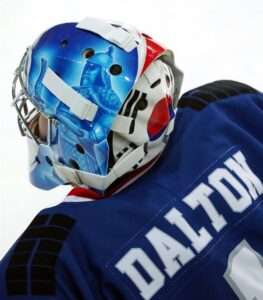 How do you feel about naturalization?

I think that it is great but it also has be controlled. I also feel that the naturalized players need to be playing for the right reason and have pride for the team that they are playing for. I think that it has really helped some countries for hockey and elevated there level of play. Which has given players more experience then they would of gotten. I think that it can help some players with someone to talk to about their experience in hockey. I think that most countries are very responsible when it comes to this situation so I feel like it is a positive for the game of hockey and it can help grow the game.

At the World Championships in Kazakhstan, you became the best goalkeeper. What does this title mean to you?

This is a great honour there was many great goalies at this tournament so to get this award was a great honour and I was happy to show that I can still play at a high level. 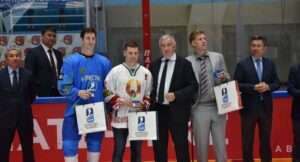 Yes I did, our hotel was great and also the facilities and the ice rink were first class. It was a great experience and our team had a good time. I had been to the city many years before and played in the old ice rink. It is a very beautiful city.


What is the difference between Asian, European and North American leagues?

This is a difficult question. I have been playing in Asia for a long time and it is difficult to compare their league with others. In the Asian Hockey League, players are very experienced and fast. Hockey players from other countries come to Asia every year, which makes local players develop and become better.

There are no forwards that I don’t like, but there are those whom I do not like to play, against as they are very strong on the ice and can embarrass you.


Where are you now and how do you spend your free time?

Now I am in the small Canadian town of Grand Bend. Here I spend time with the family during the off-season. I spend most of my free time working on our house and yard. I try to play golf and fish when the weather allows me to do so.


You have a lot of pictures from fishing. What was the biggest catch in your memory? 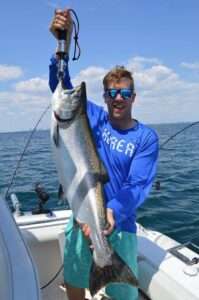 Matt Dalton Catch of the day