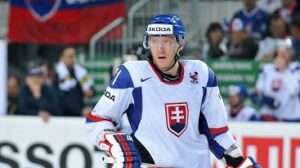 Marian Hossa is heading to the Hockey Hall of Fame.

In his first year of eligibility, Hossa was announced on Wednesday as one of six members from the Class of 2020, along with Jarome Iginla, Kevin Lowe, Kim St-Pierre, Doug Wilson and Ken Holland (builder). He needed more than 75 percent of the votes — at least 14 from the 18-member selection committee — to be elected.

“This is an amazing day for me and my family,” Hossa said in a conference call. “I would like to congratulate all the six people with me. It’s an amazing day for everybody. I’m really grateful for the opportunity to start playing in the 1997-98 National Hockey League and I never thought I would have an amazing career.

“My dream came true when I won the first Stanley Cup. This is definitely something special to be in the top, top players and the people in [the] National Hockey League. This means so much to me. I’m humbled and really grateful.”

Despite his career being cut prematurely because of a progressive skin disorder, Hossa finished as an eight-time 30-goal scorer and three-time 40-goal scorer and was widely regarded as one of the best two-way forwards in hockey. Chicago was fortunate to witness it first-hand for eight years.

“One of those players that really set the table of playing the right way,” Joel Quenneville told NBC Sports Chicago in January. “And as a coach, you couldn’t ask for a guy that demonstrates exactly what your message is on how we want to play structurally, in all zones, all situations. Protects the puck, keeps the puck, tough to take it away from him. It was like, ‘OK, this is the perfect player.'”

Not only is he a Hall of Fame player on the ice, but off the ice as well. Hossa is as universally respected within the hockey community as anyone, and the epitome of what it means to be a professional.

“You can’t replace Marian Hossa,” GM Stan Bowman said in October. “He was such an important part of our team. We never would’ve won any of our Stanley Cups without Marian’s contributions. He did all the things that you need a player to do to win. I’m not sure there was ever the full appreciation of what he did on a nightly basis to help our team win.”

There is now. Hossa is in the Hall and he couldn’t be more deserving of the honor.