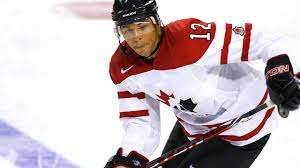 Iginla, who is widely regarded to be the greatest player to wear a Flames jersey, captained the team for nine of the 16 seasons he played in Calgary. He was honoured by the Flames last year when his number 12 was retired and raised to the rafters.

Iginla has been the recipient of many prominent NHL awards, including the Art Ross Trophy (most points), the Maurice “Rocket” Richard Award (most goals) and the Lester B. Pearson Award (most outstanding player).

He has also received multiple humanitarian awards for his leadership. In the 2000 season, he announced he would be donating $1,000 to KidSport for each goal scored, which he upped to $2,000 in 2005. Those donations resulted in more than $700,000 being given to the charity.

He also established Calgary’s Jarome Iginla Hockey School in 2002, which donated proceeds to the Diabetes Research Association. He is also a member of the NHL Diversity program, which helps disadvantaged youth play hockey.

Iginla is also a legend of the international game. He won gold for Canada on the world stage many times, most memorably assisting Sidney Crosby’s ‘Golden Goal’ in overtime against the United States in the 2010 Vancouver Olympics. Other gold medals include the 1996 World Juniors, the 1997 World Championship, the 2004 World Cup as well as another Olympic gold medal from the 2002 Olympics.

Iginla was drafted 11th overall by the Dallas Stars in the 1995 draft, but was immediately traded to the Flames. Iginla’s NHL debut came in the 1996 playoffs with the Flames where he recorded his first NHL point, assisting a goal from Theoren Fleury and scored his first goal in the following game. His career spanned over three decades, playing 1,554 games and racking up 1,300 points. He currently holds the record for most games played, goals scored and points as a Calgary Flame.

Iginla was traded to Pittsburgh in 2013 at the trade deadline for a first round pick and two prospects. He spent the next few seasons with Boston, Colorado and Los Angeles before announcing his retirement in 2018.

This is the first year that Alberta-born Iginla was eligible for the induction into the HHOF.