Egypt in the IIHF? It’s time for a pyramid scheme 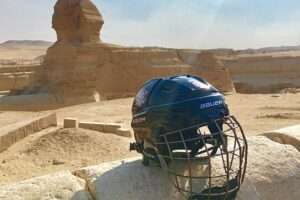 By Hussein Kamel – The Hockey News

Sameh Ramadan is a busy man. By day he lives in New Jersey, where he works in sales and marketing. By night the American-born Egyptian dual citizen is a senior advisor for Egypt’s club team and the point person in the country’s quest to join the International Ice Hockey Federation.

Ramadan, who joined Egypt Ice Hockey in 2016, is working tirelessly to establish a winter sports federation in Egypt in hopes of one day having the nation participate in international competitions. Ever the salesman, Ramadan has put his marketing chops to good use, rebranding Egypt Ice Hockey by revamping the team logo with a previously designed pharaoh wearing a goalie mask in the style of Jason Voorhees from Friday The 13th.

Ramadan – along with fellow committee members Yasser Ahmed, Ayman Abdallah, Ahmed Ramadan and Mahmoud Ghonaim – is also working to stage a game in front of the Pyramids of Giza to raise awareness about hockey in Egypt.

“Just imagine that vision in front of the pyramids, how crazy would that be?” he said. “If we are able to pull off a game at the pyramids, it would be an iconic scene – ice hockey in the desert in front of one of the ancient wonders of the world.”

The idea isn’t as pie in the sky as you might think. The plateau in front of the pyramids, which is used for concerts, graduations and other affairs, has hosted sporting events in the past, including the annual Egyptian Squash Open. Ramadan is working with charitable organizations Hockey4All and The Hockey Foundation on the logistics of staging the event. The hope is to build a real ice rink (rather than a synthetic one) in front of the pyramids and host a sports festival. 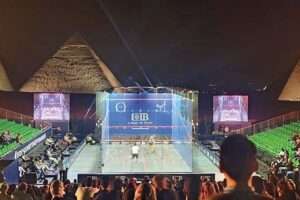 As head of Egypt Ice Hockey, as well as a left winger for the country’s team, Ramadan is always on the lookout for new talent across the globe. Whenever he crosses paths with anyone in the hockey community, he always makes a point of asking, “Do you know any good hockey players with Egyptian citizenship?”

And he’s not just looking for men. As a father of three young girls, all of whom play hockey in New Jersey, he’s hoping to establish a women’s team in Egypt as well. To that end, he’s identified eight to 10 dual-citizen girls under the age of 12 who are playing at the highest level of hockey in their respective countries.

In February, Egypt competed at the six-team Arab Professional Club Championship, with Lebanon, Bahrain, the United Arab Emirates, Saudi Arabia and host Kuwait. (Tunisia and Algeria were also invited, but neither could make it.) The tournament, which was the second edition, marked the opening of a new ice rink in Kuwait.

The club has come a long way since Ramadan’s first competition, the 2016 Africa Ice Hockey Clubs Cup in Morocco. Egypt showed up with nine players, two of whom were under 14, and only one goalie. The outcome was as expected, as the club team finished plum last.

“We now have a list of players,” Ramadan said. “We are rejecting a ton of people and asking for videos.” 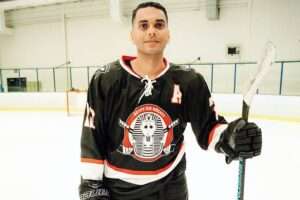 The players come primarily from New Jersey, Montreal and Cairo, and all of them pay their own way. To recruit new players, Egypt Ice Hockey relies heavily on word of mouth and social media. Members of the team play a pivotal role in the recruiting process by reaching out to clubs and coaches and asking whether any of their players are dual citizens. According to Ramadan, since the team began participating in tournaments, and especially after their overhauled logo went viral on Reddit, they’ve been getting more emails from players and coaches who are interested in joining the club.

At the Arab Clubs Tournament in 2018 in the UAE, Egypt managed to come away with its first competition win, beating Algeria’s club team 8-7 to finish fourth out of five teams. This February in Kuwait, Egypt will again participate as a club team, not a national team. Since the IIHF doesn’t sanction club competitions, the teams are allowed to bring non-nationals. Yet Egypt Ice Hockey has decided to limit the number of foreign players regardless, in order to give more chances to players with Egyptian nationalities. “We’re not so much bothered about our record as much as the year-to-year improvement and our growth,” Ramadan said. 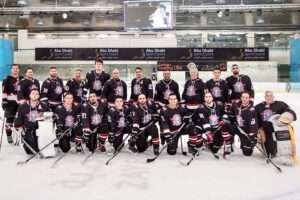 If Egypt’s program continues to grow, the hope is the country will eventually join the ranks of the IIHF. If so, Egypt would become only the fourth African nation to do so, joining Algeria, Morocco and South Africa. Last year, the IIHF welcomed Algeria, Colombia, Iran, Lebanon and Uzbekistan.
For most upstart non-hockey nations, the biggest hurdle is a lack of equipment. But thanks to donations from The Hockey Foundation and Hockey4All, Ramadan has all the equipment he needs.

To move forward, Egypt Ice Hockey is simply seeking a piece of paper from either the Egyptian Sports Minister or the Egyptian Olympic Committee.

“All I need is a letter, which is free,” Ramadan said. “The letter would say that Egypt Ice Hockey can continue to get an ice hockey education and bring that knowledge to Egypt – basically that the club can develop the hockey interest in Egypt. And with that we can apply to be an affiliate member to the IIHF.”

If Ramadan gets his wish, a new hockey nation will officially be born.

Hall of Fame waits for Lowe, Wilson come to an end 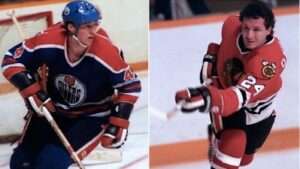 The waits for were long for both Kevin Lowe and Doug Wilson. But after receiving Wednesday phone calls from Lanny MacDonald, the two longtime NHL defensemen are Hall of Famers.

Lowe, eligible since 2001, and Wilson, eligible since 1996, were announced as part of the 2020 class along with Jarome Iginla, Marian Hossa, Kim St. Pierre, and Ken Holland.

“It’s not only that you have to get 14 of 18 votes, but it’s also sometimes who you may be up against when you’re up that year,” said MacDonald, the Hall’s Chairman. “Sometimes, it’s timing. Regardless of if they go in like Marian and Jarome, it’s richly deserved.”

When Lowe saw MacDonald was calling, he figured it wasn’t say he didn’t get in.

Lowe is the seventh player from those great 1980s Oilers teams to make it to the Hall of Fame. After watching Wayne Gretzky, Grant Fuhr, Jari Kurri, Glenn Anderson, Mark Messier, and Paul Coffey get inducted, he never thought he would join that group.

“I’ve never seen myself as a Hall of Famer,” Lowe said. “For me, the Hall of Fame was Bobby Orr, Jean Beliveau, Gordie Howe, Wayne Gretzky, Mark Messier. Although I know there are players of my ilk in the Hall of Fame and it’s a place for everyone, I don’t want to say I was disappointed in the years I didn’t get selected, but I certainly understood you have to put up more points, win awards.

“My dream was always to win Stanley Cups and the Hall of Fame was something I never dreamed about.”

Lowe finished his NHL career with six Stanley Cup rings between the Oilers and Rangers. In 1,254 games he scored 84 times and recorded 431 points. Internationally, he represented Canada at the 1982 World Championship and the 1984 Canada Cup.

Wilson had the longer wait and since retiring has made an impact as Sharks general manager for nearly two decades. He’s going into the Hall of Fame in the player category, a day he didn’t think was coming.

“It was an unexpected call,” he said.

Wilson played 16 NHL seasons, finishing with 237 goals and 827 points. He’s the Blackhawks all-time leader in goals and points by a defenseman and led the their blue liners in scoring for 10 seasons. His 0.81 points-per-game average is ninth all-time among defenseman who played at least 650 games.

Individually, Wilson was voted a 1981-82 First Team All-Star and won the Norris Trophy in 1982. He was also a finalist for the award four other times. Like Lowe, he was on Canada’s blue line for the 1984 Canada Cup.

“This game has been so good to me, and all the things I’ve been fortunate to do and the journey I’ve been on, it was very unexpected,” he said.

“It’s worth the wait. That’s an understatement.”