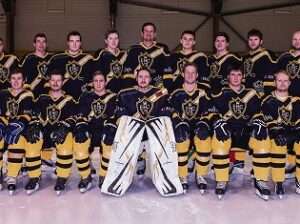 The association was founded in 1998 in Schellenberg

The sport of ice hockey receives little attention in Liechtenstein but has great interest in the small municipality of Schellenberg of all places. The EHC Vaduz-Schellenberg ice hockey team now wants to make ice hockey more popular across the country.

It is considered the fastest team sport in the world: ice hockey. While football dominates here, ice hockey is popular in the Nordic countries. In Canada, ice hockey is even considered a national sport. In Germany, Austria or Switzerland, the game on ice is still in second place. However, this does not apply to Liechtenstein.

Although the beginning of ice hockey in Liechtenstein is not in Schellenberg, ice hockey would not be what it is today without Schellenberg. The EHC Vaduz was founded in 1996 and took part in the championship for the first time the following year. In 1998, 12 young students from Schellenberg decided to also practice this sport. At that time I was a teacher in Schellenberg and played some ice hockey. A group of boys asked me if we could make an ice hockey team, ”says Christian Fuchs, President of the EHC Vaduz-Schellenberg, who was immediately enthusiastic about the idea of ​​his students. Shortly afterwards they founded HC Schellenberg in 1998. “We then practiced for a year and then formed a training community with Vaduz. In the winter you played on the ice and in summer inline hockey was on the training schedule. Three years later, they teamed up with the EHC and founded the hockey association. Since only the ice hockey department merged with Vaduz, HC Schellenberg remained the place for popular inline hockey.

We lack a sports facility for the game to gain popularity

The EHC Vaduz-Schellenberg currently has around 30 Players. For a comparison: there are around 1,700 active footballers in Liechtenstein. But why is there so little interest in ice hockey? “There is certainly interest in our country,” says Fuchs. “the Sport is popular here too and is followed. Ice hockey is very important to us in the region. Especially in Graubünden In eastern Switzerland and Feldkirch in Austria, but in the Sarganserland in Switzerland  and Rhine Valley, ice hockey is not unknown. Nevertheless, there are only a few Liechtensteiners who actively play ice hockey. For Christian Fuchs it is clear why this is so. «We lack a sports facility in the country where our sport could be practiced. In addition, the financial means are also limited.  Since there is no ice rink in Liechtenstein, the EHC moves abroad.

Despite these limited resources, the EHC Vaduz-Schellenberg is successful. In the last three years we won the championship title twice in the Vorarlberg Ice Hockey League 2. Two years ago it was “only” enough for the vice championship. Nevertheless, we are not superior or even want to play in a higher league. Our sporting goals are modest. It would not make much sense to play in a league higher as it is financially impossible and we can paly well and succeed  in this league. The successes of the past few years have also been somewhat happy for us, says Fuchs.

The connection to Schellenberg is currently somewhat lacking