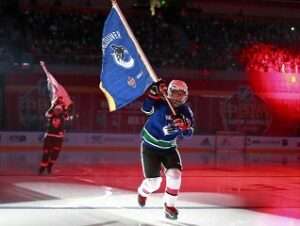 Kids carry team flags at a preseason game between Vancouver and L.A. in Beijing in 2017. Despite some flashy efforts by the NHL to drum up interest, there are only a few thousand players in the world’s most populous country

“The software, building a system, getting kids involved, getting them excited about the game, are the things that are missing. That’s sad for me because I love hockey in China. I really want to see it work.” — Former Montrealer Mark Simon, now living in China.

In September of 2017 the Vancouver Canucks and Los Angeles Kings staged a two-game exhibition series in China that signaled the NHL’s initial attempt to establish itself and hockey in the world’s largest market.

Since that first exposure, the game has experienced incremental growth in China but it’s also failed to attract a larger audience or create widespread participation. In 2022 the Winter Olympics will be staged in Beijing and the NHL’s hope is the best-on-best tournament will engage this country of 1.4 billion while awakening it to the world’s fastest team sport.

That, at least, is the hope. But according to one hockey man who has spent more than a decade trying to grow hockey in China, the NHL, IIHF, the IOC, the NHLPA and all the game’s stakeholders are playing a dangerous game with the Olympics.

“I cringe at a lineup with (Connor) McDavid, (Nathan) MacKinnon and (Sidney) Crosby against these guys (on the Chinese men’s team) I know and I like,” said Mark Simon, the 41-year-old Montrealer who moved to China in 2007. “It won’t be a good outcome. If that happens three or four times, the question will be asked, ‘Why are we doing this?’

“You want to build hockey in the country. But why do we want games that won’t be competitive? Now it’s on the biggest stage in the world and it’s not China against Canada. It’s China against anyone.”

Simon can speak with some authority on this subject. Since moving to China, he’s had a front-row seat to watch the game’s development, and while there has been some growth, it’s largely been sporadic.

For starters there are about 8,800 registered players in China, 7,300 of whom are youth players. The good news is with 213 indoor rinks, ice time isn’t exactly a problem. The challenge is attracting more kids to the game to fill that ice time.

To that end, Simon has helped organize youth tournaments in Beijing and Shanghai, worked with the NHL in introducing a ball-hockey program to elementary schools and coached any number of youth teams while consulting with Kunlun Red Star, the China-based franchise in the KHL.

In that time he’s learned the problem in China isn’t infrastructure or resources. The problem is utilizing those resources to build a hockey culture.

“The way I break it down is hardware and software,” Simon said. “It’s easy to build a rink. That’s a hardware piece and, in general, hardware is easier in China.

“The software, building a system, getting kids involved, getting them excited about the game, are the things that are missing. That’s sad for me because I love hockey in China. I really want to see it work.”

Five years ago, it was hoped that Red Star would be the energizing force in building the Chinese game but, like the sport itself, the team has experienced many ups and downs in its brief history. Again, money hasn’t been the problem. Owner Billy Ngok, an industrialist who ranked 99th in The Hockey News 2019 Top-100 people of power in hockey, invested heavily in Red Star and Vanke Rays, an entry in the Canadian Women’s Hockey League based in Shenzhen.

When the CWHL folded in 2019, the Rays moved to Russia’s WHL where they won the league title in May.

Red Star, meanwhile, has led a nomadic existence since joining the KHL in 2016-17. It’s played games in Shanghai and Beijing. It was set to move into a permanent home in Beijing — the Shougang Arena at the Olympic site — but the COVID-19 pandemic altered that plan.

The team will now play just outside of Moscow for the 2020-21 KHL season that is scheduled to start in September.

It goes without saying that start date isn’t exactly etched in stone.

“You move back and forth and it’s hard to develop a fan base,” Simon said. “It’s not just marketing a team, you’re marketing a sport and 99 per cent of the market doesn’t know much about that sport.”

Simon has worked with Red Star and their GM Scott MacPherson, the former NHL scout. The hope is the KHL team — coached by, ta da, former Canuck Curt Fraser — will help form the nucleus of the Chinese men’s team in 2022 but, with the Olympic tournament less than two years away, the makeup of that team has yet to be determined.

There are currently about 15 players of Chinese ancestry playing in the KHL or VHL, the second-tier league that operates out of Russia, China, Kazakhstan and Uzbekistan. Those players include Maple Ridge’s Brandon Yip, the former Colorado Avalanche forward; Spencer Foo, the former Calgary Flames farmhand; and Victor Bartley, the former Nashville Predators defenceman. All three played with Red Star last season and Yip was the team’s captain.

Beyond that is another level of players with minor pro, junior or college experience. According to IIHF regulations, the Chinese heritage players have to play 16 consecutive months for their new country to qualify for the Olympics.

They also have to qualify for Chinese passports, which can be an arduous process and, if they’re successful, here’s the payoff: They’ll be in a group with the U.S., Canada and Germany in the Olympics.

“I love the idea of the Olympics and I try to be as balanced as I can in my opinions,” Simon said. “I just don’t think it’s the right spot for that country. For the success of the sport in China, how good will it look if the home team is throttled?”

That, we assume, is a rhetorical question.