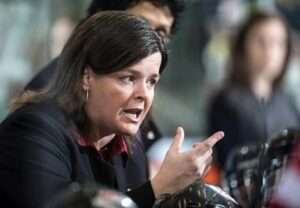 Lisa Haley has been named the head coach of Hungary’s women’s hockey team.

The Westville native takes over the reins of a team that will compete at the International Ice Hockey Federation world women’s hockey championship next year in Halifax and Truro.

“We were looking for a coach and reached Lisa Haley through the Canadian federation,” said Márton Vas, the general director of the Hungarian Hockey Association in a news release. “Her biography speaks for itself. We want to give the girls the best possible preparation before the world championship and the Olympic qualifiers. I am sure that she will be able to develop the players and prepare the team to the maximum.”

The 47-year-old Haley, who was an assistant coach of Canada’s gold-medal winning women’s team at the 2014 Sochi Olympics and silver medals at the 2008 and 2013 IIHF world championships, is excited about the challenge.

“I know the recent successes of Hungarian women’s hockey and the opportunity to add to it inspires me,” said Haley in the news release. “The results so far provide a strong foundation that can ensure long-term success, and even greater things can be built on that.

“Now that the national team has risen to the elite, we want to stay there too. Being Canadian, plus I’m from Nova Scotia, I will be especially proud to represent Hungary at the world championships in Halifax and Truro in the spring of 2021. We will be ready.”

Haley is in Hungary, leading the team’s training camp in Tüskesent.

Haley has also enjoyed international success with Canada, winning gold at the 2010 IIHF world women’s under-18 championship and also captured gold at the 2007 Four Nations Cup with the senior women’s team.

In 2011 and 2014, she served as a mentor coach at the IIHF women’s high-performance camp for the top under-18 players in the world.