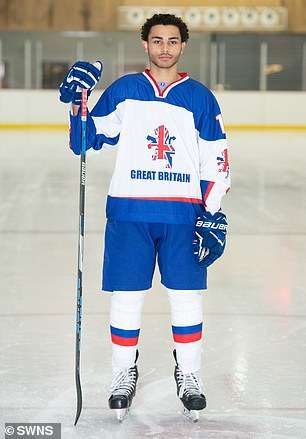 The door has been pushed ajar for young UK hockey players dreaming of playing in the NHL.

Liam Kirk was scouted in Sheffield, selected by the Arizona Coyotes 189th overall in the 2018 NHL draft and has impressed in the Ontario Hockey League since the Peterborough Petes opted to take a gamble on him in the import draft in that same year

That doesn’t mean life is ultimately easier for promising hockey players this side of the ocean. There are many different avenues and no path is without it’s pitfalls.

The London native played junior hockey in Chelmsford and Guildford before opting to take the step of playing overseas to continue his development – a route now trod by many starting in the UK.

The USA has been Alderson-Biddulph’s hockey home for the past two seasons.
A stop in North Andover, Massachusetts was first as the GB forward suited up for Islanders Hockey Club in the National Collegiate Development Conference (NCDC).
In his first taste of US hockey, Alderson-Biddulph recorded eight points in 31 games.

The 2019-20 campaign was spent in Maine as Alderson-Biddulph finished 4th in team scoring for Berwick Academy. At the USHS-Prep level, the only European on the roster registered thirty points in 23 outings of which twelve were goals.

It’s at the junior international level where the GB forward has been making waves and had many wondering if he could follow in the footsteps of Liam Kirk.

At the U20, D2A level, Alderson-Biddulph has accrued fourteen points (4-10-14) in ten games, helping GB win a Silver and a Bronze medal.

Previously, Alderson-Biddulph played at the lower age group with the U18’s and recorded duplicate statistics, although, of his fourteen points at that age-group, it’s impressive that nine were goals.
The young man also captained GB U18’s but unfortunately suffered racist abuse that many black people in sport sadly still have to endure.

The despicable event occurred during the 2019, Division 1 Group B World Championships hosted in Székesfehérvár, Hungary.

In the last two minutes of a game against Italy, Great Britain’s under-18 ice hockey captain said he was called a ‘n****r’ and added: “I was absolutely shell-shocked and completely disgusted.”
“He screamed it at the top of his lungs and I just couldn’t believe it. The fans heard it, everyone heard it.”

The player who shouted the abuse apologized to the GB Captain in person afterwards, along with the team captain, coach and the chairman of the IIHF, but this wasn’t enough for Alderson-Biddulph – “The damage has been done. He was man enough to step up and say sorry but what he said is disgusting.”

Nobody could ever be fully prepared for that kind of abuse while representing their country.
But with his father, Brian Biddulph, being the first black player to represent Great Britain at ice hockey, Mason was likely aware of the possibility of it occurring and the young man certainly handled himself with credit in the situation.

Brian Biddulph played professionally in the UK but also had a stint in North America, spending the 1986-87 season playing for the Langley Eagles in the British Columbia Hockey League.
No doubt providing some inspiration for his son to follow that path but also some much-needed advice at this crucial time.

As per a NY Times feature about Liam Kirk, Mason is quoted as saying the following during his time in Massachusetts:

“It’s fun being a big fish in a small pond [in England], but you really don’t know how good you are until you jump into the sea.”
“I just wanted to see how I’d fare against the kids that play every day in and out like the same way a British kid would play” soccer.

“The routes were to either go major junior or have four years of schooling that could possibly be paid for and then I could have a degree at the end of it, a sustained life and a good job.”

It was also noted in the said article that ‘an 11th grader at Triton Regional High School in Byfield, Mass., Alderson-Biddulph has had discussions with the likes of Colgate, Princeton and St. Lawrence.’

The chances of Mason Alderson-Biddulph being selected in the upcoming NHL Entry Draft are slim. He’s not featured in any of the major scouting lists and there has been no chatter around his name on social media.

That’s not to say he couldn’t be a late bloomer.
If he does indeed end up playing in the NCAA (which is highly scouted), then anything is possible as we have seen on many occasions.