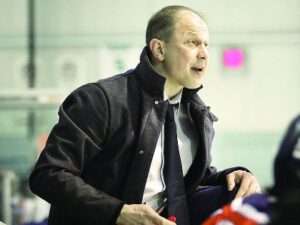 Sault Ste. Marie native John Parco is returning to Italy for a new gig with the Italian Hockey Federation

By Randy Russon – Sault This Week

A successful three season run at the helm of the Soo Thunderbirds of the Northern Ontario Jr. Hockey League has turned into a new challenge for high-end coach John Parco.

In his new role, Parco will be the director of hockey development for the Italian Federation.
Parco told Sault This Week that as director of hockey development for the IIHF, he will oversee all levels of the game from the under 20 national program down to four- and five-year-old kids.
He noted that part of his job relates to a pre-Olympic hockey project program.
“The 2026 Winter Olympics will be held in Milan, Italy and we want to make sure that we can put together a team that is at least competitive,” he explained.
“Overall, it is a big job with a lot of responsibility but I am up for the challenge,” relayed Parco, who is no stranger to Italy, having met his wife there and having played and coached overseas for more than two decades.

Parco, his wife, and their two kids have long maintained a residence in Italy, even while he was in the Sault and coaching the Thunderbirds.
On that note, as he prepares to head to Italy at the end of this month, Parco told Sault This Week he will retain a residence in Sault Ste. Marie, adding that he plans to return on occasion to remain involved in the Superior Sports Training gym that he owns.

Before going on to a decorated professional career as a player and coach overseas — mostly in Italy — Parco was a three-year scoring star as a center with the erstwhile Belleville Bulls of the Ontario Hockey League, playing for coaches Larry Mavety and Danny Flynn.

Drafted by Belleville out of the Sault Major Hockey Association in the third round of the 1988 OHL priority selections draft, Parco produced 109 goals, 148 assists, 257 points over three regular season campaigns with the Bulls.

A National Hockey League draft pick of the Philadelphia Flyers, Parco went on to a 19-year pro career, spending the majority of it as an A Division standout with HC Asiago in Italy.

As he was a team captain in the OHL with Belleville, he also wore the “C” on his jersey with HC Asiago. Parco also starred for Team Italy at the 2006 Winter Olympics in Turin.

After retiring as a player, Parco was the coach for HC Asiago for three seasons and led them to two championships. And having spent the past three seasons in his hometown as coach of the Thunderbirds, Parco led the local NOJHL team to three-year regular season record of 110-46-12.

He led the Thunderbirds to the NOJHL championship series in 2018-2019 before losing to the Hearst Lumberjacks in the seventh and deciding game of what was a thrilling, outstanding set.

Parco resigned his position with the Thunderbirds after the recent 2019-2020 season and has since been replaced by Denny Lambert as head coach.

Lambert, a former journeyman winger of many years in the NHL, also played for, and later coached, the Soo Greyhounds of the OHL.