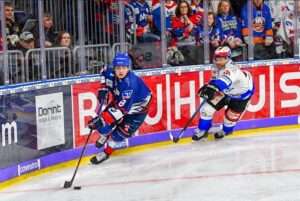 Tim Stuetzle, left, has been ranked as the top European skater by N.H.L. Central Scouting

With his strong skating and sharp stickhandling skills, Tim Stuetzle, an 18-year-old German forward, has drawn comparisons to Patrick Kane.

“Tim has this incredible imagination when he’s on the ice,” said Craig Button, the director of scouting for the Canadian sports network TSN. “Great creativity, and he combines it with this, kind of, boldness.

“He doesn’t just play with a great determination and great skill level, he plays with this panache. It says, ‘Stop me, I dare you.’ Not a lot of players have that.”

Stuetzle earned rookie of the year honors in the top German men’s league last season, playing on the top line for Adler Mannheim. One of his linemates and mentors was the former N.H.L. player Ben Smith, who won a Stanley Cup alongside Kane with the Chicago Blackhawks in 2013.

“So many guys from my team always said Patrick Kane to me, so that’s been a lot of fun for me,” Stuetzle said. “For me, it’s always tough to compare because I think others should make an opinion on that. But for sure, it’s a big honor for me.

“I still think I’m very far away from him and there’s a lot of things that I need to improve to get on his level. I still have a lot of time because I’m very young.”

Stuetzle has been ranked as the top European skater by N.H.L. Central Scouting. And he could surpass Leon Draisaitl, whom the Edmonton Oilers selected third over all in 2014, as the highest-drafted German-developed player in league history.

“I think it would be unreal for German hockey if you have that kind of first-rounder,” Stuetzle said. “But in the end, what’s most important for me is to play a long career and win something. I’m there to win and I hope to have a long career and a healthy career. That’s the most important for me, but, for sure, right now I’m hoping to get drafted as high as possible and, yeah, maybe higher, or the same, as Leon.”

Before Draisaitl’s selection, only two other German players had ever been drafted in the first round. Marco Sturm, now an assistant coach with the Los Angeles Kings, went 21st over all in 1996. Forward Marcel Goc was selected 20th in 2001. Dany Heatley, a forward selected second over all in 2000, was born in Germany but grew up in Canada and represented it in international competition. All told, only six German-born skaters and two goalies suited up in the N.H.L. last season. But those numbers are expected to grow quickly, with Stuetzle at the fore.

Alexis Lafreniere is the consensus top prospect for the 2020 N.H.L. draft, which is tentatively scheduled for Oct. 9 and 10. But Stuetzle has been placed second on a number of expert rankings, including Button’s.

“I really do believe that he is one of the very few players in his draft that’s capable of coming into the N.H.L., if there’s a 2020-21 season, coming in and being a contributor,” Button said. “Not a player that dons a uniform, but a contributor to the team that drafts him. I think he’s that good.”

Stuetzle should be an easy fit on most N.H.L. rosters, as he can play all three forward positions.

“I have no problem with each position, but I think I can be a very, very good centerman if I get stronger in a couple of years, because I love having the puck in the middle and making plays,” he said. “I plan, long term, on the center position. But last season went very good on the wing as well.” 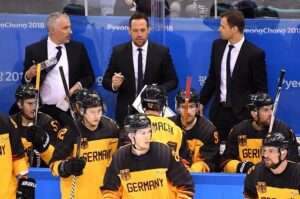 Marco Sturm, middle, was drafted in the first round in 1996 and coached his native Germany to a silver medal at the 2018 Olympics

Germany’s hockey program has been on the rise in recent years. Most notably: With no active N.H.L. players permitted to participate at the 2018 Winter Olympics in Pyeongchang, South Korea, Sturm coached the German team to an unexpected silver medal. And Draisaitl followed his first 50-goal season in 2018-19 by capturing the Art Ross Trophy as the N.H.L.’s leading points scorer in the pandemic-shortened 2019-20 regular season. With 110 points in 71 games, he finished 13 points ahead of his closest challenger, his teammate Connor McDavid.

In the last two years, two more Germans have been drafted in the first round. Forward Dominik Bokk was chosen 25th by the St. Louis Blues in 2018, and the Detroit Red Wings took defenseman Moritz Seider at No. 6 in 2019.

This year, more than one German could be selected in the first round for the first time. Wingers John-Jason Peterka and Lukas Reichel are ranked seventh and 11th on N.H.L. Central Scouting’s European skater list. Button ranks Reichel as the 33rd-best overall prospect and Peterka 42nd.

“J.J. is probably what I would call a little bit more of a two-way player,” Button said. “Coaches will be comfortable with him being out on the ice because he is so smart. And Lukas is, I think, a little bit more tilted toward being a playmaking-type forward rather than a goal-scoring winger, but it’s an area that he can develop.

“When you’re talking about potential first-round picks, I think Tim, obviously. But J.J. and Lukas certainly can be.”

Germany’s rise in hockey has come partly with the help of a program called Powerplay 26.

After a lifetime in hockey, including winning a bronze medal as a player at the 1976 Winter Olympics, Franz Reindl took over as the German Ice Hockey Federation’s president in 2014 and helped create the program. Powerplay 26 is a comprehensive plan for improvement at all levels, bringing more youth players to the game and supporting them more effectively, with a goal of consistently competing for medals at all levels by 2026.

Since Powerplay 26 began in 2014, the German senior men’s team has climbed from 13th to seventh in the world rankings. The under-20 team earned promotion to the top level in December 2018, and the under-18 squad followed suit four months later. Over the same time, the women’s program slipped slightly, from seventh to eighth.

“Our level is Switzerland, Slovakia,” Reindl said. “The big nations, they are ahead of us. Canada, Sweden, Russia, Finland, Czechs and U.S.A. are the top six. But to be seven — it’s amazing in these last years, going from 13 to seven in the international world. But now it’s even harder to stay there, and to maybe make the next step.”

Sustaining that success, said Stefan Schaidnagel, sporting director for the German federation, is a matter of consistently having positive results.