Q & A with Patryk Wysocki 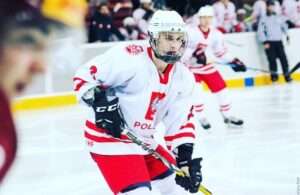 The only Polish player in the history of the MHL, 20-year-old defender Patrick Wysocski, who managed to play for clubs from four countries where hockey is not very popular, he spoke about himself, and also shared his opinion whether weak teams are needed in local leagues.

How did you start playing hockey and why did you choose this sport?

I started playing hockey when I was four years old. It all started with the fact that my older brother also played hockey, he is four years older than me. Why did you choose this particular sport? I was invited to train with my brother, I skated with them on the ice and, apparently, I liked it alot.


You were born in Belarus, but why did you decide to play for the Polish national team?

Yes, I was born in the town of Nesvizh. My dad is Belarusian, and my mom is from Poland. Almost immediately we moved to Poland and it so happened that because of this I only have a Polish passport.

Was there an opportunity to get into the national team of Belarus and did you ever want to play for them?

Of course, there was no such proposal from Belarus. I think if it were, then my parents and I would have thought about it, and perhaps I would try to play for Belarus.

In the Polish championship, two of the three clubs you played for were youth. ( Patrick Wysocski played for SMS Sosnowiec U20, GKS Katowice and PhZL Katowice U23 )

Yes, there is a PHZL Katowice U23 in the championship. It is considered the preparatory team for the World Junior Championships. All the guys who want to be in the national team can get there and play in the Polish championship. 1-2 days before the game they will be added to the roster and told to prepare for the game. If I am not mistaken, the team, after the World Junior Championships, which ends in December, no longer takes part in the league.


Is it good that there is such a team in the PHL?

Yes, I think it is needed. It’s funny that you play in your club at the youth level and you can be called up to the Under 23 team. This allows more games to be played per season, which allows for additional XP. If you are a young player, you can only get this opportunity in Poland.

According to the statistics of Eliteprospects, in the 15/16 season you played only in the national team. Is it really so?

No, a little different. Yes, I played in the national team, and at the club level I played for the Belarusian junior for HC Brest. 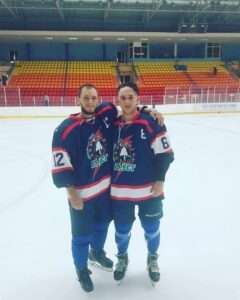 At the end of the 16/17 season you left Brest. What caused this?

I moved from Brest to Gdansk. First of all, conditions were better in Gdansk. When I was 16 years old, I did not look at salaries, but in Belarus they offered much less money. In Poland, the level was higher, and so my parents and I decided that we needed to move to Gdansk. And the coach at MH Automatyka Gdansk was Kovalev, who had experience of working in the Minsk Dynamo.

How did it happen that yourself, Kirill Gerasimenko and Dmitri Shcherbakov went out on the ice with basketballs?

There is a basketball team in Gdansk. We were asked to shoot a video, like an invitation to a basketball games. So we went out with the basketballs 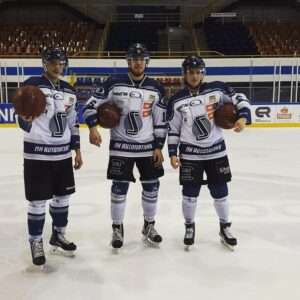 You played for the Polish national team for four seasons in a row.

I played two times at the junior and youth world championships.

Did you expect to be called up to the national team last season?

I did not receive a call to the main team. So far, no one has written to me and no one has called. It’s hard to say whether I was waiting or not. Somehow I didn’t think about it. If they ask me to go – I will go. I believe that I will get my chance, because I am only 20 years old. You can say that I am still young.

Next year, the 2021 World Championships in the IB division will be held in Katowice. Would you like to play there?

Yes, of course, I would like to play. This is only for the benefit of your career to say that you played with the national team of your country. It’s kind of a plus. It’s cool that we will play at home.

How do you assess the chances of the Polish national team to be promoted?

It seems to me that Poland can go to IA, because the IB division is not the level at which the national team of our country should be in. A year ago, there was a chance to rise higher, but one point was not enough.

For you, the past season was you did not score any goals. Will this affect your performance in the upcoming season?

In fact, it’s a shame that this season I failed to score. I think that every coach sees the game differently and every player has his own role on the team. There are defenders who do not know how to attack, but defend well, and there are defenders who play poorly in defense, but look good in attack. I will try to score more.

You’ve already had something similar. For the first time in a long time, then you distinguished yourself in the Kunlun Red Star Heilongjiang. This was your first goal in the MHL. Do you remember how you got to throw?

Yes, I remember that match. We played against Kapitan Stupino. We were losing
0: 5. I shot the puck from the blue line and it somehow flew into the goal. And in general, that game ended 5: 7. 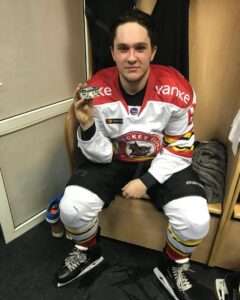 Patryk Wysocski with puck of first goal in MHL

Do you still have that puck?

Yes, I took it. It lies at my house and reminds me of the MHL.

What Medals have you won?

I have two silver medals from the World Youth Championship and a gold one from the junior one. I think these are the most valuable of the medals.


How did you manage to win the junior world championship?

We scored more than the opponents (lol). We meshed into one whole team. The most important thing is that everyone supported each other and played better with each other, therefore we won gold medal. 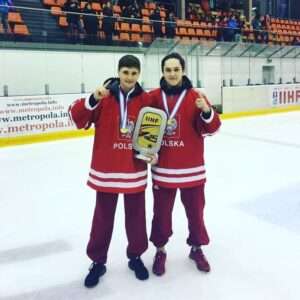 On February 9, the Polish national team beat Kazakhstan in the pre qualification for the Olympic Games. Did you watch that match and were you surprised by the result?

Yes, I watched the match when the Poles played against the Kazakhs. It’s cool that Poland managed to win. I was a little shocked that Kazakhstan lost with such a squad, especially at home, Hockey is such a game that it is not clear who will win and when.

Two new teams will play in the PHL next season. Do you think it is right that lower division clubs get their chance in the PHL?

Yes, two clubs got a chance to play in PHL, and one team was eliminated – MH Automatyka Gdansk . I played there. They have minor financial and ice-rink problems. Let the league expand. Why not? Let there be more teams, more guys playing. Then the level of Polish hockey will rise. As for me, this is good.

What experience did the Continental Cup give you?

I didn’t play much in the Continental Cup. There was a story there. At Katowice we had a Canadian coach. He preferred to play with five or six defenders, and there were nine of us then. This led to the fact that many players did not play. Anyway, I managed to watch the international tournament. Going at the age of 19, or even just attend such a tournament, to play a couple of shifts is an experience.

With what expectations did you go to Belgium and how professional is everything there in terms of hockey?

When I terminated the contract with ORG Junior Beijing , I came home to Brest to see my parents. I got an agent and we were waiting for offers. It is clear that in the middle of the season it is difficult to get somewhere, because the rosters of the clubs have been formed. For me, the season was not the best, as I was injured with a tear in the ligaments on my knee. In December, an offer came from Antwerp Phantoms. I understood where I was going, that this BeNe is not the best league in the world. I didn’t want to lose the rest of the season and during the time in Belgium I could improve my weaknesses. If we compare Belgian hockey with Polish, then Polish, of course, is a higher level. In BeNe, not all players approach the game professionally. There are professional and semi-professional teams. I expected a little different, but what worked, it worked.

Here and there my teams were in the last places. When you get into such clubs, you are more on the defensive. As a defender, it even works in my favor. Although you still need to learn to play attack.

ORG Junior Beijing this season beat Moscow Dynamo. Did you communicate with any of your former teammates after that match?

We still correspond with some of them. Then I called the boys and asked how they managed to win. In that game, they only had ten players. They said that they were surprised at their victory. In the course of the season, they did manage to win a lot of games, but here they beat Dynamo with ten men.

ORG Junior Beijing played all home matches in Dmitrov. Do you think this is unfair enough?

Why is it unfair? I think it was the right decision. We were supposed to be based in Riga, but the Chinese hockey players were not given visas and because of this we were told that we would live somewhere in the Moscow region. I think that it even played a positive role, since there were no long flights. All the essentials were in Dmitrov. The town is small, ice-covered and there is a hotel.

A year and a half ago, you got a unique opportunity in a game against MHC Spartak. Your playing time has almost reached 30 minutes. Do you remember that game?

I have more hockey memories with Kunlun than with ORG Junior Beijing. That season it was the other way around, I came to Kunlun in the second part of the season. I have not spent less than 20 minutes on the ice. Sometimes we played four defenders. So in this regard, I was definitely satisfied. Yes, we lost, but everyone got a lot of playing time.

What are your plans for the next season?

I will definitely will not return to Belgium. Now I am not considering the option of continuing my career there, and so far there have been no proposals from their side. In general, there are no plans yet. Due to the coronavirus, almost no one knows anything. Clubs from some countries are already making transfers, starting to conduct trainings, and in many of them nothing has even budged yet. Therefore, I cannot say anything about this yet.