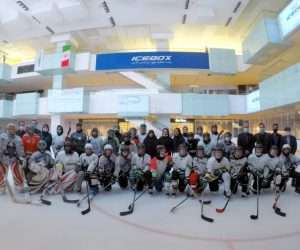 According to the Ice Skating Federation of Iran, the Iran’s women’s ice hockey team started the camp for the IIHF Challenge Cup of Asia.

The event will be held in Manilla, Philippines in May 2021.

According to the public relations of the Iran Skating Federation said that  ice hockey women athletes have passed the first stage of their selection camp to participate at IIHF Challenge Cup of Asia in Manilla.


Forty athletes from the provinces of Tehran, Tehran County, Eslamshahr County , Qods County, Ray County and Pakdasht County  attended and the techniques, tactics and skills of skating were held The athletes were evaluated under the supervision of the technical staff of the national ice hockey team, and the names of those invited to the next stage will be announced through the official website of the Skating Federation.

The first stage of the selection camp for men’s ice hockey players to participate in the IIHF Challenge Cup of Asia., which will be held in Singapore in May 2021, will be held on Wednesday, September 26, 2020