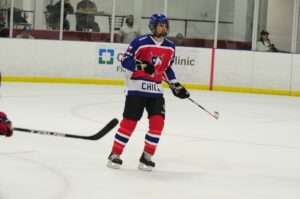 Vladimir Kurian – about his career, about life, about Chile at IIHF

Why did you choose hockey?

It was an easy choice for me, I still remember that moment. When I was 9, I watched the 1994 Winter Olympics in Lillehammer on TV. At the time, I knew nothing about hockey, as I spent most of my time taking piano lessons. My mother also played the piano, and I really enjoyed playing. But that day changed everything. For the first time I saw a game that I fell in love with instantly, with such players as Palffy, Stastny, Satan became a kind of example for me. That day we beat Canada 3: 1 and then I said to my father “I want to become a hockey player!” Everything turned out to be go great – we lived in Banska Bystrica, very close to the ice arena, and a school with a sports bias, and I was taken to hockey.

What made you move to Chile?

After a difficult period in my life in Slovakia, I wanted to start life from scratch. My parents died of cancer – my father died when I was 25, and my mother 5 years later. They were literally dying in front of my eyes, it was the most difficult period in my life and it was not easy to cope with it. At that moment I realized that I had to leave Slovakia for a while. The choice was between Canada and Chile, in Canada I lived for some time, and therefore I knew the language and I had several acquaintances there. But in Chile I had a friend whom we met in the USA, when I worked there in the “Work and travel” program. Subsequently, we traveled a lot around the America and once he came to me in Slovakia. In the end, I flew to Chile, I wanted to stay there for 3 months as a tourist. But during this time I fell in love with this country, people were friendly to me, and I felt that I can start my new life here. It took me some time to learn Spanish. Now in Chile I am an independent person, I have my own business, I discover new things for myself in this country, and I help to develop hockey in Chile.

How did you get into Chilean hockey?

I have always loved hockey, but I had no idea that there is hockey in Chile. But when I found out about this, I looked on the Internet for something about hockey in the country, and found the club “Santiago Yeti”. I contacted the club, I was immediately answered and invited to the team. At that time, I was without equipment, so I had to borrow skates and a couple of golf clubs. The team believed that since I was from Slovakia, I was playing professionally, so I spent more and more time on the ice, and then I was offered to become a become a player coach. 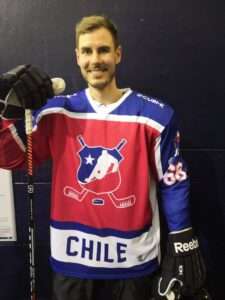 Vladimir Kurian in his Chilian Jersey

Do you play for any club now?

No, at one time I played for my city in the junior league, there was no chance of a professional career, since this is more of a hobby than a job with which I would like to connect my life. But hockey is still important for me.

Did the Chilean national team fulfill their tasks at the Latam Cup?

Latam Cup became a huge experience for us, we were able to assess our level, the level of other teams, players, and realized that we had a huge work ahead of us to improve the quality and level of play. If we return to your question, then yes, we are satisfied with the performance of our team, and this is an invaluable experience gained at the Latam Cup.

Latam Cup is a hockey tournament among the countries of Latin America and the Caribbean, held annually in Florida (ed.), And the Chile national team in the last tournament took 6th place out of 7.

After the Latam Cup, Colombia joined the IIHF, what are the plans for the future of hockey in Chile?

Yes, becoming a part of IIHF is a great honor both for Colombia and for Latin America in general. Congratulations to them, they deserve it, it shows that the level of hockey in Latin America is growing. But Chile is still far from the IIHF. Chile is a beginner in hockey, we don’t even have the right training for our athletes, but we are trying to move on. Our main goal is to create a development program and involve children in hockey. It is also necessary to create a federation in order to get the attention of the government and get some support, but this is not an easy task. In the meantime, you need to do basic things, spend more time on the ice, find financial support for the purchase of hockey equipment, support the school.

What do you do in your free time from hockey?

I work as a DJ and a music producer, I started my own business importing vegan products from Slovakia to Chile, so there is very little time left for hockey.

Do you play your music in the dressing room?

Not really, I leave the choice to my partners. Electronic music is not as popular in Latin America as in Europe.

How many people attend your concerts?

At the moment I’m more of a music producer than a DJ. Because of the business, there is practically no time left to work as a DJ. Therefore, I enjoy music as a producer.

What Track do you Recommend?


I would recommend “The Awakening”, this track I composed in Chile, it describes my big change in life.