Q & A with Dan Locmelis 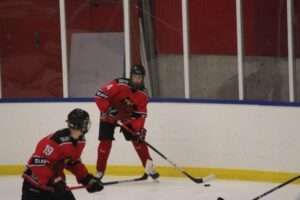 At the age of 15, Dans Lochmelis moved from Latvia to Sweden, where he now plays for the Luleå club system and already in the first season abroad, the 16-year-old forward managed to become the best sniper in the Sweden U16 Elite league.

How did you start playing hockey?

My father used to play hockey, and when I was two years old, he took me with him and I would skate on the ice skated. Once my dad and I went to eat at a cafe after his training, then the guys would trained on ice and I told my father that I also want to play hockey. This is how my hockey career began.

Why did you choose the forward position?

I don’t know why I chose the forward position, but I can say that I have not even tried to play other positions.

How did it happen that you moved to Sweden so early?

An agent called me and offered for me to try my hand in Sweden, where everything is high level and where the club pays for everything. I think that very few people would refuse this offer, so I went to Sweden.


Did you know Sandis Vilmanis before coming to Sweden?

Yes, I knew Sandis before going to Sweden, as we often played against each other. In the end, it turned out that the agent offered both of us to go to the same country and now we have become teammates.

What were your initial expectations from the first season in Sweden?

I really didn’t expect much. I just wanted to train and play at a high level.

Were you surprised that you managed to be one of best players and finish in the TOP-3 among scoring leaders?


Yes, I was surprised. I didn’t think that my debut season abroad would turn out this good.

Is it an achievement for you that you have already become captain of the national team for your age group?

I do not consider this an achievement, but being the captain is a great honor for me. 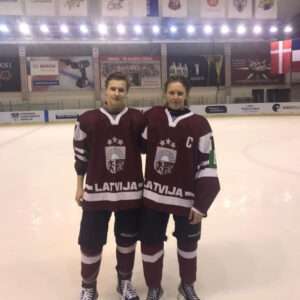 Rainers and Dans with Team Latvia U16

What is the difference between a captain and a regular player?

There is no big difference, but the captain, unlike an ordinary player, should be an example for the whole team.

Who do you consider the best Latvian hockey players?

Not to say that I have idols, but if I were to pick TOP 5 of the best Latvian players, it would look like this: Rudolf Balcers, Kaspars Daugavins,Theodor Blueger, Lauris Darzins and Miks Indrasis.

Was it a shame that in the end you did not manage to overtake your friend in points scored?

No, there was no such feeling. Hockey is a team sport. Basically I played with Sandis on the same line, so we helped each other score points.

You have already have been playing for Lulea U18 team this year. was it hard so abruptly to switch from one age category to another?

It was a little difficult. Faster hockey in U18, you have to make faster decisions, and this made the game more difficult and more interesting.

Are you ready to play fully in the U18 league?

Luleå plays in SHL. How soon do you think you and Sandis will debut in the top league?

I think Sandis and I can make our SHL debut, but definitely not this season.Of course, every hockey player would like to debut in adult hockey as fast as possible.

Yes, and now I continue to follow the news about Riga Dynamo.

Next year, some of the games of the World ice hockey Championship should be held in Riga. Is this an important event for Latvia?

I think yes. This will be a great opportunity to see the NHL players and other top leagues. Latvia has the best fans, I think they can help national team in the fight for the title.

Did you manage to learn the language during your time in Sweden?

Now I know a little Swedish. I think that this was the hard part learning a new language for me when moving from Latvia to Sweden.

What was your most memorable moment in the 2019/20 season?

It was the moment when we reached the quarter finals. It’s a pity that due to COVID-19 we were unable continue the season. We had a good chance of winning it all.


What are your goals for the next season?