Maxim Viktorov: “In Croatia in the 90s I received more money” 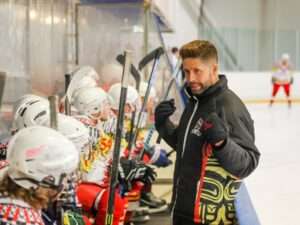 The head coach of the Night Hockey League club “Yadreny Vozhd” Maxim Viktorov in an exclusive interview with our website spoke about life in Croatia and local hockey in the 90s.

I left in the mid-90s for Croatia to play for Medvescak by invitation. I left, it seems, in the 96-97 season after the games for SAK Moscow.


I played three seasons at Medvescak, and in the second to the third season I was allowed to play for the national team.

The move to Croatia was due to the invitation of the “Sab-Spartak Moscow-2” coach Yuri Nikolaevich Novikov, a well-known coach both in Russia and in the world. Before joining SAK, I played on that team. At that time, he was invited to work as a head coach at Medvescak and he invited me as one of the leading players of the team. Actually, I agreed. Then in Russia everything was not so simple with hockey and with life. I approximately remember the low level of salaries then, and traveling abroad was generally considered a miracle. Therefore, it was interesting to go and try to play there. Arriving there, I met other hockey players from Russia whom I did not know. They were mostly veterans, but there were also younger hockey players. As for the Croatian national team, it seems that only Gennadi Gorbachev was there before me. If so, then it turns out that I am the second Russian in the history to play for the Croatian national team.

Gennadi Gorbachev took part in the world championships for the Croatian national team in 1994, 1995 and 1996. Gorbachev was the top scorer of the tournament in 1996.


I spent three years in Croatia, played at the World Championships and left for Russia, but I didn’t gain a foothold anywhere. I had to pause a little. Then I began to play for the Sokol Novocheboksarsk.  I went to my last world championships. In the same season and then returned to Medvescak for half a season, and did not go to play for the national team four a fourth World Championships. The injuries began, so I decided to end my career. Recently I have been receiving invitations to work as a trainer in Croatia, but now I have other tasks related to the project in Moscow. 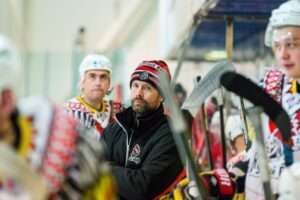 What is Croatian ice hockey in the 90s?

Croatian ice hockey has not changed in the 90s, 2000s and 2020. I regularly follow hockey in the country, I know the situation from the inside, because I have good relations with the sports director of one of the clubs and with the president of another club team, and I regularly visit this country myself.

In the 90s there were four clubs in which both Russians and Slovaks played and a few Czechs. Then there were some restrictions on the number of foreign players on the teams. I, Gorbachev and a Slovak were on Medvescak. Naturally, there were also local players. The best Croatian hockey players were gathered in “Medvescak”, since the club has its own winning history, every season there was a task to win. It is important to understand that there it is amateur hockey by our standards. I knew that if I wanted to continue to play at a good level, I had to constantly train. So I did it on my own time, kept myself in shape. We played in international league, there it was a joint league with Slovenia and Hungarian clubs. There were many tournaments, as Hungary and Slovenia are nearby. International championships were normal. Sport in Croatia is generally very developed,

At that time the salaries were higher than in Russia, comfortable living, wonderful climate, kind people. In general, I found only positive impressions of Croatia.


I quickly joined the team, the team accepted me, and I began to show good results. I was offered to stay for the next season, and Yuri Nikolaevich at that time had already left for Soviet Wings. He called me to his place an ask me to play at the, Mayor’s Cup, but it didn’t work out for me and I came back to Medvescak. They were waiting for me there, everyone was happy with everything, we won, we were champions, I was the best player. and after the second season, I was told: to stay with the club for another season, They give me citizenship and was told me” I would play for the national team.” I agreed. I also had a offer from Slovenia, where Sergei Stolbun played in Jesenica. He invited me there, but I refused, as everything suited me at Medvescak, and the agreement was in terms of playing for the Croatian national team, so I stayed. And I got citizenship, got the right to play for the national team and went to the World Championships.

The games for the national team practically did not differ from the games for the club, because both in the club and on the national team, all the hope was on me, because I was a foreign, So I had to carry the whole team. Of course, my teammates helped me, because we were already had played together, so it was easier for me. At theskill  level that we had, we had enough strength to beat serious opponents. But without my 100% dedication and extra efforts it would be hard to achieve something. We did not have a goal to win the tournament, we had goals either not to be demoted to the lower division or to take a medal from the championships. I played in three tournaments – Group C in the Netherlands in 1999, Group C in China in 2000, we got promoted and finished 3rd place in 2001 we played at IB in Slovenia. I still have a medal for the 3rd place finish.

I had good relationships with both players and people from the people who ran the hockey club, and not only. I have been friends with Marin Miljak for many years, we met him when he was still a Zagreb player. We often see each other and I communicate with his parents, with his family. Marin is a wonderful person with a lot of experience. He now works at Zagreb as a coach and sports director. Last season, under his leadership, the club for the first time in many years, it seems, in 36 years, became the champions of Croatia and broke the dominance of Medvescak.

Now professional “Medvescak” does not exist, only a school and a youth team are working. In other clubs the situation is no better. In principle, it is not clear how the future seasons of both the local and foreign championships will develop, not only because of financial problems, but also because of the coronavirus.

And at the moment I work as a coach in the Moscow club of the Night Hockey League “Yadreny Vozhd”, and since this season I am also a regional representative of the NHL in Moscow.