Edmonton to host 2021 world junior hockey championship with no fans 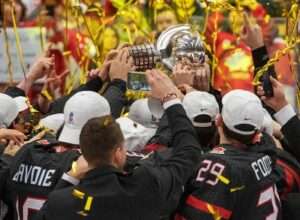 Edmonton will host another major hockey event with no fans after the International Ice Hockey Federation confirmed Rogers Place will be the site of the 2021 world junior championship on Thursday.

The IIHF Council approved the Hockey Canada plan, which sees one of two planned cities for the 2021 event maintain hosting duties during the COVID-19 pandemic.

Organizers now say the event will return to those two cities — with the hope of having fans — in 2022.

No tournament dates have been confirmed for the revamped 2021 event.

Rogers Place currently is hosting the final two rounds of the NHL’s Stanley Cup playoffs. Edmonton and Toronto served as co-hosts for the entire NHL post-season.

“This is a tough decision to have to take, but ultimately we did not have a choice,” IIHF president Rene Fasel said in a statement.

“The health and safety of players, officials, and fans is our top priority. We were impressed with the presentation from the local organizing committee outlining how a potential bubble scenario would operate within Edmonton, and we are confident that we can follow the NHL’s great example in creating a safe environment for teams to compete.”

Hockey Canada approved of the decision to keep the event in Alberta for two years.

“These are extraordinary times, and we understand the world juniors will look different this year while being played in one venue with additional safety precautions,” Hockey Canada president Tom Renney said in a statement.

Novosibirsk, Russia, will host the 2023 event.

The IIHF says keeping the event in Canada, where the tournament traditionally has much higher attendance, in 2022 can help cover financial losses expected to occur in 2021.

“This solution will allow for the IIHF together with Hockey Canada to reduce the overall costs associated with putting on the 2021 tournament in a bubble environment,” Fasel said.

“We asked a lot of our Swedish partners to make this adjustment in a short amount of time, but we needed their co-operation to save this tournament and make it possible for the world juniors to be delivered this year.”

Organizers of the 2021 event say a competition bubble will isolate teams and tournament officials within the same Edmonton Ice District being used for the NHL.

The IIHF says there will be no promotion or relegation following the 2021 tournament.

The IIHF Council has voted today to initiate a series of tournament cancellations for all lower division tournaments in the men’s U20 category. The 2021 IIHF Ice Hockey U18 Women’s World Championship will also be cancelled together with all other tournaments in the women’s U18 category.

Canada won the 2020 event in the Czech Republic.