Q & A with Shaylene Swanepoel 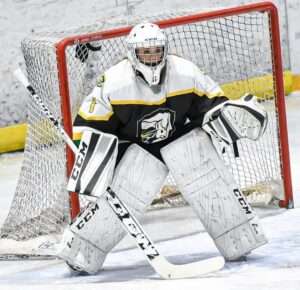 We had the great pleasure of speaking with Shaylene Swanepoel a 10 year veteran of the South African Women’s National Team and also a awesome chiropractic.

How did you get started in ice hockey?

Ice hockey isn’t exactly considered a common sport to be played in South Africa. We used to go to the public sessions and skate for hours at a time. From there we met the “better skaters” that actually introduced my sister and I to ice hockey. This was something different and fun to try do… I mean, my sister and I weren’t allowed to Rollerblade, however we managed to twist my parents arm into trying to play ice hockey.

Why did you become a goaltender?

For about 3 years I played defence. My ex-boyfriend used to play in goal… So I thought why not give it a go?

It turned out I wasn’t that bad – had a decent blocker and a not too bad butterfly for a first timer. I kept on playing in goal because I loved the challenge, I do find that goalkeepers at times get over looked and maybe not enough credit for some of their efforts. It’s a huge mental game, not only physical. The training is also unique which makes you a huge part of the team. Makes me feel great that I can contribute in some way to my team.

Some may say I just don’t like to get off the ice haha, as being part of the reason. But it really is a position where not only do you get to appreciate the game by watching, but also by being involved and part of the action. 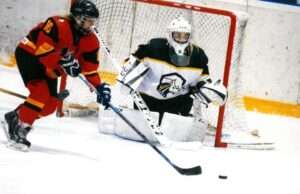 Shaylene Swanepoel concentrates on #10 of Belgium in front of her goal.

South African Ice Hockey has been a member of the International Ice Hockey Federation (IIHF) since 1937. Due to sanctions we were not allowed to participate in IIHF world championships until 1994. The first Woman’s team to represent South Africa in an international event was 1999. It was difficult years to try and qualify for World championships, in those day’s. It was difficult for woman players as there was no woman’s league and female players played and competed with their male counter parts.

Since those early day’s a lot has changed. Woman’s ice hockey development increased tremendously since then. Our numbers steadily increased to more then 175 female players in the country from all ages, races and religions.

There isn’t much information on the web about domestic women league in South Africa, can you tell us about it?

All provinces now has development woman players, playing half/cross ice games, in the smaller provinces these woman teams will play against junior boys teams except for Gauteng Ice Hockey Association where they have 4 development ladies teams since 2015 which compete in their own league against each other with the youngest player as young as 7 years old since most ladies still play in teams with their male counterparts. Gauteng ice hockey created an all woman’s team the Black Panthers in 2013, this team compromised off all their elite woman players (most of which were national team players) competing in the U18 boys league. In 2017 Gauteng Ice Hockey created a Junior Panthers team for younger female players showing potential, they competed in the U16 boys league. It became evident that woman change their game when they play against woman then when they play against men therefore, Gauteng created a senior woman’s league in 2019, they created 2 equal strength teams to compete against each other, it is important for the younger players to play and learn from the older players, as a result the Junior Panthers program has been discontinued.

How has the coronavirus pandemic effect ice hockey in the county?

The Corona Virus pandemic impacted the sport tremendously. All ice hockey activities was suspended since the lock down started, as a result our U18 Men’s and Senior Men’s tours for the IIHF world championships has been cancelled. We also withdrew our U20 team which were supposed to participate in their tournament during January 2021 in Mexico City. On ice practices are only starting now, there is a lot of hard work ahead of us to be able to participate in the rest of the Championship schedule, in February, March and April 2021.These are all dependent on pandemic control. During the lock down, SAIHF in partnership with Star Zone sport in Sweden, presented a winner heads program to keep players off ice skills and fitness up. For our National program the SAIHF director of coaching, Andre Marais, worked with APA training systems for a more intense off ice fitness program.

You have represented your country in 10 IIHF world championships, what is your most memorable tournament?

I would have to say our most recent one in Bulgaria December 2019 (2020 IIHF Women’s World Championship Division III). After playing numerous tours, winning gold definitely takes the cake. 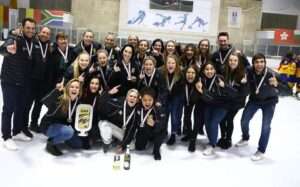 Did you ever have any offers or want to leave South Africa to play hockey at a higher level?

Unfortunately no offers, it would have been great though. I would have loved to have tried to get to play anywhere in the world. A lot of the time, funding is a huge part of why some of us can’t get to other parts of the world for exposure.

But if I could even get a chance to be one of the treating Chiropractors for one of the teams, that would also be amazing. 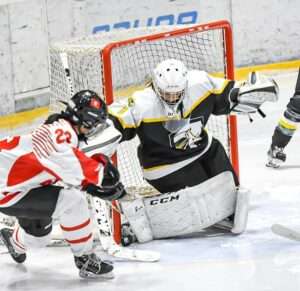 You now have other African countries playing the game like Kenya, Algeria and Morocco. Do you think the game can grow on the African continent?

Definitely YES! It would be fantastic! It may be challenging considering our climate on this side of the world. Funding and investments is also some of the hurdles we all may face. However why not start somewhere? It just may take a bit of time.

You are now a chiropractic. Why did you pick this line of work?

On my first hockey tour….we had a Chiropractor on as our team Medical Doctor. I didn’t know what Chiropractors were until I had seen what she had done for our team. This got me into researching and observing what Chiropractors do for not only athletes, but also for babies, adults, geriatrics, as well as pre and post surgery patients. It showed me how we as a profession can make a difference in someone’s life, and I fell in love with the profession and never looked back.

Outside of hockey and your professional career, what are your goals?

That’s a very good question…. It’s a tricky one to answer. My goal is to live a long and happy life with the ones I love around me. 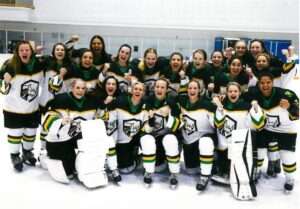