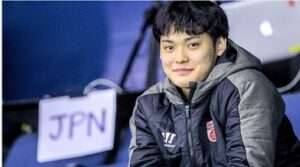 Having already suited up for teams on three different continents, it´s all part of the masterplan for 18-year-old prospect Yu Sato to one day enter Japanese ice hockey folklore.

“I want to become the first Japanese outfield player in the NHL. It is a dream I’ve had since I started to play hockey at the age of three,” said the Saitama-born forward, whose rookie season with the Quebec Remparts in the Quebec Major Junior Hockey League (QMJHL) came to an abrupt end following the COVID-19 lockdown.

Having previously played junior hockey in Russia and Finland, Sato’s credentials were put to a severe test in Canada’s Eastern province of Quebec during the 2019/2020 season. Skating against mostly older opponents such as top NHL entry draft pick Alexis Lafreniere became a notch up in quality for the Japanese prospect. After overcoming an early season injury, relentless competition for places saw playing time eventually become limited as he finished the season on four goals and six assists in 39 games for the Remparts.

“Each country I’ve played in has a different style of hockey which helps develop me as a player. In Quebec it was a physical game against older players where you had to make fast decisions playing on a smaller sheet,” said Sato, whose style of play makes him a rare commodity in Japanese hockey.

“The typical player in Japan is playing along the wings and always thinking to pass, pass and pass. Sato is very different. He always wants to shoot and his mind is always on scoring,” said Japan’s head coach Yuji Iwamoto of a player he hopes can lead the way for the men’s program to earn a place at the 2026 Winter Olympics. 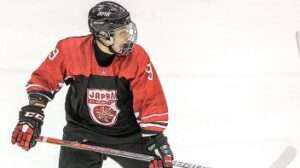 While NHL and the Olympics might still be a distant dream for Sato, another life-long ambition was fulfilled at the start of this year. Making his debut for Japan, Sato was in imperious form as Nippon raced to gold at the 2020 IIHF Ice Hockey U20 World Championship Division II Group A in Vilnius, Lithuania.

“It was my dream to represent my country and it was an amazing experience. I always wanted to play for Japan. I hope to get to the top division someday and I want to help Japan reach that level,” he said.

At the age of 11, Sato’s ambitions had already outgrown his native Japan. With Alexander Ovechkin being Sato’s hero as a kid, where better to speed up the development than in “Ovi’s” native Russia? The junior set-up of Krylia Sovetov in the Moscow region became Sato’s first port of call on his hockey odyssey.

“In Japan we had no junior league and only played tournaments. In Russia I was able to fully focus on hockey and there were lots of games. At first, it was hard. The culture was different and so was the style of hockey. I didn’t know Russian or English back then, so I was working from hand gestures on how to do things,” said Sato.

His parents took turns to stay with their son during a five-year Russian stint. There the Japanese teenager picked up the Russian language while relentlessly honing skills out on the ice that set him apart from his contemporaries.

“I mainly improved my physicality and skating in Russia. I was faster than the Russian players, so I came to use that to my advantage,” said Sato. 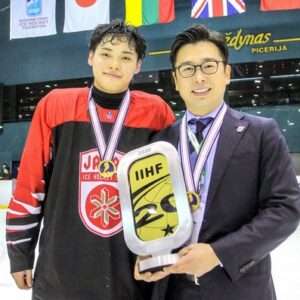 Topping the scoring charts for Krylia, he soon caught the eye of one of Russia’s all-time greats, Igor Larionov. The Triple Gold Member took Sato under his wings. When import restrictions closed the door for Sato to progress into Krylia’s MHL team, Larionov found him a new challenge in Finland.

“I first tried to go to the Lahti Pelicans, but there they said I wasn’t going to get much game time, so I went to Kiekko-Vantaa instead. It was a good experience. The hockey was different from Russia as it was much faster,” Sato said of the 2018/19 season where he notched 80 points (37+43) in 37 games for various Kiekko-Vantaa junior teams.

Ahead of this season, it was once again Larionov, who had rolled up his sleeves to find Sato a spot on the Quebec Remparts roster. Playing in a home arena in Quebec City with 18,000 seats and facing top talent took him momentarily one step closer towards the NHL dream only one Japanese-born and trained player has fulfilled so far.

In 2007, netminder Yutaka Fukufuji clocked up 97 minutes for the Los Angeles Kings. The closest a Japanese skater has come to the NHL is Yushiroh Hirano, who last season notched an assist in his sole appearance for the Wilkes-Barre/Scranton Penguins in the AHL. Hirano was back skating in his second spell in the ECHL last season together with another Japanese forward, Yuri Terao.

Sato is realistic about his prospects on what is still a long road ahead. Having returned to Japan during the COVID-19 pandemic, he now ponders the next destination on a hockey odyssey where he one day hopes to be locking horns with Lafreniere once again.

“As it is right now I can say that it’s not possible to be drafted, but I will continue to work hard every day to reach my dream,” Sato said.