Q & A with Javokhir Rasulov 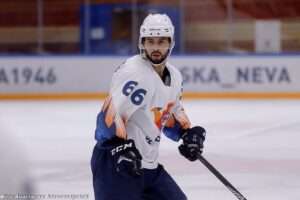 Javokhir Rasulov allocated time for us and talked about himself, about the tasks for the season and about Uzbek hockey

Javokhir, hello. Tell us about your career, how did you come to hockey?

Hello. Yes, my career roughly speaking is just beginning.
(Javokhir is 20 years old, he was born on February 6, 1999)

I started in Samara in the courtyard, I was 10-11 years old, and at the age of 12 I went to play professionally for CSK VVS children’s school, now it is called “Kometa”. and so it slowly went from there.


How was the transition to Humo?

I was happy that a team was created in my hometown. A gift of fate, It’s a great opportunity to become a good player, because I haven’t played for the last 2 years.

In your opinion, what should “Humo” count on this season, what is the task for the season?

The task is to get into the playoffs, the further the better. We have a good team, two experienced and two young teams, many have played in the KHL and MHL.
There are even hockey players with experience of playing overseas (defender Igor Merezhko and foward Vasily Aniskin played in the Canadian junior leagues,)

You are still the only hockey player in Humo  from Uzbekistan, tell me, are you planning to strengthen the team with more local players in the future?

There is another guy in the second team, he started to play in Tashkent, but I think that within 5-7 years there will be more composition by local players. There are children born in 2007-2009, a couple of good guys, they play in the championship of Kazakhstan. 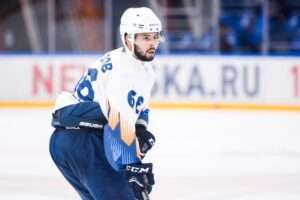 “But the future of Uzbek hockey should be promising, because the entry of the clubs of the“ Humo ”system in various professional championships gave a good boost for future development.

I also think so, it’s very good that we have created two teams and the children will come to us and understand what real hockey is. People will bring their children and this will give a good reason for the children to think about starting to play hockey. Soon they want to create a national team. In general, we will develop.

Please share your impressions of the first game between Humo and Ryazan.

The first period did not go as we wanted, since we had not played for a long time. In the second period, we came out fast and scored alot of goals and followed the coach’s instructions. (“Humo” won with a score of 5: 0,)

Thank you very much to the fans for coming to support us. There were even more people for the game with Barça. I think that over time there will be full stands, but so far many do not know that such a game exists in Tashkent. Also tickets to the games are expensive and many may not want to spend their money.

Uzbekistan cannot be called a country remote from hockey. Many fans are familiar with the Binokor club, which played in the USSR championship. Quite a long time has passed since then. Since then have many people forgotten about hockey?

Well, don’t tell. You know, I once met people, even rode in a taxi once, asked “What are you doing?”, and when I talk about hockey, they immediately started to remember about Binokor club. People of a certain age of course remember about the club.

Can you tell us why Humo started to play in the VHL championship?

Well, it’s not for nothing that we got such a great arena (LOL)