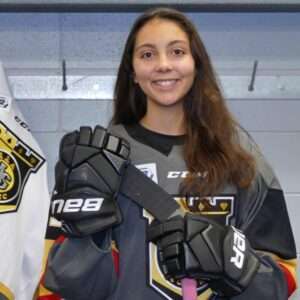 Tunisia, to put it mildly, does not often give birth to hockey players, but now the North African country can be proud of a historic event – the first women hockey player with Tunisian roots playing in Canada.

Her name is Sirin Kasem and her parents are from Tunisia. She has been playing hockey since she was 7 years old, and since season 18/19 Sirin has been playing for the Quebec A’s from the Quebec Triple-A League. At the end of the 19/20 season, Sirin scored 13 goals in 22 games and took 12th place in the league’s top scorers list, and the team won the main trophy – The Cup of Canada.

Everything is just beginning for me. The Cup of Canada is not the limit. I am grateful to my parents for everything they have done. They were always present at my games, they cheer me up after a bad games and taught me a lot, for example, to be persistent and strong. They have always supported me, and in the end it helped a lot, ”said Kassem.

Immediately after the end of the season, Sirin was invited to the QCHL (Quebec College Hockey League) team “Les Titans du Cégep Limoilou”. The head coach of the Titans, Pascal Dufresne, said that the attacking qualities of there new hockey player are excellent.

But Sirin’s dream has nothing to do with hockey. She wants to become a surgeon and is making every effort to make her dream come true.