Canadians at disadvantage for World Junior Championship in Edmonton 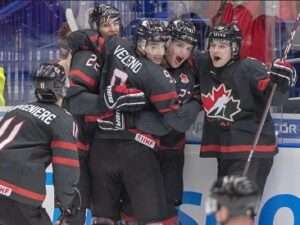 The Canadian world junior team will have home-ice advantage, if you can call it that in an empty Rogers Place over Christmas, but that playing field is levelled because much of the hockey world is already playing games during the COVID-19 pandemic except for most of North America.

Normally Hockey Canada has a good feel for their roster ahead of the selection camp in December because they’ve had a summer evaluation session for 40 or so kids, then they watch them for two months in their leagues and see who’s hot and who’s not. Not now for the defending champions.

At least the USA youngsters had an evaluation camp earlier this month, but many of their best kids are in college and nobody’s sure when they’ll start playing.

The Quebec Major Junior Hockey League started Oct. 2, even in these COVID times but had to suspend play for two weeks until Oct. 28 because of an outbreak with some of their Quebec-based teams with only five clubs in the Maritimes playing. But they hope to be back up and running soon.

Not so with the OHL and the WHL. The Ontario teams hope to start Dec. 1 but that is a very short runway for kids playing some games before the selection. And the OHL start then might be optimistic.

It’s even worse in the Dub. No games until Jan. 8, after the tournament ends.

“All the European kids are playing and for Canada and USA Hockey this is a real challenge picking their players … and it’s not just about getting them ready to play in the tournament, it’s evaluating the right players,” said TSN’s Craig Button.

“The scouting and evaluation process for Hockey Canada is pretty in depth, and they’ve been watching kids in the U17, U18, Hlinka-Gretzky tournaments before but there’s no chance now (COVID) to see a kid not on their radar playing well and they get an invite (selection camp). There was no Russia-Canada cross-country tournament this year to get a read on players.

“Plus, there weren’t any NHL prospect tournaments like Traverse City to watch people. That’s how (Portland Winterhawks) Joel Hofer (last year’s Canadian goalie starter, a St. Louis fourth-rounder) got noticed. Dale Hunter (head coach) saw him and said, ‘wait a minute, we need to be watching him more.’ So without games and the Russia-Canada series, there’s no opportunity for a Joel Hofer.”

Hockey Canada will have some returnees from last year’s team they already have a book on — Quinton Byfield, Drysdale, Dawson Mercer — but they will have to wait to see if the NHL teams release the highest-end kids Kirby Dach (Chicago), Dylan Cozens (Buffalo) Alexis Lafreniere (Rangers), Bowen Byram (Colorado). Most of the 2020 draft pick possibles for the team won’t be playing games.

“Ontario might well be in the same boat as the Western League (starting in January) and the Ontario League has three teams in the United States in Erie (Pa.), Saginaw and Flint in Michigan. Maybe the those U.S. teams just play each other but Jamie Drysdale (Anaheim’s first-round pick) plays for Erie. But he lives in Toronto. Is he crossing the border and travelling back and forth to the Michigan teams (only). Cole Perfetti (Winnipeg’s first rounder) plays for Saginaw. These are two prominent players for Team Canada.”

These kids can stay in shape with practices but picking this year’s team will be like throwing a dart against the board. Meanwhile, Swedish kids like Oilers 2019 first-rounder Philip Broberg is playing in their best men’s league, along with 2020 top 10 picks Lucas Raymond and Alexander Holtz. Russian goalie Yaroslav Askarov, who went 11th to Nashville and is playing for CSKA in the KHL, will be the starter.

Vancouver’s top pick in 2019 Vasily Podkolzin, who starred in the Hlinka-Gretzky Cup here in 2018, is also in the KHL as is Leafs 2020 first pick Rodion Amiron He’s playing for CSKA in the KHL.

“What Hockey Canada needs to do is go deep into their data base if they wanted a smaller camp (December) … now somebody had another suggestion for me. How about Hockey Canada deciding to go into the bubble in Edmonton in late November and they have a 10-day, 50-player camp, say, starting on Nov. 25? Then they pare it down to 28 players and they work with that, already in the bubble. That could be an option for Hockey Canada.”

Hockey Canada will be talking to people from the Canadian Hockey League Friday and they’ll announce the camp start in Edmonton, hopefully next week.