Compulsory victory for the German A selection after ice hockey return 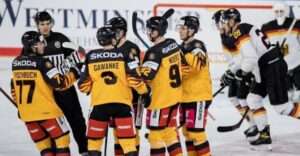 After eight months of stagnation and almost a year without an international game, the national players have given ice hockey a step back in Germany.

At the start of the most unusual German Cup in its 33-year history due to the crown, the A-side of the German Ice Hockey Federation (DEB) beat the Olympic prospect team effortlessly 7: 2 (4: 1, 1: 0, 2: 1) without national coach Toni Söderholm.

Söderholm, infected with the corona virus, was only able to follow his national team’s first game 361 days after the last German Cup 2019 international match against Slovakia via video stream. Its representatives – U18 national coach Steffen Ziesche and Bremerhaven coach DEL Thomas Popiesch – saw a level that could be improved at the start of the tournament. Most players were only able to resume training on the ice recently. “At the beginning, we didn’t have a structure in it. There is certainly still room for improvement, ”admitted double scorer Marcel Brandt of the Straubing Tigers.

After the German ice hockey league season ended in March due to the corona crisis, there was no professional gaming operation in Germany. International matches and the World Cup in May have been canceled. Unlike other sports leagues in Germany or other European ice hockey leagues, the DEL has so far not been able to resume playing without hearing income. “We want to use games wisely to bring the sport to life. We want to continue our daily life afterwards, ”Noebels said before the start.

DEB had also gone to great lengths to revamp their traditional home tournament, which has actually been played with four nations for several years. After some refusals from other teams, only three teams from two nations are participating this year. The third team is Latvia, which will meet the German talents on November 6 (5 p.m. / MagentaSport) and the German team A on November 7 (4:45 p.m. / Sport1 and MagentaSport).

Even games without spectators are a novelty for the DEB which, according to its own press release, lacks 300,000 euros at the box office. However, by hosting the tournament, the association deliberately wanted to set an example in the decisive weeks to come. This weekend, DEL2 and the top third-class leagues also begin their gaming operations. In the coming week, eight of the 14 DEL clubs will be launching a specially created preparatory tournament. The elite league wants to decide on November 19 if they can still start with a season in mid-December. 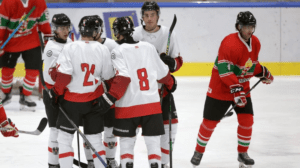 The Austrian players celebrate a goal in the first exhibition game against Hungary.

The November international break saw few events going on such as the Karjala Tournament and the Deutschland Cup in men’s senior hockey.

However, many tournaments in several categories had to be cancelled due to the COVID-19 pandemic and the measures against it. And some that were planned got cancelled in the last minute such as U20 and U18 games between the Finnish and Swedish national teams due to players tested positive on the Swedish side.

The only international U20 games were played in St. Polten between host Austria and Hungary. Belarus and Denmark abstained from travelling to the event and Latvia, also planned for the tournament, cancelled its flight booking after positive tests.

The Austrians, who were promoted to play in the 2021 IIHF World Junior Championship in Edmonton, succeeded with two wins against their neighbours – 4-2 and 6-3.

Recent first-round draft pick Marco Rossi scored a goal, Senna Peeters and the team’s youngest player Marco Kasper led the Austrians with two markers. 16-year-old Kasper is the son of former Olympian Peter Kasper and moved to Rogle Angelholm in Sweden ahead of this season where fellow U20 national team players Peeters and Thimo Nickl are among his teammates.

“The association did a good job and our safety concept worked well,” said head coach Marco Pewal about the event. “In a few weeks we will enter a bubble to prepare for the World Juniors. This will be a completely new experience for everybody. I hope all players stay healthy so that we can participate at the World Junior Championship with our strongest team.”

The team will enter the bubble at home on 6 December in St. Polten and fly to Edmonton one week later. There the Austrians are seeded in a group with Russia, Sweden, the United States and the Czech Republic.

The only other U20 national team that had games this week was Poland, which ended up playing against club teams Polonia Bytom and Zaglebie Sosnowiec.