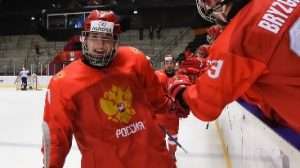 International hockey made a long-awaited return – albeit with some adjustments imposed by the coronavirus situation. In Finland, the Euro Hockey Tour got underway in front of limited crowds and players put in a bubble. Elsewhere, Germany staged its first top-level hockey event since the start of the pandemic as the Deutschland Cup took place, although only three teams took part in Krefeld.

This is a big year for Rodion Amirov. The 19-year-old Salavat Yulayev Ufa forward has been tracked as one to watch for a couple of seasons and now he is starting to deliver on that promise. Elevated to a big role in the KHL as illness affected Ufa’s big names, he’s beginning to produce the points his potential demands. Then came a #15 NHL draft pick, linking him to the Leafs, and now a senior international debut.

And not just any debut. Russia decided to use the Karjala Tournament – traditionally a full-blooded men’s tournament – as a testing ground for its U20 roster. The Red Machine’s usual preparations for the World Juniors have been hampered by the pandemic, while national team head coach Valeri Bragin only recently recovered from a case of coronavirus. Thus, the Russian boys – Amirov & Co, under U20 head coach Igor Larionov – would face the men of Europe’s top hockey powers.

It was a controversial decision in Russia, and even more so beyond the country’s Western borders as the other teams didn’t hide their disappointment. But from the moment Amirov put his team 1-0 up in the second minute of the opening game against Finland, it was fully vindicated. Amirov scored in each of his first three international games – the first player ever to do so for Russia – and the team won three out of three to top the group. Only Sweden came close to stopping Larionov’s youngsters, losing out in a shootout after Amirov – who else? – potted a late goal in a 1-1 tie.

In his brief career to date, Amirov has sometimes been criticised as a luxury item. In Helsinki, though, there was no questioning his output or his attitude. His observations about the tournament suggested a big ‘buy in’ to the team amid the clamour about his personal performance.

“The most important thing was that we won the tournament,” he said. “Playing against men was an interesting experience, that’s really valuable as part of our preparation for the World Juniors. I’d like to thank Igor Nikolayevich [Larionov], who found the right words for the team. We always got switched on for the next game right away and we came here to win, not just to take part. The Russian national team’s task is always to win, so we did everything to achieve this with a competitive team. Luckily, everything worked out and we won the tournament.”

Larionov himself said that he was happy for Amirov and fellow forward and first-round draft pick Yegor Chinakhov, who finished with two goals in the tournament. But he also talked up the contribution of SKA St. Petersburg goalie Yaroslav Askarov, who returned to action in the opening 6-2 win over Finland and delivered three wins.

“We discussed it with Yaroslav [Askarov], we wanted to be sure that he felt he could play all three games. He made it clear that he wanted to play, he put in good performances, so we let him get on with it,” Larionov said. “We were all happy that he played so well, he was reliable every time.”

There was also praise for captain Vasili Podkolzin (SKA), but Larionov is looking forward to seeing how his young charges develop over the course of another month of KHL action.

“Winning any game helps us to progress and helps the guys to develop, especially here,” he added. “But there are loads of things that we saw where we can improve. This is just one step towards bringing the team together. Now our players are going back to their clubs, back to their routines, battling for a place on their teams. In another month, they will have that bit of extra experience. We’re looking forward to getting everyone together in Novogorsk at the end of November and work on our game together.”

Russia secured top spot with a 3-0 victory over the Czech Republic on Sunday. Previously the Czechs, coached by Filip Pesan following the death of Milos Riha in the summer, had beaten both Sweden and Finland. However, they could not complete a sweep against Russia and had to settle for silver.

Pesan, who gave 12 players an international debut in the three games, was happy with what he saw over the weekend. Sunday’s game featured three teenagers, including 19-year-old goalie Lukas Parik, as the Czechs looked to build for their future. “I’m happy that we were able to help the U20s prepare for the World Championship,” Pesan told Hokej.cz. “A lot of the players here made a strong application to be invited back for other tournaments.”

The Czechs had their preparations disrupted by local restrictions that prevented teams from training in indoor arenas. Some of the teams practised outdoor or went abroad. “Right now, it just sounds like an excuse, but our boys were not game ready,” Pesan added. “I’m not interested in opinions, I just wanted to help the juniors and the youngsters played a great game.”

The good news that the Extraliga would be allowed to resume the competition just came when the team departed for Helsinki. The league had its first round on Saturday with no spectators allowed and mandatory testing before the games.

While the Slavic nations battled for top spot, their Nordic rivals had a tougher time of it. Finland and Sweden both selected entirely home-based rosters for the tournament. The two went head-to-head in Sunday’s concluding game with the loser destined to finish last. Sweden jumped to a 2-0 lead at the start of the second period, but the host nation steadily battled back and won on a power play goal from Valtteri Kemilainen with three minutes to play.

For 2016 World Junior champion Vili Saarijarvi, who got the tying goal midway through the third, it was important to finish the tournament strongly – and scoring his first senior international goal was a bonus.

“It wasn’t exactly a dream goal, but I’ll take it!” he said after the game. “We ended with a good feeling and I think we played our best game at the end, which was important. We did well to get back into it and get ahead at the end, and I think we deserved our win today.”

Top-level hockey returned to Germany for the first time since the pandemic as the Deutschland Cup saw the host nation play a three-way contest against Latvia and a Germany ‘B’ roster. That B team was comprised of under-25 players who are playing their way into contention for a call-up to the 2022 Olympics in Beijing. Due to the pandemic Norway, Slovakia and Switzerland have not been able to travel to Krefeld forcing the organizer to change the setup.

The games at Krefeld’s Yayla Arena represented a return to action for some of the country’s top players. The DEL, Germany’s top league, has postponed the start of the season and will soon discuss about the possibility of launching it in December. Following the weekend’s action, some of the clubs will play in a pre-season tournament.

Despite hopes for a smooth return to action, preparations for this tournament hit turbulence. Germany’s head coach, Toni Soderholm, tested positive for COVID-19 prior to his planned departure for the games. He remained in quarantine, communicating with his colleagues online, while Steffen Ziesche, U18 head coach, took charge of the team.

Latvia faced similar challenges, with Bob Hartley remaining in Russia where he is head coach of Avangard Omsk. Artis Arbols stepped up to replace him. With Dinamo Riga using the international pause to catch up on KHL games missed during its own quarantine, Latvia’s roster was a mix of home-based players, rising stars and, in the form of Martins Karsums and Andris Dzerins, a couple of veterans currently without a club.

The tournament format saw a round robin with the two top teams advancing to Sunday’s final. Germany B found life tough, losing 7-2 to Germany and 5-2 to Latvia. On Saturday, in a dress rehearsal for the medal game, the Germans defeated Latvia 2-0 and looked set to win it all.

However, the Latvians had other ideas. Down 0-1 to Andreas Eder’s goal midway through the first period, the Baltic nation hit back with two goals in 11 seconds to take a lead into the first intermission. Gatis Sprukts and Frenks Razgals were the scorers. Marc Michaelis, a Canucks prospect loaned back to his native Mannheim for the start of the DEL season, tied it up for Germany in the third but Razgals came up with an overtime winner to give Latvia the trophy.

The first action, on Thursday, ended in a 5-2 win for the host. First period goals from Balint Magosi and Istvan Bartalis set Hungary on its way. Poland rallied in the middle frame, getting back to 2-3 thanks to markers from Martin Przygodzki and Mateusz Bryk but the Hungarians took the game away with two unanswered goals in the third period.

After a comfortable win in the first game, the Magyars also took the second encounter. This was a tighter affair, with Poland leading twice before Istvan Sofron scored two to give the home team another victory.