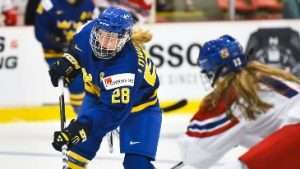 With the Women’s Euro Hockey Tour cancelled during the International Break for national teams in November, a spontaneous tournament of the three Scandinavian countries had the most to offer for fans of women’s ice hockey at the end of last week.

Traditionally Finland, Germany, Russia and Sweden would have met in a four-team tournament last week or a Four Nations Cup be held with the North American teams and their top rivals from Europe. But 2020 is not a normal year and due to the global pandemic the teams decided not to meet for a tournament of that scale.

Many national team camps were therefore cancelled for men and women, senior and junior teams, while others held camps without games or tried to find alternatives in their neighbourhood. Born out of sheer necessity was a “Battle of Scandinavia” with the top Scandinavian countries facing each other.

This hasn’t happened often since Sweden used to play with the top nations. But since sensationally winning Olympic silver in 2006 with a semi-final win against the United States the team has developed from a medal contender to a team battling against relegation in the last few years. At the last Women’s Worlds in 2019 the impossible happened and Sweden’s “Women’s Crowns” (Damkronorna) were relegated from the top division – as first Swedish team in history and in any category.

With relegation the Swedish women’s team also lost its automatic entry at the next Olympics and has to go through a qualification tournament and due to the pandemic last spring it still has to wait for a chance to correct the mishap and earn promotion back to the top level.

At the 2021 IIHF Ice Hockey Women’s World Championship the two relegated teams Sweden and France will be replaced by Hungary and Denmark. Therefore the three-nation tournament last week was a chance for Sweden (9th in the IIHF Women’s World Ranking) to prove on the ice whether they are still the number-one women’s ice hockey nation in Scandinavia in a rare clash against their western neighbours from Denmark (11th) and Norway (13th).

The first game held in Harnosand against Norway sent a clear message as six different players scored in a 6-0 win. Shots on goal favoured Sweden 40-9.

Denmark, the Swedes’ “replacement” at the next Women’s Worlds in Halifax, made it more difficult for the host country in front of 205 fans – almost a sell-out according to the attendance restrictions – in Sundsvall and were leading the game longer than their more famous, yellow-and-blue opponents despite being outshot 33-23.

At 15:18 Nicoline Jensen tied up a Swedish lead by Lina Ljungblom that had only lasted for 25 seconds.

The Danes also reacted fast after the first face-off of the middle frame. Josefine Persson gave the red-and-white team a lead after 24 seconds that stayed for most of the period. At 15:55 Josefin Bouveng tied it up on a 5-on-3 power play but less than two minutes later Persson scored again to give Sweden a 3-2 lead.

The Copenhagen native is one of eleven players on the Danish roster who plays here club hockey in Sweden. She moved over in 2015 and is currently with Lulea. Denmark’s Swedish coach Peter Elander, who led the Damkronorna during its better days including the historic Olympic silver medal in 2006, has become the bench boss for the Danish women’s national team last year.

In a hard-fought and balanced third period it was another Josefine who wrote the next chapter. At 12:50 Holmgren scored another power-play goal for Sweden to tie the game at three and 91 seconds into overtime Michelle Lowenhielm scored Sweden’s game-winning goal again on a power play.

In this game for Scandinavian honour the Swedes succeeded in good timing as they prepare for 2021, which shall be a year of the redemption for the Damkronorna. At the 2021 IIHF Ice Hockey Women’s World Championship Division I Group A next spring in Angers the Swedes will play host France, Norway, Austria, Slovakia and the Netherlands for promotion. In August they will host one of the Final Olympic Qualification groups where they will meet France and Slovakia (as well as a qualifier) again with the top team advancing to the Beijing 2022 Olympics.

While Denmark couldn’t beat their big rival head-to-head on ice, they can still enjoy their top-level status for the Women’s Worlds in Halifax and used this opportunity with a brave game against Sweden and a 4-0 win against Norway. Persson scored her tournament-leading third goal, Silke Glud netted two in the game.

In Halifax the Danes are seeded in the lower of the two-tiered groups and will play Japan, the Czech Republic, Germany and Hungary. The top-three of the five teams will advance to the quarter-finals against the Group A teams while the last two will be relegated.

Good and bad news for Finland

Another Northern European country played its games at home with Finland. The lionesses played two male opponents, the under-18 teams of Assat Pori and JYP Jyvaskyla, and head coach Pasi Mustonen hoped to have games at a pace comparable to their top opponents in women’s hockey.

The camp started well with a 3-2 win against Assat after goals from Nelli Laitinen and Susanna Tapani in regulation time and Petra Nieminen and Michelle Karvinen in the shootout.

The day after the lionesses didn’t seem to have enough energy left. Viivi Vainikka tied the game in a first period that ended 1-1 but eventually the JYP juniors won 6-1.

Things became worse one day later when a player previously tested negative showed Covid-19 symptoms and was tested positive at the end of the camp in Kuortane causing quarantine for players of the women’s national team and its opponents.

Other games were not held in women’s hockey during the international break. Two Hungary vs. Austria games in Budapest were cancelled in the last minute due to increasing Covid-19 numbers and restrictions in Hungary. Most other countries either cancelled their camps entirely such as the Czechs, Germany, Russia and Switzerland or held it without the usual exhibition games such as the United States.