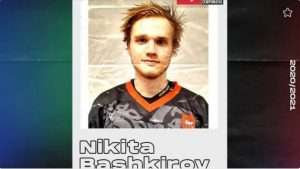 On November 6, Russian forward Nikita Bashkirov signed a contract with the Lithuanian club Baltu Ainiai Kaunas. Previously played in the Sweden for Olofströms IK. In his debut game in the Lithuanian Championship, Nikita scored 4 goals and added two assists, as his team beat Klaipeda (12: 3). In a conversation with one of our journalists, the former Stalnye Lisy forward told why he decided to leave Sweden and also shared his emotions about the first match with Baltu Ainiai Kaunas.

Why did you decide to leave Olofströms IK?

At Olofströms IK I didn’t get enough playing time. At the same time, not all the conditions for my arrival there were fulfilled by the club’s management, and I had problems with the English language. I constantly had to ask Pavils Galsons to translate all the coach’s requirements to me. Then the second wave of coronavirus began and the games in Sweden were postponed for a month. Then I decided that something needed to be changed so that all this would not last the whole season. I began to communicate with the management of the club so that they would let me go.

How did you get the offer to play in Lithuania?

While I was solving issues with the club’s manager, I was looking for options in other countries for a comfortable continuation of this season, and through some friends, I  found a good Belarusian coach in Lithuania – Alexander Mikheyonok . I talked with him, he just said that they have one place for a foreign player and they will wait for me, as I will resolve all issues with “Olofströms IK”.

How would you comment on the debut game in Lithuania?

The debut game was quite interesting, as “Klaipeda” had one of the best goalkeepers in the league. The entire game was played practically in the opponent’s zone and there were a lot of chances to score. we did not start well in the first half of the first period of the game, but then we broke through and the result was a 12: 3 defeat of Klaipeda.

You finished with 4 goals and two assists?

I didn’t expect it to turn out that way. The last time something like this happened to me was in my youth hockey days.

Did you know anything about the local championship before coming to Lithuania?

My friend here is Makar Tokarev. Before my arrival, he told me everything: about the city, management, coaches, living conditions and the level of hockey. Therefore, nothing surprised me when I arrived in Lithuania. I feel at home here. The team received me well.

How is the team preparing for the upcoming game against the 21-time national champion Energija Elektrėnai?


It’s just another game for us.  We prepare for all games the same way. We respect all of our opponents in the league.