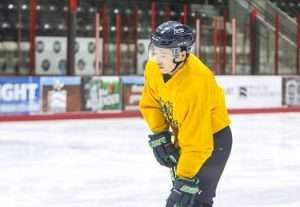 When you think of hockey hotbeds, Japan is probably not the first place that comes to mind. For the North Iowa Bulls though, the country has had a sizable impact on the team’s 2020 success so far.

Second-year Bulls’ player Sota Isogai was named the NA3HL West Division Star of the Week for the week of Nov. 3, after scoring two goals with one assist in the Bulls’ record-setting 13-3 win over Willmar on Oct. 30. Isogai, a native of Nagano, Japan, is tied with Garrett Freeman for the team lead with six goals this season.

Isogai has been playing abroad for several years, with two seasons in Russia and two in Austria before coming to the United States.

Aside from Isogai, the Bulls also have first-year forward Shota Kaneko, of Tokyo, on the roster. This season is Kaneko’s first in the U.S., after he spent last season as a member of Japan’s U20 team. Kaneko currently has two goals on the season, along with three assists. 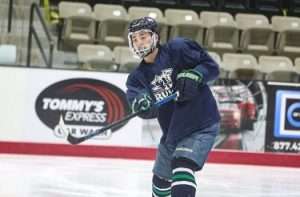 Isogai and Kaneko are not the first Japanese born players to have suited up for the Bulls. Kohei Sato played for North Iowa for parts of three seasons from 2014-2017, before going on to play at the University of New Hampshire, becoming the first-ever Japanese born player to play Division I hockey.

“We like the Japanese players in that they are smart hockey players,” Bulls head coach Todd Sanden said earlier this season. “The first year is a bit of a language barrier, but the universal language of hockey is pretty transparent, and easy for those guys to understand. We’ve been blessed to have some very good Japanese players in our program.”

With one year under his belt, Isogai has grown more comfortable in a Bulls uniform. His English has improved by a lot over last season, and he has turned into a key player for the team.

Sanden was thrilled when Isogai announced he would be coming back, and said that Isogai’s return has been a big factor in the 9-3 Bulls’ success this season.

“Certainly we are excited when guys decide to come back, but with so many options and teams available at this level and different countries at the tier two level, it is never a given that guys are just going to return,” Sanden said. “We were very excited when he decided to come back, and he had other options, for sure. We’ve made him a captain here too. His return certainly is an important piece for our team.”

Isogai and the Bulls first connected at a tryout in Edina, Minnesota, in 2019. After trying out for several teams in the NA3HL, Isogai made the choice to join the Bulls, where he scored 22 goals in his first season in the states. 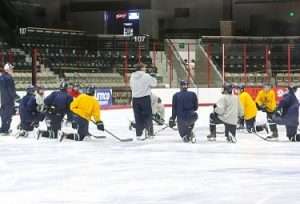 “It’s been kind of a lucky, opportunity-based situation for us,” Sanden said. “Sota came to us on a bit of a bluebird opportunity. A guy reached out, he tried out for a couple teams in our league and ended up picking our team, which we are very thankful and fortunate for.”

Kaneko came to the Bulls through an advisor the team has worked with in the past, and who helped the team acquire Sato several years ago.

For both Isogai and Kaneko, the biggest adjustment between Japan and North Iowa has been the language, but both of them have been working hard to be able to communicate with their teammates.

So far, the differences between Japan and Iowa seems to fall by the wayside once the pair step onto the ice. Hockey in America is more physical than hockey in Japan, according to Isogai, but he and Kaneko have adjusted to it well.

“Physicality certainly is a part of the game, and they have integrated into that part of the game seamlessly,” Sanden said. “Shota initiates a lot of physicality when he is out there. He gets in quick on fore checks, and he separates guys from the puck with his body. We haven’t seen any tentativeness, they both are able to handle the physical style of play that we play in.”

This season, Isogai has felt a lot more comfortable both on the ice and off. With his English skills improving, and his body more adapted to American hockey, he has become a crucial part of the team’s attack.

“This year, I have better English,” Isogai said. “Everything is better. I’m more fast, and more strong.”

But this year has been an especially strange one in NA3HL hockey, with COVID-19 changing much of how the team goes about its day to day life. For foreign-born players, it can be an especially worrisome time as the pandemic continues to spread. Isogai says that his family hasn’t expressed too much concern about the virus, as the team is taking precautions.

Once you look past the language, the hockey style, and the other cultural differences that exist between Japan and the United States, there is one thing that Isogai, Kaneko, and the American-born Bulls can all agree on.

The glory of American cuisine. 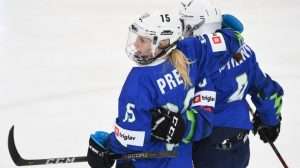 No other player has collected as many goals, assists or points for their country at the IIHF Ice Hockey Women’s World Championship program than Slovenia’s Pia Pren.

Through 57 World Championship games, Pren has amassed 65 goals and 71 assists for a total of 136 points. The prolific scorer has demonstrated her offensive prowess wherever she’s played – through 66 games in the Slovenian women’s hockey championship between 2006/07 and 2019/20, Pren had a staggering 178 goals and 171 assists. These 349 points are over 100 more than that of the league’s second highest scorer, Jasmina Rosar (230).

With her talent, Pren managed to play in one of Europe’s top leagues, the SDHL in Sweden, where she was fifth in scoring for SDE last season with 18 points (4+14) in 32 games.

How did Pren become the powerhouse forward she is today? It all started in the Slovenian capital of Ljubljana when she was five years old.

“The coaches at first were a little skeptical, like how is that going to go with a girl among the boys,” Pren said of when she first joined a local hockey school. “After some time they gave up and they gave me a chance.”

Everybody believed that it was going to be a month and then I’d have had enough, but it turned into a little longer time.

“A little longer time” is an understatement. Now 29 years old, Pren is not only still competing, but has been part of the national team program for nearly two decades.

“Pia was, from the beginning, the kind of girl who liked competing with boys and wanted to be better than the boys,” said Slovenian national team and Olimpija Ljubljana coach Franc Ferjanic, who first met Pren when she was six. “She worked really hard and her skills are now really at a very high level.”

Starting from a young age, Pren has dedicated hours towards her shot.

“I don’t have a strong shot, so I always try to work on accuracy,” she said. “When I was younger I spent quite some time at the hockey arena on a little synthetic ice rink we had beside the actual one shooting on targets that were set on the goal posts.”

Pren was just 12 years old when she made her debut with the national team in 2004, a few months after playing in a U13 boys’ tournament in Canada. The extra work on her shot paid off, with Pren contributing four goals and three assists in her inaugural Women’s World Championship tournament, which she followed up with a whopping 10 goals and 9 assists at the 2005 tournament. 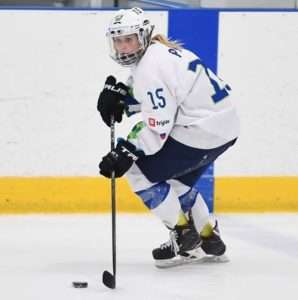 Pia Pren in action with the Slovenian women’s national team

Having spent her childhood playing with boys, these early experiences as a rookie with the national team were also her introduction to playing with other women.

“I had almost 20 moms beside me, everybody taking care of me,” she said. “At the same time, I think there was some pressure as well. It’s a big, big stage for a 12-year-old for sure.”

However, Pren proved that she could handle herself on that stage, becoming a consistent face on Slovenia’s roster and collecting numerous accolades at the World Championships. She has been named Best Forward five times and Top Player on the Team six times, in addition to leading Slovenia and the tournament in goals, assists and points on multiple occasions.

Sure, it’s not the top level. With just 82 female players in the country to choose from, Slovenia competes in the fourth tier of the Women’s Worlds and is ranked 24th in the 2020 IIHF Women’s World Ranking. But wherever Slovenia plays, Pren shines.

The last World Championship was one of Pren’s best, with her, Sara Confidenti and Julia Blazinsek making headlines with their combined 47 points (20 of which belong to Pren) in five games – not to mention that Slovenia won Division II Group A gold after three years of barely avoiding relegation to Group B. 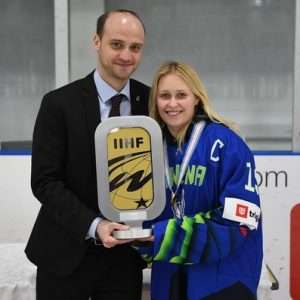 Once the pandemic is over and the full World Championship program will be back, Slovenia will for only the second time in history (after 2007) compete in the third tier of international women’s hockey and that’s also thanks to Pren, who has captained the national team since 2014.

“I don’t consider myself a goal scorer – maybe stats say [I am],” said Pren. “I am more of a passer, I love to pass and create for my teammates. Myself and my former teammates agree that I’m shooting way too little and passing way too much even when I should shoot, so that’s something I still have to work on.”

“I don’t have any particular favourite way to score. I like if it’s a team effort, a nice set-up, or a well-executed power play or counter-attack.”

Pren’s team-first mentality is evident in the way she speaks about her own skills and successes, and likely lends well to her role as Slovenia’s team captain.

“Her strengths are her skills, hockey sense and leadership,” said Ferjanic. “As a captain she has a strong personality and because of all her qualities, all the players respect her.”

There is no doubt that Pren, with her offensive talent, extensive experience at the World Championships and in leagues in Slovenia, Austria and Sweden, and competency as a captain, is helping propel Slovenia forward on the world stage.