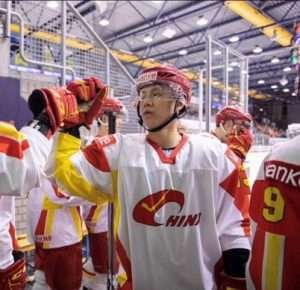 Richmond’s Julius Zhang, suited up for his native China

Three years ago, Julius (Dehan) Zhang would never have believed what was coming down the road in his fledgling professional hockey career.

If someone had even hinted to the Richmond Seafair Minor and Delta Hockey Academy product that he could potentially line up in the Olympic Games – suited for China, against Canada – he’d have thought you certifiable.

But that is exactly the prospect facing 21-year-old Zhang, a Richmondite in every sense of the word, who emigrated from China as a young child, before being selected at 18 for the Chinese national hockey program.

Since then, he’s been playing second tier club hockey in Russia for a Chinese-based team, until the pandemic halted most professional sports.

Zhang is now hoping to return to China in the new year to begin his home nation’s preparations for an Olympic games debut in Beijing in 2022, where they will face Germany, the U.S. and, of course, Canada.

“It’s crazy. In fact, the whole last three years has been crazy,” said Zhang from his parent’s home near Williams Road and Railway Avenue.

“It would be amazing (to face Canada). If you told me this five years ago…I would never have believed it in a million years.

“I’ve gotten lucky with all these opportunities. I have a Chinese passport, I’m only a permanent resident here.

“In order to play in the Olympics for China, you need a Chinese passport and China is one of the only countries that doesn’t allow dual citizenship. They’ve been trying to get players with Chinese-Canadian heritage to go over to play, to strengthen their program.

“There are some ex-NHL guys. But the problem is, they don’t have Chinese passports. They’re trying to get it so they can play in the Olympics.”

Zhang, who has turned out for the Chinese national U18, U20 and men’s teams, admitted his passport situation gives him a little shove up the ladder, but he’s more than ready to grab it.

As for his native nation’s actual chances competing against the powerhouses of hockey, Zhang said they’ve got a little more than a year to improve.

“As the host country, China received automatic qualification and they obviously want to do well,” said Zhang, who has been training every day since the pandemic and playing some hockey with other pros and university players.

“We’ve always had high level Russian or European coaches. There’s a lot of resources being poured into it. In China, hockey is still new but it’s growing rapidly.

“They have the resources at grass roots level and, of course, they have a huge population, so they will get better.

“I take a lot of pride in growing the game in China. I’m not quite a pioneer, but a role model. It’s a very proud country.

“But as far as I’m aware, I’m the only player on the team who grew up in Canada.”