25th anniversary of the first professional match in Mexico

Exactly 25 years ago, on December 1, 1995, the first professional ice hockey game was played in Mexico. The Toreros from the Mexican capital hosted the Eugene Snowcats from the North American League. Prior to this match, the Mexican team played only two games, both against the same “Snowcats”, and both ended in defeat with a score of 9: 6 and 8: 4, respectively. The matches took place in Oregon However at home, the Toreros were able to dominate the Snowcats and won with a score of 7: 2 scoreline. 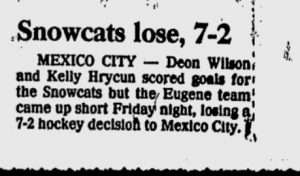 Then the Torero played another game against Eugene, which ended with their third defeat, and after a few days the Snowcats ceased to exist.

About two weeks after the team disbanded, the league itself also died, having played only 8 matches in total, but there are rumors that those two matches between the Mexicans and the Snowcats were the only official ones, and the rest of the matches were no longer counted in the NAL, but the league itself was formed and disbanded for money laundering purposes.

The league featured five teams the Eugene Snowcats, Las Vegas Ice Dice, Los Angeles Bandits, Mexico City Toreros and Vancouver Venom. Only foreigners played for the Mexican team that was made of North American Players and Russians, including the Russian Oleg Zak, who went straight from Petrozavodsk, Russia to Mexico. Oleg Zak would become the coach of Turkish national hockey team a few years later.

Their first goal was scored by the Slovak Igor Majesky assisted by Larry Bernard. The goalie was James Jensen and some of the forwards included Dusty Mclellan and Peter Cox. But the most well known player on the Mexican team was undoubtedly defenseman Link Gaetz who was selected 40th overall by the Minnesota North Stars in 1988.