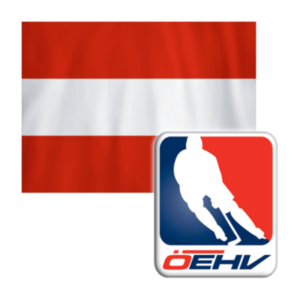 By Nathaniel Oliver – The Hockey Writers

Every World Junior Championship has to have a potential Cinderella team, right? It will be no different when things get underway in Edmonton and Red Deer. This time around though it is the Austrians who have done the unexpected and now find themselves playing with the big boys.

Defeating Slovenia 4-1 nearly a year ago at 2020’s U20 Division I Group A tourney, Austria ensured promotion into the topmost division. They haven’t been there since 2010, so this fairytale has been a long time in the making.

That does not mean however that the Austrians will be a pushover in Alberta. They lost only once in Minsk as they earned advancement, and stood above formidable nations in the likes of Norway, Latvia, Belarus, Denmark and Slovenia. Three Austrians were in the top-10 for scoring in the tourney as well, and one of them will likely return for this year’s team.

The major difference this time around though is that Austria is now in a pond with much bigger fish. They will have their work cut out for them in Pool B alongside the Americans, the Czechs, the Swedes and the Russians. If Austria is to have a shot at staving off relegation, then they will need to rely most heavily upon their NHL-caliber talent.

THW breaks down how Austria’s roster ought to take shape.

The Austrians will have neither Luca Egger or Alexander Schmidt – the two netminders who got them to Edmonton to begin with, most particularly Schmidt. Therefore, it will need to be a newcomer who takes over the reigns as the team’s last line of defense. There are at least six goalies who are in consideration, but we will take a look at their three best bets.

Sebastian Wraneschitz has maybe the most blended experience of the goalies available. He currently plays for the Vienna Capitals in his homeland, but he has also spent time in both Sweden and Finland. Wraneschitz is rather smallish for today’s netminder at 5-foot-11 and roughly 160 pounds, but his time spent facing Scandinavian shooters may prove valuable. He has also represented Austria at IIHF U18 competition. Wraneschitz has posted a 2.20 goals-against average and a .908 save percentage through four games this season with Vienna.

We like Jakob Brandner’s size at 6-foot-3 and just shy of the 200-pound mark. He is also one of just a few Austrian goalies who is 19 years old and might have Edmonton/Red Deer as his only shot at a World Juniors. Similarly to Wraneschitz, Brander has spent some time playing in Finland. He currently plays for Titaanit in Suomi-sarja – the third-highest league in the Finnish system. Brander’s numbers in Finland are not the greatest (4.02 GAA, .888 SV% this season), but we see his size, age and experience as being what could get him selected.

Alois Schultes has proven to be very solid in the various levels of competition in the Austrian leagues. Since the 2016-17 season, Schultes save percentage has gone up each season, including most recently in 2019-20 with a .921 SV% with the EC Salzburg U20 squad. In fact, that same save percentage and his goals-against of 2.48 in 17 games led all goaltenders in the entire league. Schultes is another 19-year-old. We project him to not only make the final roster for Edmonton, but to have a legitimate shot at being the starter.

There are a lot of defensemen to choose from for this roster, but we will guarantee you that Thimo Nickl makes the cut. The 6-foot-2, 175-pound blueliner is a 2020 4th-round draft selection of the Anaheim Ducks. Nickl has already played for Austria’s World Junior team for their previous two tournaments, and captained their U18 squad in 2019 where he was named Best Defenseman in Division I B. Nickl currently plays in the Quebec Major Junior Hockey League (QMJHL) for the Drummondville Voltigeurs. He went 10-29-39 for scoring in 58 games in 2019-20. 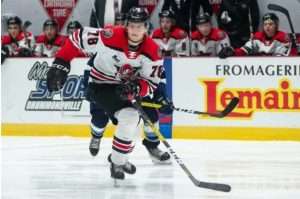 Thimo Nickl , shown here with the Drummondville Voltigeurs, captained the Austrian’s 2019 Division I B U18 squad

Martin Urbanek should be another returner for the Austrians. He was with the team in Minsk, as well as the U18 group that Nickl captained. Urbanek is smaller for a rearguard – 5-foot-8 and just over 150 pounds. He will not generate a lot of points either, but he is good in his puckhandling and passing. Urbanek will be a defender the Austrians rely on because of his experience and his ability in his own zone, particularly to bail out less experienced netminders.

Sizable defender Niklas Wetzl is another player we see making Austria’s final roster. Of all the defenders in the mix for this team, Wetzl is the most physically imposing at 6-foot-2 and over 200 pounds. He is a product of the South Florida Hockey Academy 18U team and he captained the group in 2019-20. Wetzl has played in the USA, Switzerland and has played this current 2020-21 season in Finland with TUTO Hockey at the U20 level.

2020 opening round draft selection Marco Rossi is going to be Austria’s most critical player. The Minnesota Wild selected him with the 9th pick of the draft. Rossi lit up the Ontario Hockey League (OHL), including a whopping 120 points (39 goals, 81 assists) in only 56 games in 2019-20. He is very dangerous around the net, does not shy away from the physical areas and is a superb playmaker. Rossi will need to be firing on all cylinders in Alberta to keep the Austrians competitive. 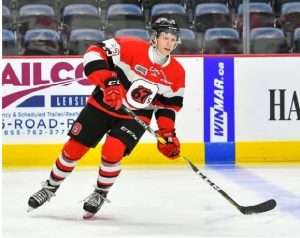 We really like Senna Peeters. He is also a returner from Minsk, and was one of their better scorers Division I A tourney – 3-3-6 in scoring through five games. Peeters has experience playing in the QMJHL for the Halifax Mooseheads. This current season he has played in Sweden for Rögle BK junior team. He is a bigger forward at 6-foot-1 and near 200 pounds, and he uses his size and strength quite well to score from around the net.

We predict that this will be the fourth and final U20 tournament for Tim Harnisch. He is more or less what you call a “utility player” for the Austrians. Doesn’t put up points, doesn’t have great size or speed for that matter, but Harnisch is responsible in all three zones and has a savviness to him. He is a bit of a rarity when it comes to the amount of times he has represented his homeland at an IIHF U20 tourney, but it is because he is a competitive and dependable player.

There is good news and bad news when it comes to the Austrians.

We always like getting the bad news over with first, so let us begin there: this team is primarily challenged with their goaltender. Of all of the netminders in consideration to make this team, not one particularly stands out over the other. If they had a heralded netminder who could keep them in games of his own accord, they might have a chance to steal a game or two. That is not really the case. Rather, the Austrians’ goaltending is their weakest link.

The good news is a bit more positive and there is more of it.

Marco Rossi is a bona fide elite player in this tournament, and he would be no matter what team he was on. His presence not only gives Austria credibility, but he also has the capability of getting them the goals that they need here – whether he is setting them up or scoring them himself.

The other positive note in our eyes is that many of the Austrians have global experience, including player in the various Canadian junior leagues. They are a well-rounded group in that regard, and are more experienced in the North American and Scandinavian games than similar “on the cusp” teams like Kazakhstan and Belarus were in recent World Juniors.

Prediction: the Austrians will not come close to medaling, but they could grab a win here or there based on their experienced skaters. It is only their goaltending that is suspect.