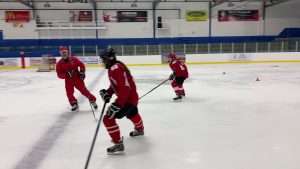 #WATCH: Did you know that there’s a national Lebanese women’s hockey team right here in Montreal? The country assembled its first team in la belle province. We’ll introduce you to Lea Salem, one of the team’s players. More tonight at 6pm. pic.twitter.com/5NxKxvcrFY

“It’s like putting my Canadian side and my Lebanese side together,” Lea Salem, a player for the Lebanese Women’s National Ice Hockey Team told CityNews.

“Also in Lebanon, it’s not really a common sport, hockey there. So I want to represent the country with hockey.

“It makes me proud to be able to represent my country and my roots.”

For Lea and others, playing hockey for the national team of their country of origin gives them a great sense of pride – but also means breaking barriers, and showing the world that hockey isn’t just for men.

Ralph Melki, Vice President of Hockey Operations of the federation said that although hockey isn’t very popular in Lebanon, they were able to recruit 68 female players with Lebanese heritage across North America.

“Why not? I mean if you look into any other nations all over the world, most of them have a men’s and women’s team – the diaspora here in Montreal is a big diaspora that we have, there’s a lot of women and girls playing hockey,” Melki told CityNews.

#WATCH: “Seeing that those girls are playing the sport in Canada & they’re performing, & they’re doing very well at it, why not mix both cultures,” says Ralph Melki, VP Hockey Operations, Lebanese Ice Hockey Federation – they have a women’s team in Montreal. More at 6. pic.twitter.com/4ldWxwrFwh

“I’m very proud because I’m able to represent my home, my real home, and my real nationality and this is something very important for me,” another player, Zahra Dahnoun said.

#WATCH: “I’m very proud because I’m able to represent my home,” says Zahra Dahnoun, who plays for the Lebanese women’s national hockey team, based in Montreal. Tune in for more at 6. pic.twitter.com/8XKvl7EmzI

“I feel like everyone thinks that women aren’t allowed to play hockey, or they’re bad or not as good as men,” Salem added.

“But I feel like some girls could be better. I played on boy’s teams and sometimes I was better, sometimes I was worse, but you always have to put those comments aside and play your best when you’re on the ice.”

Although the girls came from different cities and played at different levels, they all can’t wait to get back on the ice and train as a team when COVID-19 restrictions allow.

“Seeing that those girls are playing the sport in Canada – and they’re performing – and they’re doing very well at it, why not mixing both cultures if you want to say, mixing the Lebanese culture with the Canadian culture, and bring people together,” Melki said.