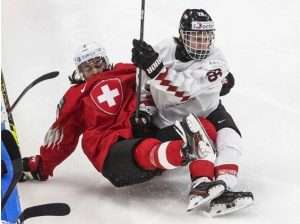 Having endured a selection process, travel issues, and a quarantine period, all while following strict health protocols, members of the Switzerland and Austria world junior teams were just happy to finally get on the ice and play a game.

It did not matter, the contest didn’t mean anything as the first of four exhibition games scheduled prior to the start of the IIHF World Junior Hockey Championship at Rogers Place.

For the players, it was just good to face an opponent again.

“Yeah, it’s nice,” said Austrian forward Tim Harnisch. “It was hard being in quarantine for four days, but it was nice to get back on the ice. I think everybody was looking forward to the game and was excited to play. We competed hard to try and win and unfortunately, we weren’t able to do that.”

Gaetan Jobin, Inaki Baragano and Lionel Marchand scored for Switzerland. Mathias Bohm and Leon Wallner countered for Austria, who went 0-for-8 on the power play.

“It was pretty exciting, the whole team was looking forward to that first game and I think we did a pretty good job,” said Switzerland forward Simon Knak. “It was the first step to get a good start in the tournament, and for our first game on the 25th, we want to keep on doing the same things that we did (Tuesday).”

Switzerland opens the tournament on Christmas Day against Slovakia, while Austria faces the United States on Boxing Day in its opening game.

Austria is grouped with Russia, Sweden, the United States and the Czech Republic. Switzerland is in the group with Canada, Finland, Slovakia and Germany, who are currently still in quarantine after having eight players test positive for COVID-19 after arriving in Edmonton.

“It was awesome for them to play a game,” said Switzerland coach Marco Bayer. “It’s been a long time for them, we’ve just been practicing and they haven’t been with the national team since the summer. For all the guy, all the players, it was really nice to come back and play some games.”

“It was OK, because we rolled four lines and everyone had short shifts, so the legs were good,” Bohm said. “It took a few minutes to get into the game but I think we did OK.”

Switzerland used two goaltenders in the game with Thibault Fatton and Noah Patenaude splitting the duties. Fatton made 13 saves and Patenaude made nine saves. Sebastian Wraneschitz went the distance for Austria, stopping 25 shots.

“We took too many penalties, that’s for sure,” Bayer said. “You can’t play international games like that. If you take that many penalties, usually you’re going to lose the game. But I think the guys did a pretty good job because on the other side they have a really good team from Austria, so we respect that and it’s good for the guys to win the game. That was a positive thing. We learn from that and we keep going forward.”

After the game, Austria was lamenting its inability to score on the power play. Austrian centre Marco Kasper had what will likely be the miss of the tournament, unable to bury the puck into an open net, sliding it across the crease behind Patenaude instead.

“I’m quite happy how my team competed in the game,” Bader said. “I think we were able to skate with the Swiss team and we had a lot of quality scoring chances. Maybe the reason we could not win is that we couldn’t score on the power play. We had a lot of power plays and a couple of five-on-threes and we could not score. I think if we could have scored there, we could have won the game.”

Cole Caufield (Stevens Point, Wis.) scored twice and Trevor Zegras (Bedford, N.Y.) added two assists to propel the U.S. National Junior Team to a 3-2 victory over Finland tonight in its first and only pre-tournament game ahead of the 2021 IIHF World Junior Championship.

“I thought tonight was good overall, I thought some guys were a little tight in the first 10 minutes but that’s what these pre-tournaments games are for,” said head coach Nate Leaman (Providence, R.I.). “I’m glad we played Finland, they’re a really good team, and we found some things that we’re good at and they showed us some of our weaknesses. It’s important we had this game tonight to help us prepare for the next step in the tournament.”

Finland got off to an early lead, scoring on the power play 1:26 into the contest. The U.S. evened the game with a power play goal of its own with just :06 left in the opening period when Arthur Kaliyev (Staten Island, N.Y.) slid the puck past Finland netminder Kari Piiroinen from out in front, after receiving a slick feed from Matthew Boldy (Millis, Mass.). The U.S. had the final 13 shots of the opening stanza, aided by four power plays in the second half of the period.

Caufield scored goals :25 apart in the first 1:39 of the second period to stake the U.S. to a 3-1 lead. He struck first with a one-timer delivered from Zegras, and then followed with a backhander into the upper corner as he peeled around the side of net. Jake Sanderson (Whitefish, Mont.) collected the puck at the blue line, making a great to play to push the puck ahead to Caufield. Finland scored on the power play at 8:23 in what would be the game’s final goal.

Dustin Wolf (Gilroy, Calif.), who played the second half of the game in net for Team USA, stopped all six shots he faced in the final frame to preserve the U.S. lead. Spencer Knight (Darien, Conn.) started the game and made seven saves on nine shots, including back-to-back scoring chances prior to yielding the net to Wolf.

The U.S. will open play in the 2021 IIHF World Junior Championship against Russia on Friday (Dec. 25) with puck drop scheduled for 9:30 p.m. ET. The game will be broadcast live on NHL Network.