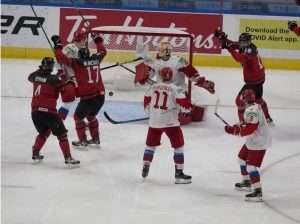 As a warmup for the real thing, these were two heavy hitters — far from infield practice — a ground ball to the shortstop and over to first for the easy out.

Canada vs Russia, the only exhibition before the world junior championship starts Christmas day, but maybe a prelude to a gold medal game on Jan. 5.

Truthfully, it wasn’t great theatre Wednesday because both teams also needed cans of Rustoleum on the bench along with water bottles after not playing in 10 days since the clubs entered the bubble, but it was still the two teams who met in last year’s final.

Canada won 1-0 on defenceman Jamie Drysdale’s goal early in the third but they also lost their captain Kirby Dach to a freak right hand injury a few minutes later when he went to check Russian forward Ilya Safonov in the middle of the ice and came away shaking his mitt. He appeared to have damaged his wrist.

“He’s gone for X-rays and we don’t have an update yet,” said coach Andre Tourigny, who watched as the Chicago Blackhawks forward immediately skated off the ice and down the tunnel behind the bench with 12 minutes left, leaving his linemates Dylan Cozens and Jack Quinn without their right-winger.

Playing Captain Obvious, if the hand is broken or sprained, it’s a damaging blow.

“Kirby drives the play, he tries to bring everybody into the fight,” said Tourigny. “He plays the right way, doesn’t force the game.”

But they may be forced to play without him, and they can’t just call up FedEx have have another player airlifted in to take his spot.

“I would assume the answer is no. After the teams come to the bubble you can’t add a player … if you could Germany would have brought over a lot of (new) players. My understanding is the moment you quarantine in Edmonton, you can’t bring in new players or staff,” said Tourigny, who watched the Germans shockingly have eight players test positive for Covid as they entered quarantine at their downtown hotel Dec. 13.

The Canadians are deep but Dach is an NHLer, who played about 20 minutes a game for the Hawks in the playoffs this summer. He controlled the play pretty much every shift he was on the ice. But, Tourigny has enough weapons in his gun rack to juggle. Maybe he moves Cozens to right-wing and puts Quinton Byfield in the middle.

Byfield was a force, throwing his 212-pound frame into any body he saw.

If he struggled early in camp, he’s come on and the No. 2 selection in the October draft (Los Angeles) was on the ice in the dying seconds as they held the 1-0 lead.

“Q was really dominant … when we left (camp/quarantine) Red Deer we told him we were really happy the way he was competing and paying attention to detail and how he was trying to get better every day,” said Tourigny.

“When we came to Edmonton, he kept going and he was rock-solid in every practice and got much better. I wasn’t surprised by his performance today and there’s a lot of players we could have had there in the last minute when they pulled their goalie, but there was a message there. He earned it and he’s super coachable.”

Igor Larionov’s Russian juniors won the Karjala Cup in Helsinki against senior men six weeks ago so they should have had less rust than Tourigny’s Canadian side with 15 kids who haven’t played a meaningful game since March. But Tourigny’s team was better, even if there were ebbs to go with the flow in the exhibition as Canadian goalie Devon Levi, picked by Florida Panthers about five minutes before the NHL draft ended in October, matched stops with hotshot Yaroslav Askarov, who went 11th to Nashville.

Levi robbed Russian forward Yegor Chinakov, Columbus’s surprising first-round pick in 2020, as he wheeled in alone with five minutes to play to preserve the perfect game.

“I had some butterflies but I always pictured myself playing in this tourney … and it’s a dream come true. This is still a learning experience as I try to get my feet under me,” said Levi, who doesn’t fit the stereotype of a hi-rise NHL goalie at six-feet, but stood tall against Askarov, who is two inches taller and a rare right-catching tender. Only six of the close to 90 goalies who played NHL games last season, catch right.

“The last one (Chinakov) was a partial breakaway but the read I made he was shooting … he didn’t have enough time to deke because one of our defencemen was coming at him,” said Levi.

“What can I say, he’s calm, that’s for sure … made all the saves, rock back there,” said Drysdale.

It was scoreless heading to the third, 39 shots, 39 saves.

Then, the Russians pulled Askarov as per plan and went to backup Artur Akhtyamov, the Maple Leafs’ fourth-round pick in 2020, and he gave up a seeing-eye goal by first-pairing defenceman Drysdale on the first shot he faced four minutes into the last period.

Levi only faced to 23 shots but never looked in trouble, showing why the coaching staff tabbed him as their No. 1 after camp. He stopped two shots in the last 30 seconds in traffic to leave with a big zero.

“He was very solid … he was composed and confident. I wouldn’t say he made it look easy but it didn’t make it look tougher than it was,” said Tourigny.

This ‘n that: Dylan Garand (Kamloops) was the Canadian backup and Taylor Gauthier (Prince George) didn’t dress, so he’ll be the No. 3 goalie for the tournament, playing if Levi or Garand gets hurt…Nashville first-rounder Philip Tomasino didn’t dress against the Russians. Tomasino’s sitting is testament to how insanely deep the squad is. He was fourth in OHL scoring last season with 100 points.